It took some persuasion to get my 72-year-old mum on board with a glamping trip. While camping holidays were a regular feature of my childhood, it’s been years since she last spent a night under canvas.

Happily, in the past decade camping has undergone a transformation, and the invention of glamping has turned a back-to-basics experience into something far more comfortable.

With my mum Margaret, a nine and 12-year-old in tow, we checked into East Shilvinghampton Farm near Weymouth in Dorset. It is part of the Feather Down Farms group – one of the pioneers of glamping on working farms. Originating in the Netherlands, it opened its first UK site in Hampshire in 2006 and the franchise now has 75 sites across Europe, including more than 30 in the UK.

Majestic: Eve McGowan, with her mum, Margaret, and a nine and 12-year-old in tow, checked into East Shilvinghampton Farm. Pictured is one of the eight canvas ‘hideaways’ 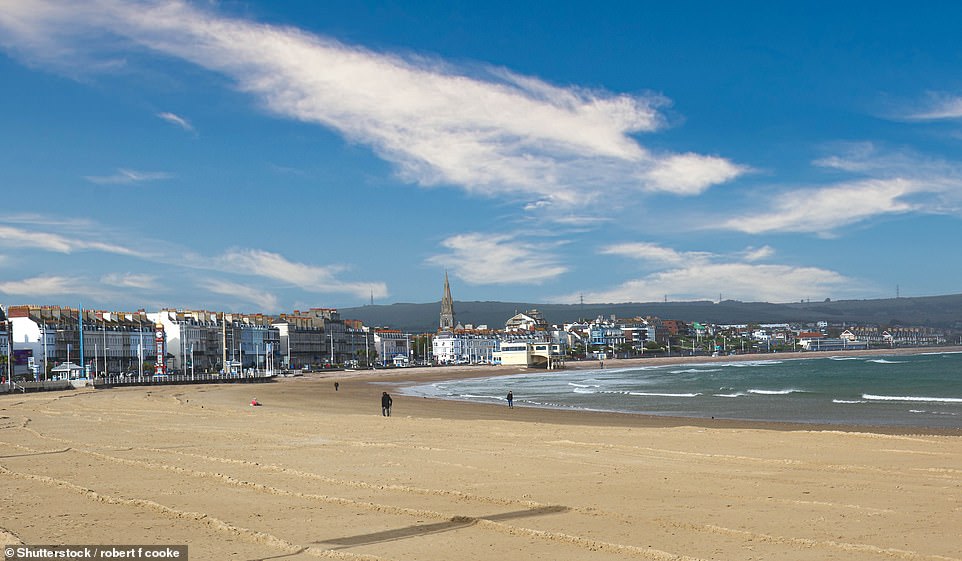 The farm, part of the Feather Down Farms group, is located near the ‘golden sands’ of Weymouth in Dorset (above)

At East Shilvinghampton, eight canvas hideaways are generously spaced in a semi- circle around a gently sloping paddock. All have charming wooden verandas from which to enjoy the big skies and panoramic views across the peaceful valley.

Glampers stay among the animals, which include goats, which children can pet and feed, chickens that provide daily eggs for the children to collect and alpacas you can take for a walk. But the Feather Down experience also has plenty of luxuries to entice reluctant campers.

The hideaways all feature proper beds with duvets and pillows, the kitchen has a sink with running water, there are en suite toilets and some have private showers too. 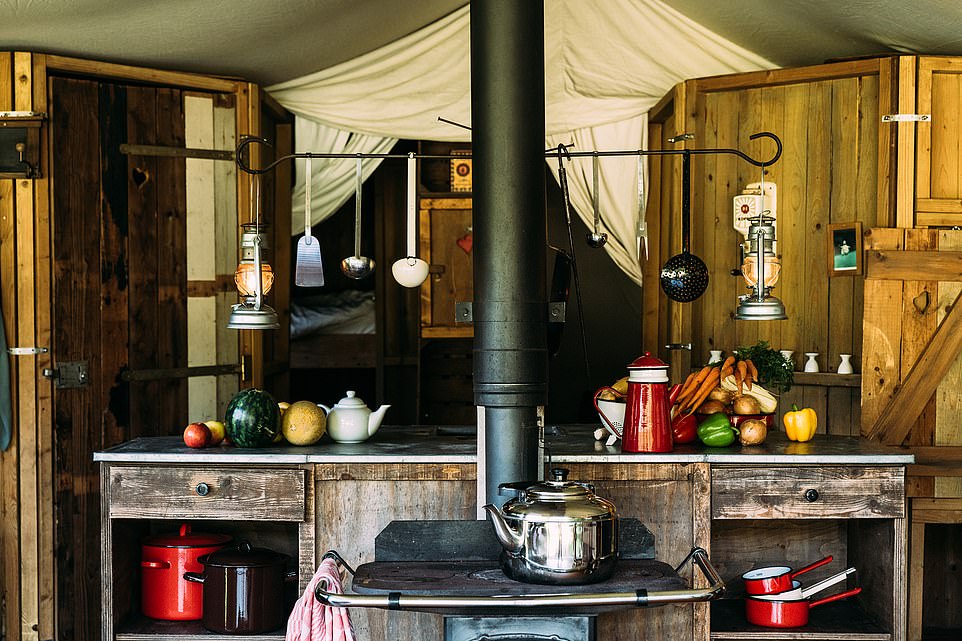 The Feather Down experience has ‘plenty of luxuries to entice reluctant campers’, including a kitchen with running water 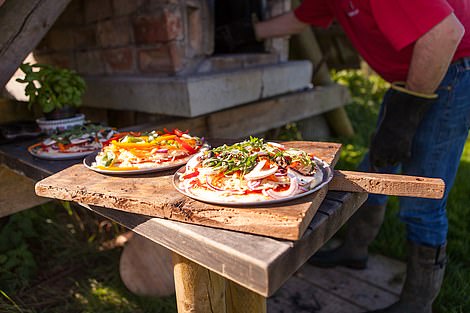 Glampers can order pizzas to cook themselves in the pizza oven

‘It’s not really camping at all, is it?’ says Mum with some relief. Lighting is from tea lights in storm lanterns, oil lamps and charming candelabras over the dining table. The effect, once the sun goes down, is utterly cosy.

Martin and Joby Bartlett run East Shilvinghampton, which has been in Martin’s family for three generations. Martin offers tours of the farm and Joby provides the glamping equivalent of room service, with meals either for you to reheat or delivered hot to your tent (dishes include beef casserole and lasagne).

There’s also a pizza night where guests can order pizzas from Joby to cook themselves in the pizza oven, and breakfast hampers stuffed full of locally sourced goodies.

The farm is ideal for exploring Dorset’s Jurassic Coast. The red cliffs at West Bay (of ITV’s Broadchurch fame) are less than half an hour’s drive away and closer still is Burton Bradstock, where the Hive Beach Cafe is a scenic spot for a cream tea.

Just five miles in the opposite direction are the golden sands of Weymouth, or head a little further on towards Lulworth Cove and the dramatic limestone arch of Durdle Door.

However, staying put while the children enjoy a free-range lifestyle is equally appealing, and the well-stocked honesty shop (where you can also charge your phones, shhh… don’t tell the kids) means you don’t even have to venture out to the supermarket. 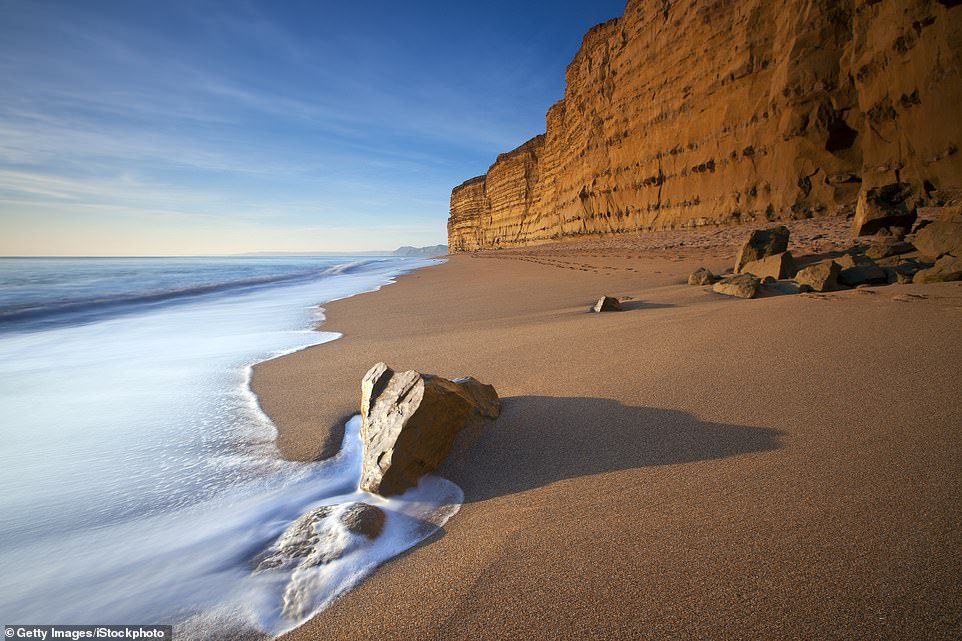 Eve says the farm is ideal for exploring Dorset’s Jurassic Coast. The red cliffs at West Bay are less than half an hour’s drive away and closer still is Burton Bradstock (pictured) 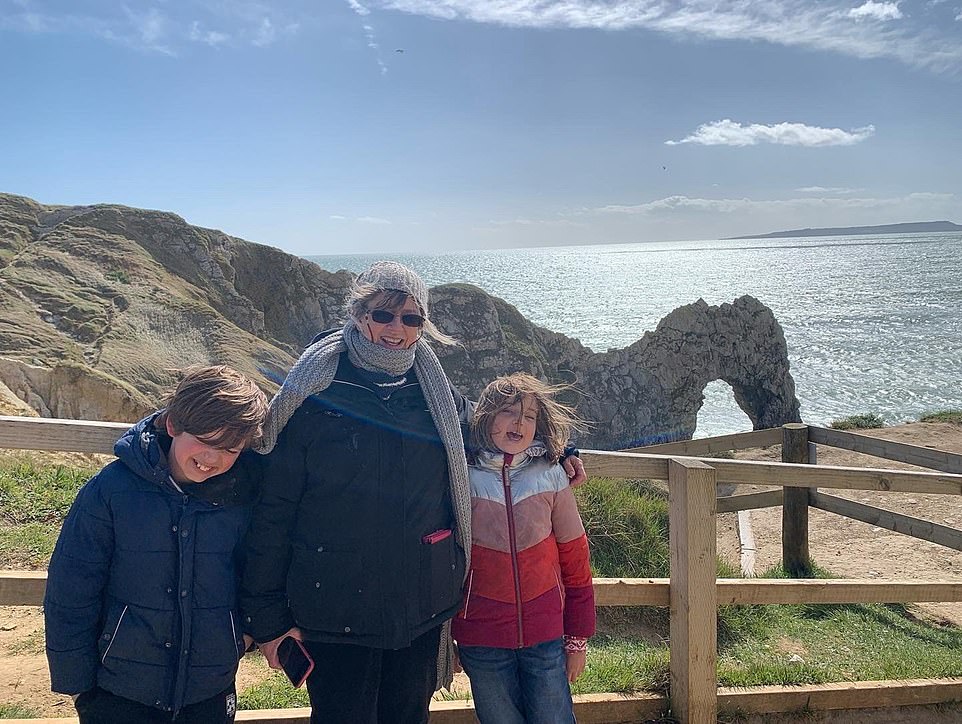 Free range living: The family visited nearby Lulworth Cove and the dramatic limestone arch of Durdle Door. Pictured above at the latter is Granny Margaret with Eve’s children

The site suits family groups with the central fire pit providing the perfect communal meeting point at the end of the day. Feather Down offer takeover weekends where glampers can have the place to themselves.

‘Most guests make a return trip,’ says Martin, ‘there’s too much to see and do for one visit.’

As for Granny? She says glamping is a lovely way ‘to enjoy the fun side of camping with grandchildren without the strain of sleeping on the floor and late-night loo block visits’.

So it’s likely we’ll be back too, and perhaps next time we’ll persuade the other grandparents to join our trip.