Turkey holidays: Discovering the sun, sea and culture (and low prices) of Antalya

What pops into your mind when you think of Turkey? Not Father Christmas, I’ll bet.

Yet here I am at Antalya’s Archaeological Museum, goggling at an icon of St Nicholas and relics, including his jawbone.

The original Santa was a local Christian bishop, born in the 4th century and known for giving unexpected gifts. Once, on learning some girls were in danger of being sold into prostitution, he dropped off a bag of gold anonymously, sparing them that fate.

Welcoming: On his visit to Antalya, Thomas W Hodgkinson discovers that it boasts fantastic food and spectacular artefacts. Above is the city’s picturesque old harbour 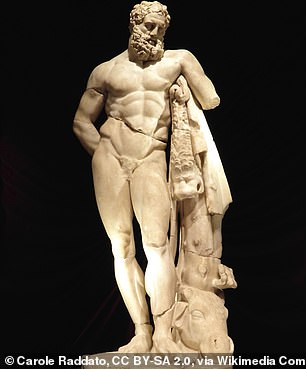 During his visit to the Archaeological Museum, Thomas is ‘awestruck’ by The Weary Herakles sculpture, pictured. Image courtesy of Creative Commons

It’s just one of the surprises that greet me when I visit the friendly seaside resort of Antalya on Turkey’s southern coast.

Another is the cuisine. The idea of most vegetarian dishes bores me, yet my plate of piyaz — white bean salad with tomatoes and hard-boiled eggs, drizzled with oil — is outstanding.

Just as mouthwatering are the shrimps with garlic and mushrooms, all done guveç-style — served in a clay dish in which the oil still sizzles.

‘Oh, the food’s definitely a reason to come,’ says Chrissie Gray, an Englishwoman I meet at the museum. She’s touring the nearby ruins, which is where all of the institution’s staggering statues come from.

I’m awestruck by a particular one of a muscly, bearded man.

The Weary Herakles is a masterpiece: a marble depiction of the Greek hero resting after his labours.

We’re lucky to see it again in its country of origin. Part of it was smuggled to the U.S. in the 1980s and returned only after a campaign. 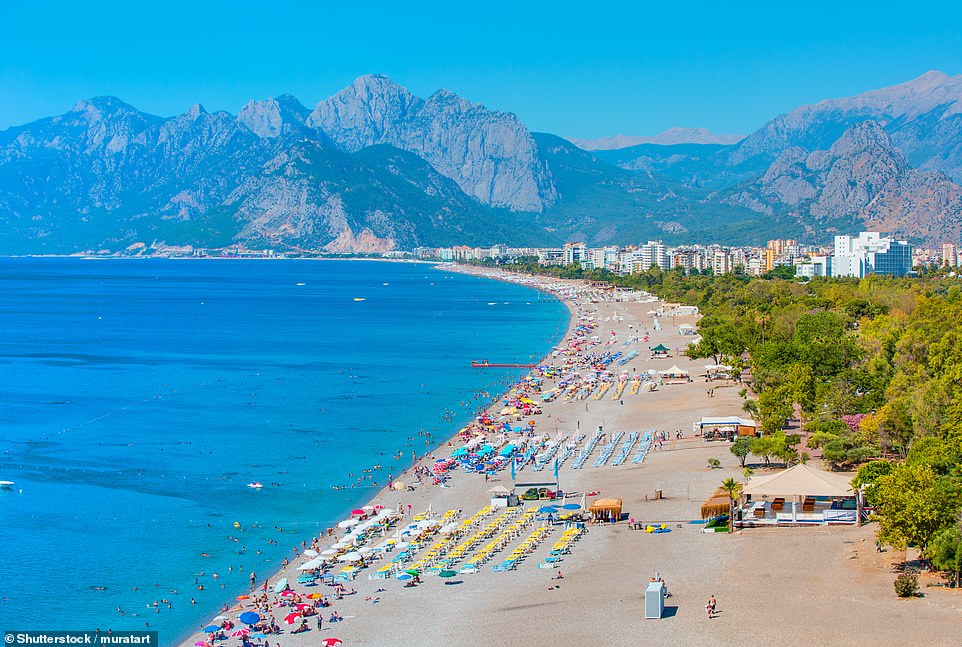 ‘Most come to Antalya for the beaches,’ Thomas reveals. Above is the popular Konyaalti Beach just outside the city 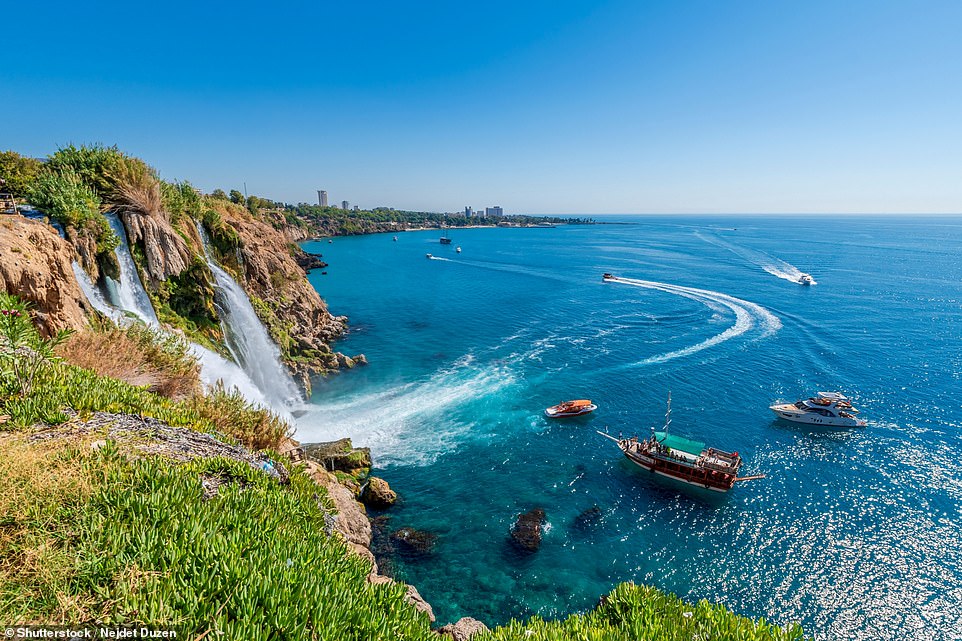 On a boat ride from the old harbour, Thomas admire the minarets and white Ottoman-style houses of the town, and the caves and waterfalls of the coastline. Above is the Lower Duden Falls – one of the waterfalls that dot Antalya’s coast

Most come to Antalya for the beaches. In spring, it’s warm but not hot. I take a boat from the old harbour, but don’t get in the sea. Instead, I admire the minarets and white Ottoman-style houses of the town, and the caves and waterfalls of the coastline. Mainly, I focus on the ancient attractions, such as the Temple of Apollo at Side. Still more spectacular is the open-air theatre at Aspendos. Built in 155AD, it could accommodate 12,000 spectators. When I walk in through the corridor and see the splendour of the place, it takes my breath away.

Legend has it that the local king told his engineers and architects that whoever most impressed him could marry his daughter. The smart money was on the man who built the aqueducts.

But when the king was admiring the theatre from the top gallery, he heard a whisper in his ear: ‘Please let me marry your daughter.’ He glanced round, but there was no one there. That’s when he looked down and saw the tiny figure of Zenon, the theatre’s architect, on the stage. The acoustics were so good, a whisper carried to the gods. Needless to say, Zenon got the girl. 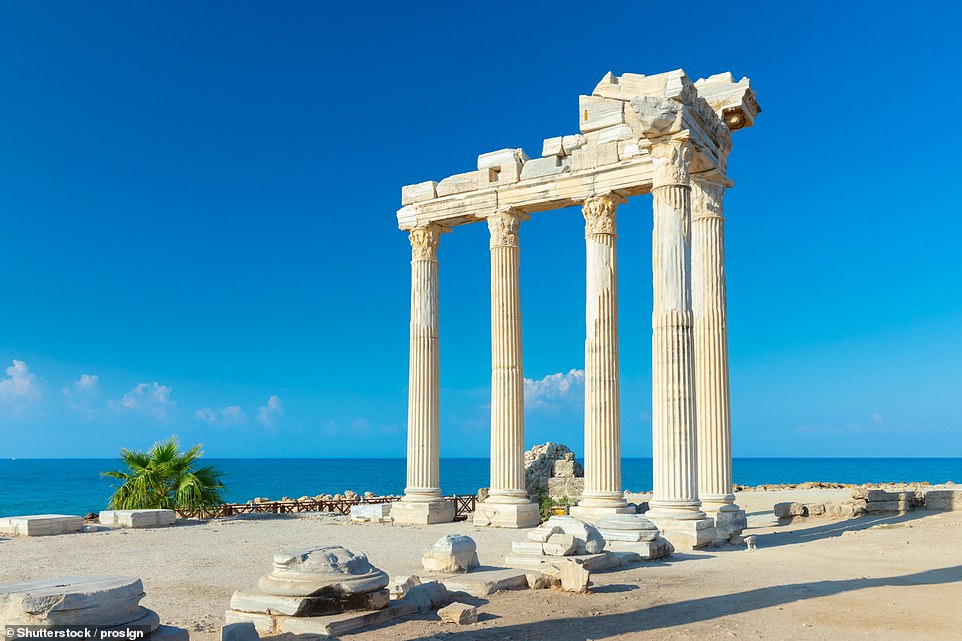 ‘Mainly, I focus on the ancient attractions, such as the Temple of Apollo at Side (pictured),’ Thomas says of his visit to Antalya 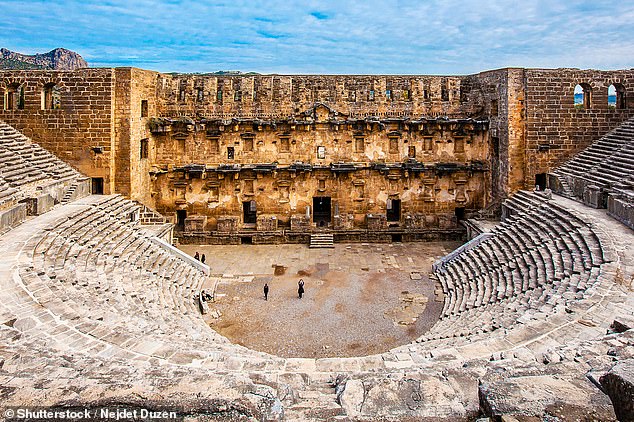 Describing the open-air theatre at Aspendos, pictured, Thomas says: ‘When I walk in through the corridor and see the splendour of the place, it takes my breath away’

Another big plus for Antalya is how cheap everything is. That’s what I’m told by holidaymakers to whom I chat: two sisters from Kent who are here with their children.

‘I just looked online to see what we could afford,’ one says, ‘and this is what came up.’

She’s not wrong. When we enjoy a spectacular three-course meal with wine at the swanky 7 Mehmet restaurant, it sets us back just £25 a head.

I offer up a silent prayer of thanks to Saint Nicholas. Turkey was off-limits last year but now it’s braced for a big summer. Don’t delay. It’s time to make plans .

Thomas was on the inaugural flight of the Turkish Airline service from Manchester to Antalya, with returns starting at £236 (turkishairlines.com). He stayed at the Cornelia Diamond Luxury Golf Resort, which has seven nights all-inclusive from £878. Visit goturkiye.com.

Real-life Star Wars: The lunar landscape of Turkey’s Cappadocia will leave you moonstruck

Ex-footballer whose reaction to £1m jackpot became online hit has quit his job to...