British divers have found a US shipwreck from the First World War that has been missing deep in the ocean since it was sunk in 1917.

A team of experienced deep divers were able to locate the missing vessel on Thursday 40 miles off the coast of the Isles of Scilly.

The USS Jacob Jones was one of six Tucker-class destroyers designed and built for the US Navy before the nation entered World War One.

The impressive vessel was the first American destroyer ever to be sunk by enemy fire.

It was torpedoed off the Isles of Scilly in 1917 by a German submarine. 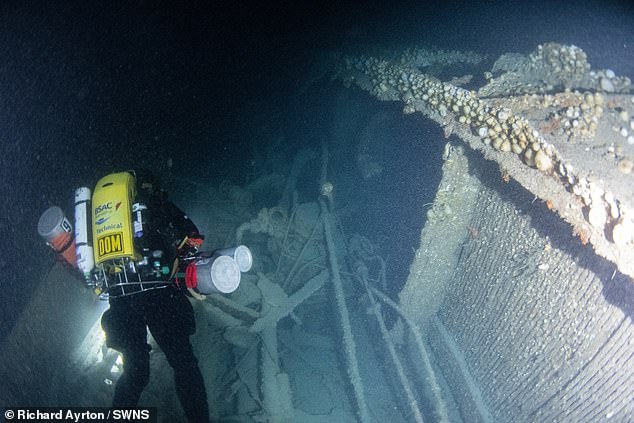 One of the divers who took part in the expedition, Dominic Robinson, noted the importance of the discovery mainly for its historical significance. 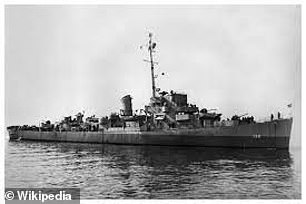 Former glory: the USS Jacob Jones is pictured shortly after her commission before WWI

Dominic, 52, said: ‘This is such an exciting find – Jacob Jones was the first ship of its kind to be lost to enemy action.

‘The ship, lost for over 100 years, has been on a lot of people’s wish lists because of its historical weight.

‘It has a particular interest in America given the amount they spent on designing the destroyers.’

Once the US entered World War I in April 1917, the USS Jacob Jones was sent overseas. 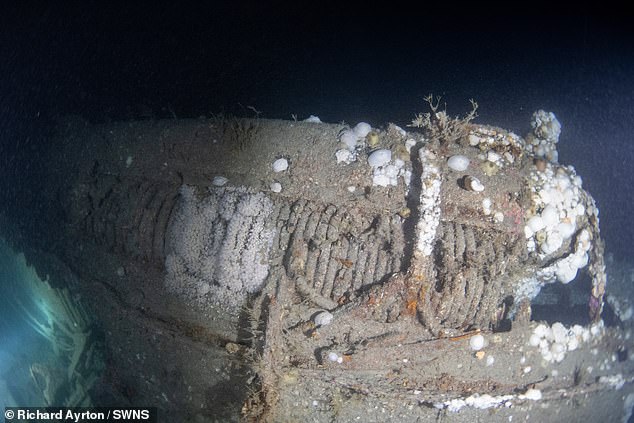 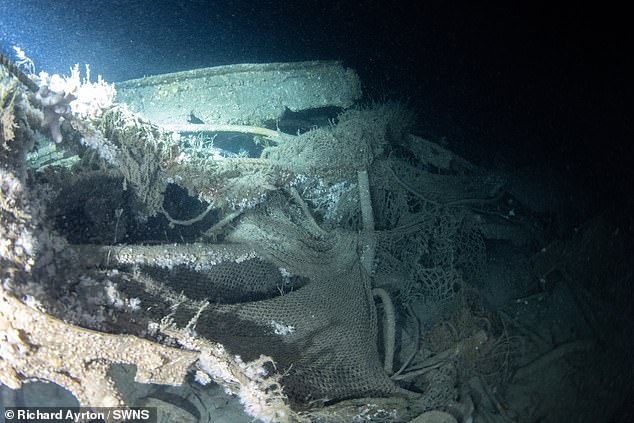 Upon its return to Ireland, the vessel was travelling around 40 miles away from the Isles of Scilly until she was spotted by the German submarine.

Dominic and his team at Dark Star have a long history of deep diving exploration, and have identified wrecks from all over the UK, including the HMS Jason in Scotland and HMS B1 Submarine.

The diver from Plymouth, Devon, added: ‘One of the most interesting things about this vessel was the remarkable stories that came with its sinking.

‘The destroyer’s commander ordered all life rafts and boats launched, but as the ship was sinking the armed depth charges began to explode – which is what killed most of the men who had been unable to escape the ship initially.

‘A few of the crew and officers also tried to get men out of the water and into the life rafts.

‘One name in particular was Stanton F. Kalk, who spent his time swimming between the rafts in the freezing Atlantic water. 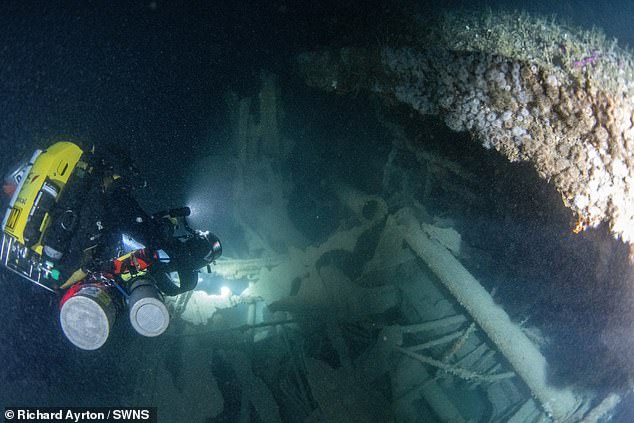 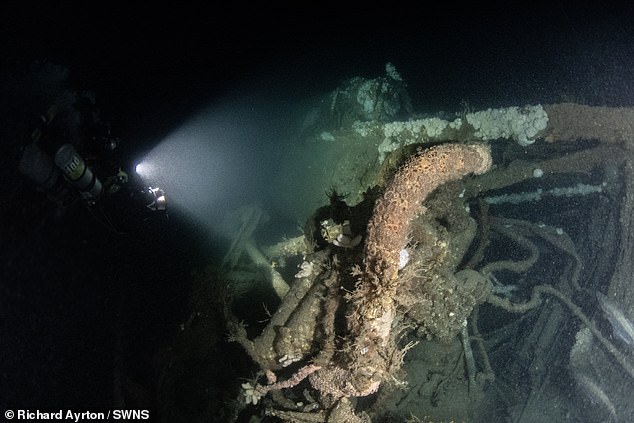 With 150 men onboard, 66 soldiers lost their lives when the Jacob Jones met its watery grave

‘But he ended up dying of cold and exhaustion – he was awarded the Navy’s Distinguished Service Medal for his heroic actions that day.

‘The German submarine commander, Captain Hans Rose, showed an incredible act of kindness – he actually saw all the Jacob Jones men in the water and took two badly injured crewmen aboard his own submarine.

‘He then radioed his enemies at the US base in Queenstown with their coordinates to come and rescue the survivors.’ 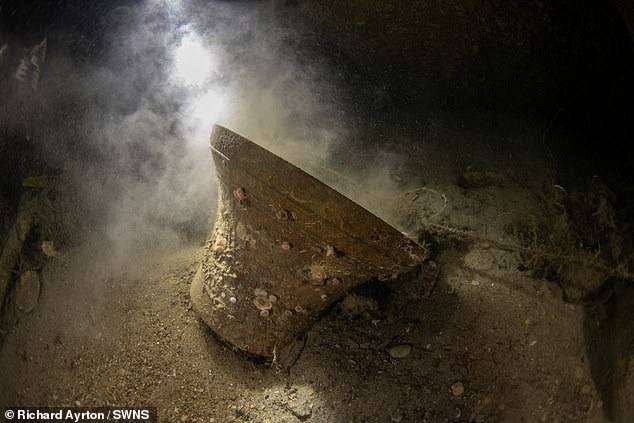 Dominic, who has been completing deep sea divers for over 30 years, explained how he and his fellow Dark Star divers were able to identify the vessel.

Dominic said: ‘We had already decided we were going to look for the vessel, but because of its depth and remoteness it is very difficult tog et to.

‘So we spent this week going to different GPS locations – provided by the UK hydrographic office – who have information on the location of shipwrecks upon the seabed, but do not know which ones they are.

‘We found the vessel on our second day of diving to other wrecks in the area, but there had been many hours of research before hand.

‘On the day, five of us went into the water, and the ship was about 115 metres to the seabed and 110 metres to the top of the wreck.

‘It was very clear that it was Jacob Jones immediately – you can see its name written on parts of the shipwreck. 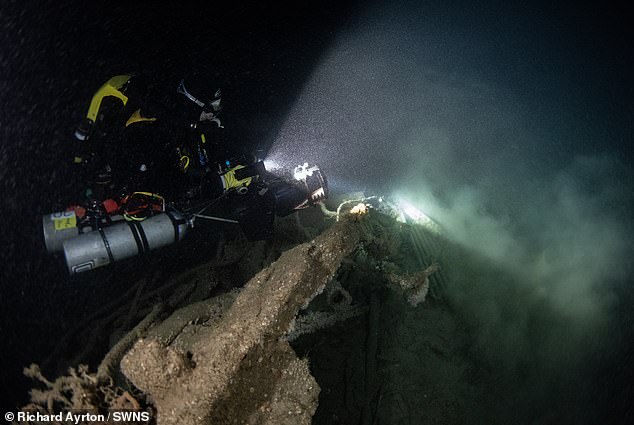 Jacob Jones said: ‘It was very clear that it was Jacob Jones immediately’ thanks to inscriptions

‘This was a steam ship which contained big boilers and very big engines to get it to travel at such a speed.

‘War ships look very different to cargo ships underwater – we could actually see the guns, torpedo tubes and one of the prop shafts that was bent 390 degrees – which would have happened either when the vessel exploded or when it hit the sea bed.’

Dominic added: ‘No human remains were found or personal artefacts.

‘But for me, the thing that brought it home was the bent prop shaft – which shows the trauma the vessel must have been through when it was torpedoed.

The vessel, which measured at 315 feet (96 metres) long and just over 30 feet (9.1 metres) wide, was armed with eight 21 inch torpedo tubes and four four-inch guns.

She was powered by a pair of steam turbines which were able to propel the vessel to a speed of up to 30 knots (34.5 miles per hour).

‘The Goonies’ home in Oregon sold to super-fan of the film after being listed...

The cosy UK pubs that have rooms for Christmas from £150 a night, from...

Is this REALLY the world’s best ski hotel? MailOnline’s verdict on the W Verbier