Cruising is no longer only about lying on sun loungers and watching the world go by — at least not for a growing number of more intrepid cruisers, who are opting for expedition ships as a luxurious base camp for adventures in far-flung regions of the planet.

Indeed, if you want to visit the most remote places on earth, from virgin icy landscapes to pristine coral reefs, there’s a new generation of environment-friendly ships ready for action.

Each is designed to get close to nature without ruffling its feathers (and not skimping on the champagne and caviar), so passengers can spend their days experiencing natural wonders and wildlife encounters from Antarctica to the Galapagos islands, the Arctic to Costa Rica’s rainforests. 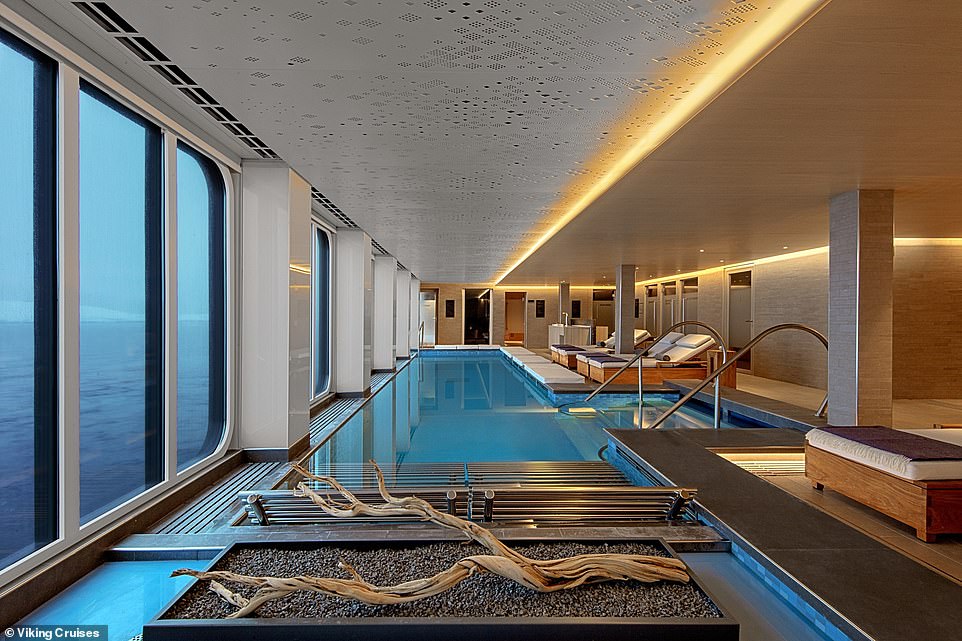 Above is the heated pool at the Viking Octantis’s Nordic spa. The ship offers learning opportunities as well as top-class dining and home-from-home Scandi-style lounges and bars 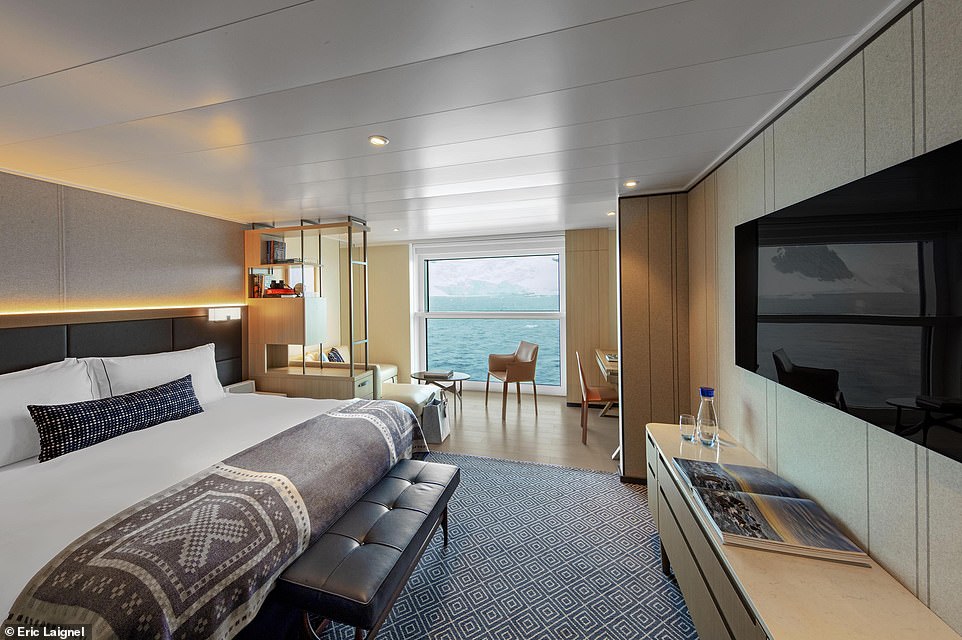 Cabins feel familiar to those on ocean ships, but with the exception of the ‘Nordic balconies’ — floor-to-ceiling windows that lower half way at the flick of a switch, Lesley reveals

Forget casinos, Broadway shows or kids’ clubs, guests on these Polar-class ships get their kicks from once-in-a-lifetime experiences visiting otherwise-inaccessible parts of the globe to see polar bears, penguins and whales up close during zodiac tours or diving to the bottom of the seabed in custom-built submarines.

Viking is the latest cruise line to get in on the act with its Polar-class vessel Viking Octantis, with adventure kit and learning opportunities that sit alongside top-class dining and home-from-home Scandi-style lounges and bars.

I am the first UK journalist on board, and our pimped-up Special Operations Boat (SOB) leaves speedboats for dead as we skim The Narrows between St Kitts and Nevis. James Bond comes to mind.

Strapped into this Norwegian military grade 12-seater boat after launching down an 85ft slipway straight from the back of ship, I am on a mission to learn about the geology and sea life around these Caribbean islands. 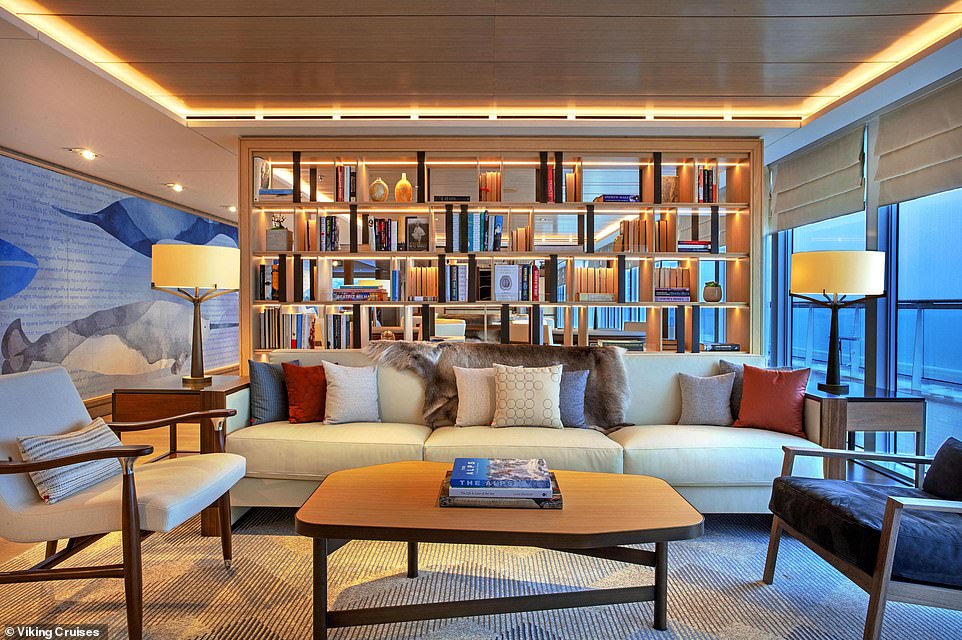 Scandi chic: The lounge on board Octantis. According to Lesley, Viking Octantis is much smaller than her sister ocean ships, but feels spacious and airy 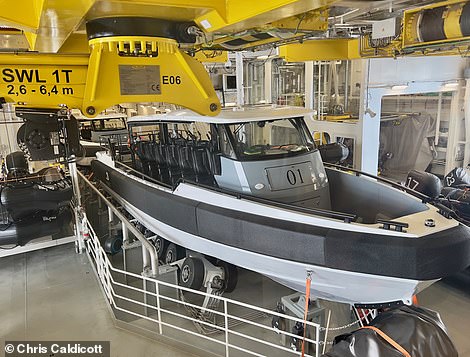 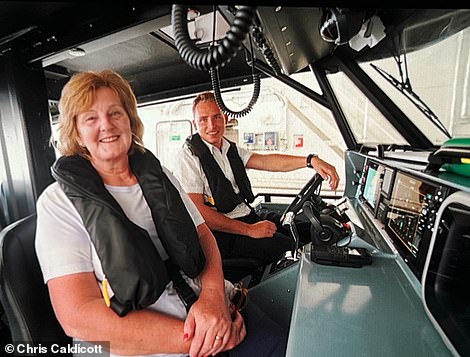 ‘Our pimped-up Special Operations Boat (pictured on the left) leaves speedboats for dead as we skim The Narrows between St Kitts and Nevis,’ writes Lesley. The picture on the right shows Lesley on board the Special Operations Boat as she sets off on a mission to learn about the geology and sea life around these Caribbean islands

The view from Timothy Hill in St Kitts. After learning about the sea life in the area, Lesley joins some of the 17-strong expedition team in the science lab on board to help count microplastics found in water samples

It’s been a busy day; it seemed nothing could better the morning at Carambola private beach club, kayaking and swimming alongside shoals of angel fish — but every day offers extraordinary experiences on this 387-guest ship, which will soon be heading for the Canadian lakes.

Passengers work hard and play hard; back on board I join some of the 17-strong expedition team in the science lab to help count microplastics found in water samples.

We learn from scientist Dr Brandi Revels that the planet’s sea water always leads to Antarctica, and through microscopes we study water collected there — but it’s shocking to find fibres in the water that will never biodegrade. 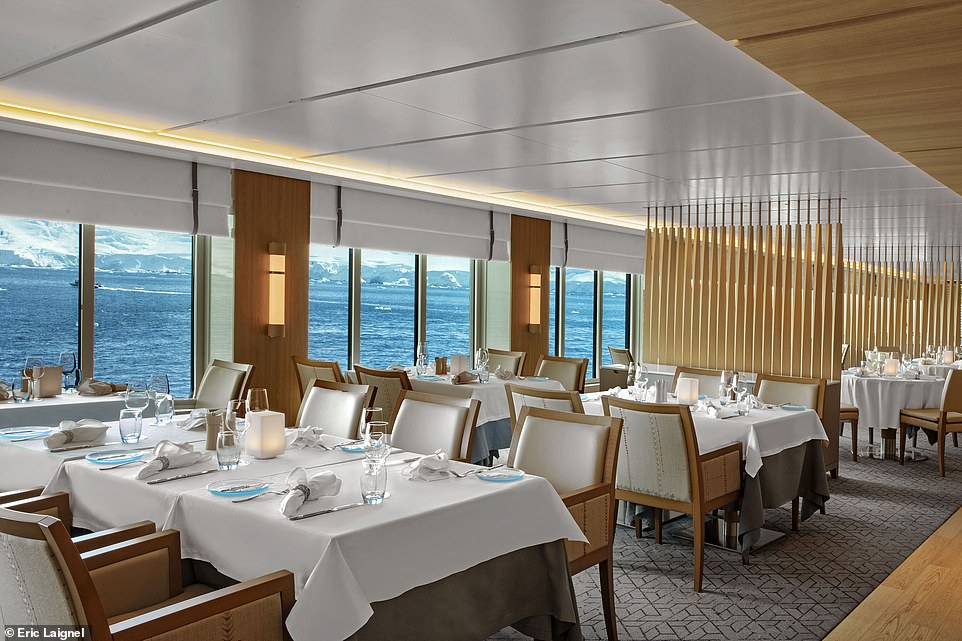 Above is the view from the ‘Restaurant’ eatery on board. Lesley observes: ‘Happiness also comes from relaxed but fine dining that has been transferred from Viking’s ocean ships’

Our findings are logged for the Norwegian Institute of Water Research (NIVA) while Viking is also a partner with Cambridge University, so it is satisfying to know that this form of tourism is supporting science. There’s also a weather balloon to assist the meteorological studies.

The learning continues through lectures and briefings in the beautiful auditorium with 270-degree sea views from floor-to-ceiling windows, all in the comfort of cream leather seats and Scandi woollen blankets.

When going ashore, tours are either all-action or focus on supporting local sustainable businesses. In St Lucia, we visit Rabot Estate, the island’s oldest cacao-growing farm, where the Hotel Chocolat Project demonstrates agri-tourism at its best. 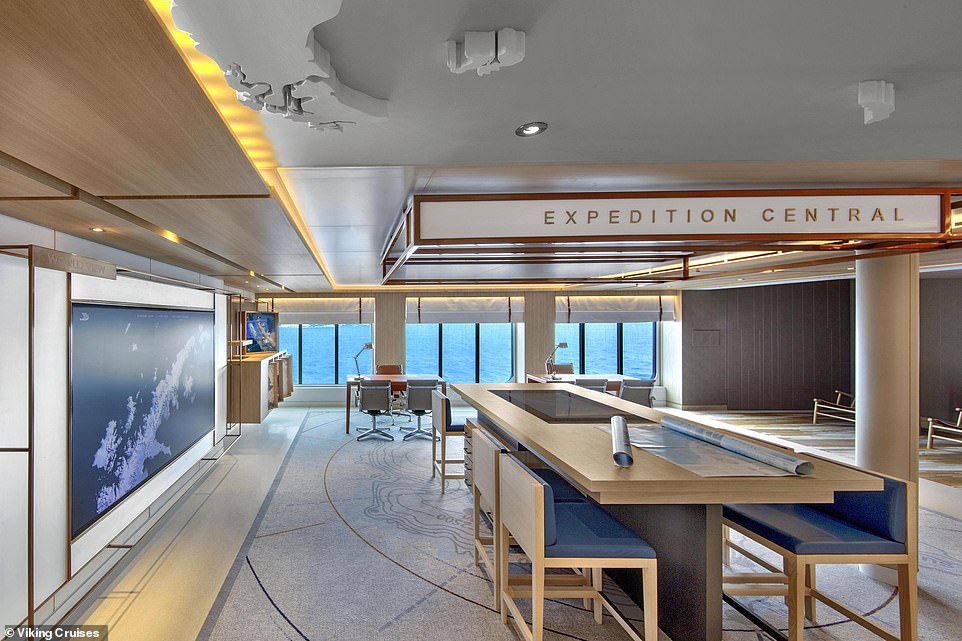 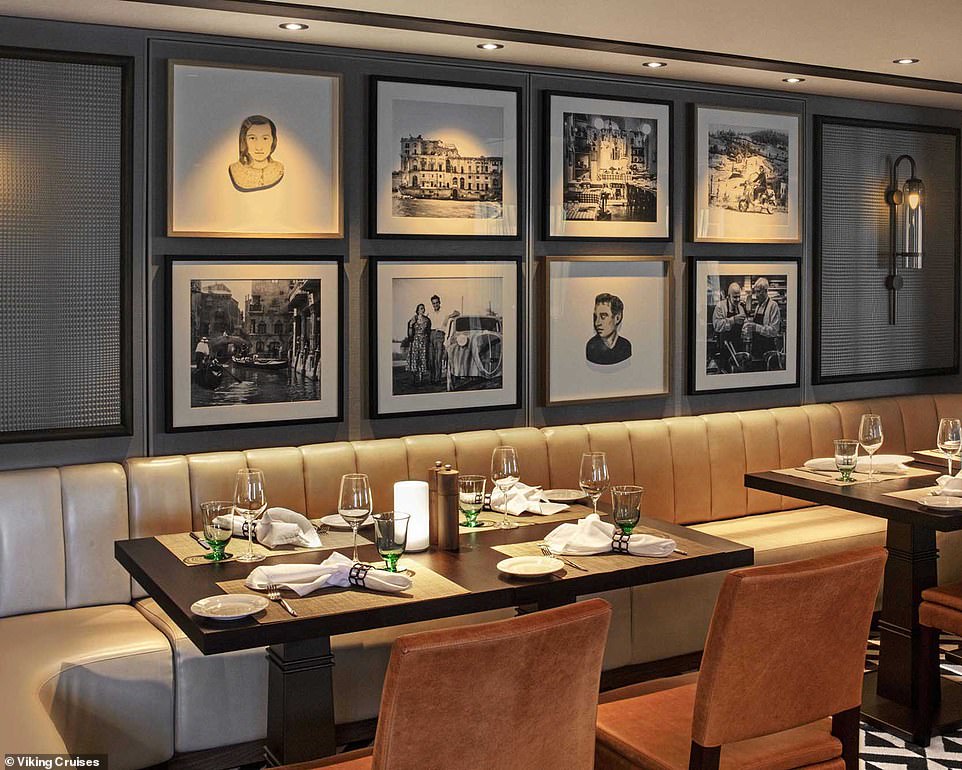 Here, Fairtrade chocolate production means staff get a cut of the profits, while we have fun making our own bar of chocolate overlooking the Unesco world heritage-listed rainforest.

Sailing into the glamorous island of St Barths is a stand-out moment when Viking Octantis, with her distinctive straight, long hull, slices through the turquoise water and turns the heads of the super-yacht set.

Small groups of passengers board the ship’s six-seater yellow submarine, ‘John’ — named after Beatle John Lennon, of course — to explore the seabed.

Scott Eddy, from Florida, says the experience was ‘mind-blowingly amazing’, but he actually saw less than I did on my day’s ticket to ride — swimming with turtles off Shell Beach before spotting rare white tropical birds. 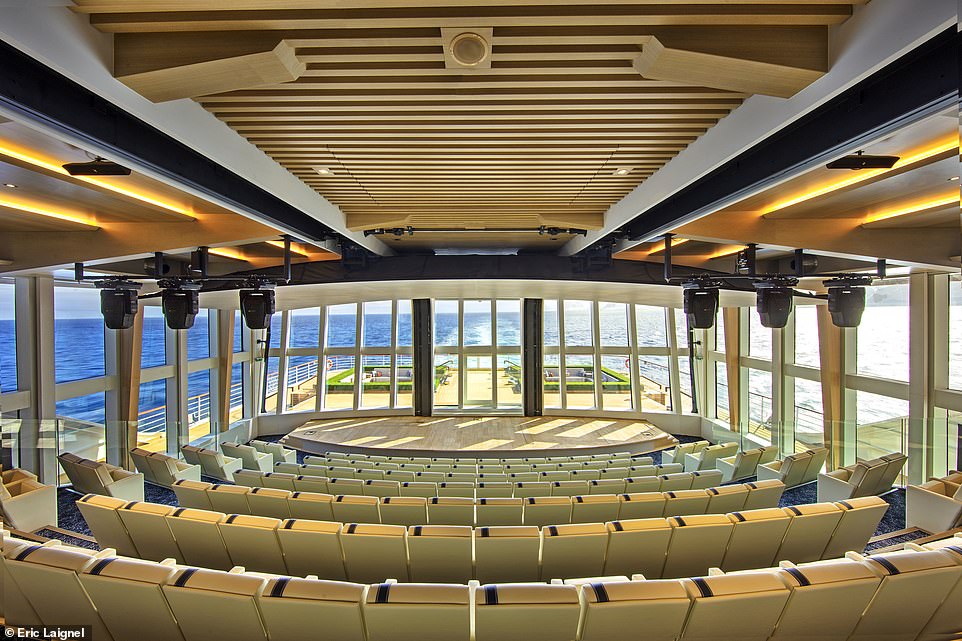 Guests can enjoy lectures and briefings in the beautiful auditorium, pictured, with 270-degree sea views from floor-to-ceiling windows 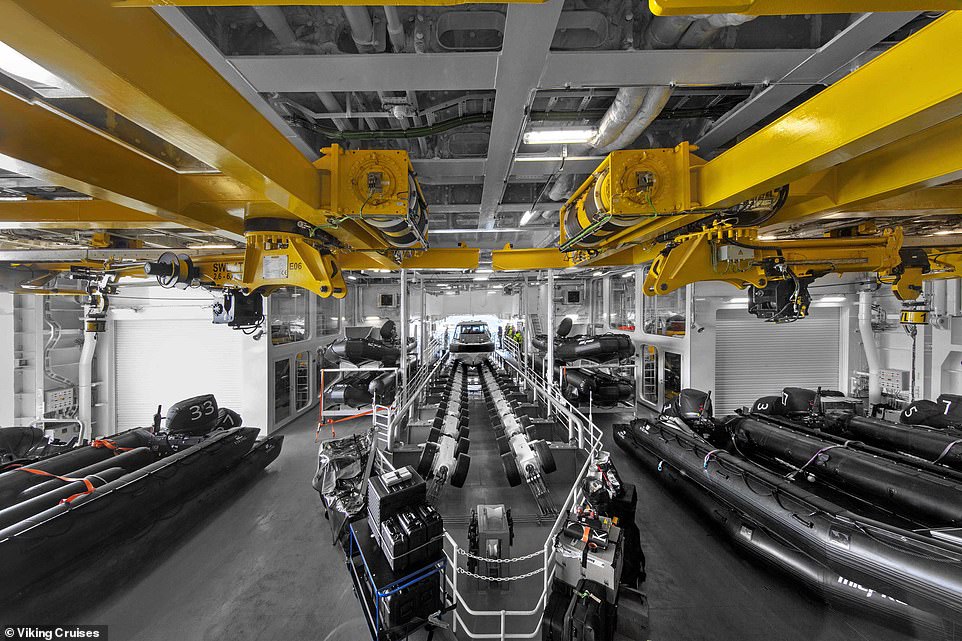 Viking Octantis’s hanger, which is home to the serious kit of ‘toys’ that includes John and Ringo, the six-seater submarines, the two £1million Special Operations Boats, 17 zodiacs and dozens of kayaks

‘Can a cruise line get any better than this?’ asks new-to-cruising passenger Wendy Goldsmith, from London, who is travelling with her mother, Norma, and is one of many guests who are on their first expedition cruise.

With only five decks, Viking Octantis is much smaller than her sister ocean ships, which accommodate around 900 people, but it feels spacious and airy. The ocean ships’ vast atrium space has been replaced by The Hanger, which is home to the serious kit of ‘toys’ that includes John and Ringo, the six-seater submarines, the two £1 million SOBs, 17 zodiacs and dozens of kayaks. The Hide is another new space, a funky lounge with an industrial edge and a club vibe where guests can have a drink, read or sit to listen to stories told by the expedition team as though they were home by the faux fireside.

Cabins feel familiar to those on ocean ships, but with the exception of Nordic balconies — floor-to-ceiling windows that lower half way at the flick of a switch. I leave my window open all day and night to listen to the waves. 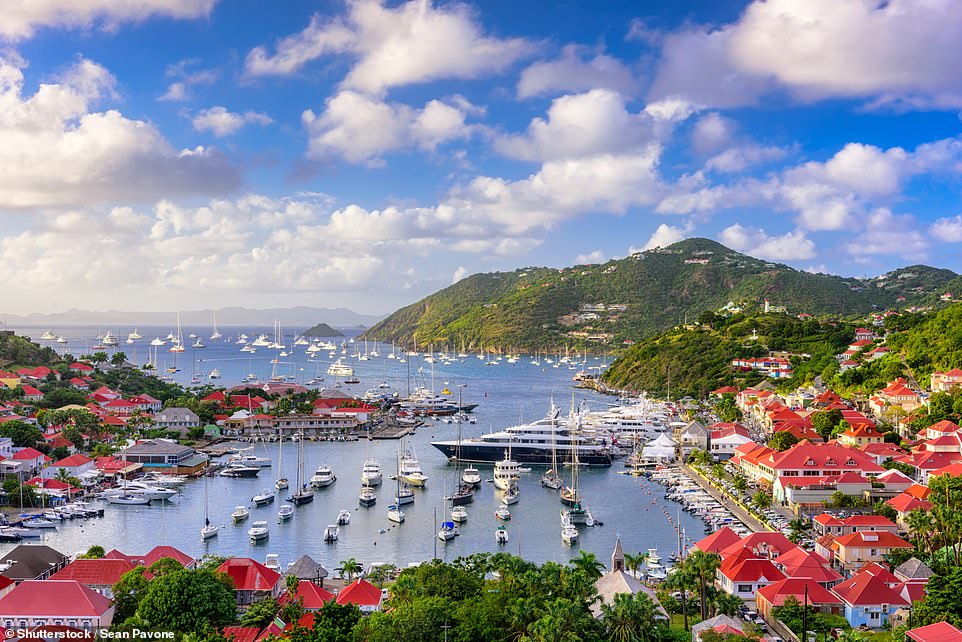 Lesley writes: ‘Sailing into the glamorous island of St Barths is a stand-out moment when Viking Octantis, with her distinctive straight, long hull, slices through the turquoise water and turns the heads of the super-yacht set.’ Above is Gustavia, St Barths’ capital 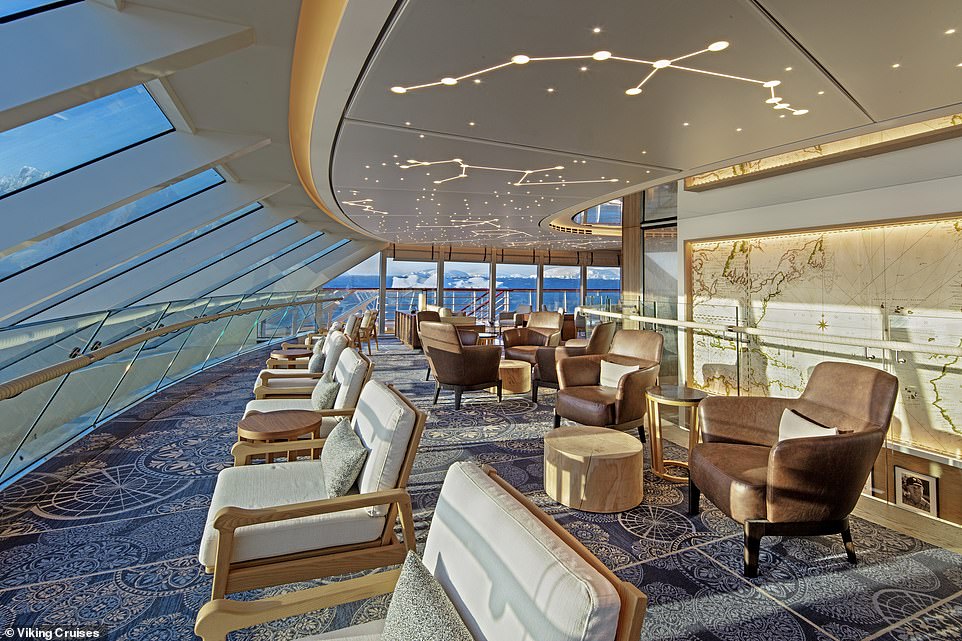 Above is the Explorer’s Lounge. Watching the sunset from the ship, Lesley says: ‘I’m starry eyed with my martini, toasting the future of cruising’

The ten-night Caribbean Connections voyage departs on October 13, 2022, sailing from Bridgetown, Barbados, to New York via San Juan, British Virgin Islands, St Barts, Montserrat and St Lucia. Prices start from £4,495 pp and include return flights, all meals – including wine, beer and soft drinks with lunch and dinner – use of Viking expedition gear, wifi and tips. (Viking.com, 0800 319 66 60).

The ship is at full capacity, but it is easy to find a quiet corner. And while the design and styling is sophisticated, there’s a warm atmosphere because the passengers are almost always breathlessly excited at what’s coming up.

Happiness also comes from relaxed but fine dining that has been transferred from Viking’s ocean ships.

In Manfredi’s, waiter-served choices range from Dover sole and lobster to scallops and steak; while the World Café is so much more than a buffet with a cook-to-order grill, sushi bar and everything in between from salads to a daily roast.

It is actually in the evenings that the ship comes into its own, and I slink off to the sunken gardens on the Finse Terrace, an outdoor lounge at the aft of the ship.

Just above sea level on Deck 2, I sink into one of the padded sofas surrounding a firepit with heated lava rocks and listen to the sound of water below.

The Caribbean’s golden sunset turns into a clear, dark sky. I’m starry eyed with my martini, toasting the future of cruising.

AND FIVE OTHER EXOTIC EXPEDITION CRUISES

Glories of the Galapagos 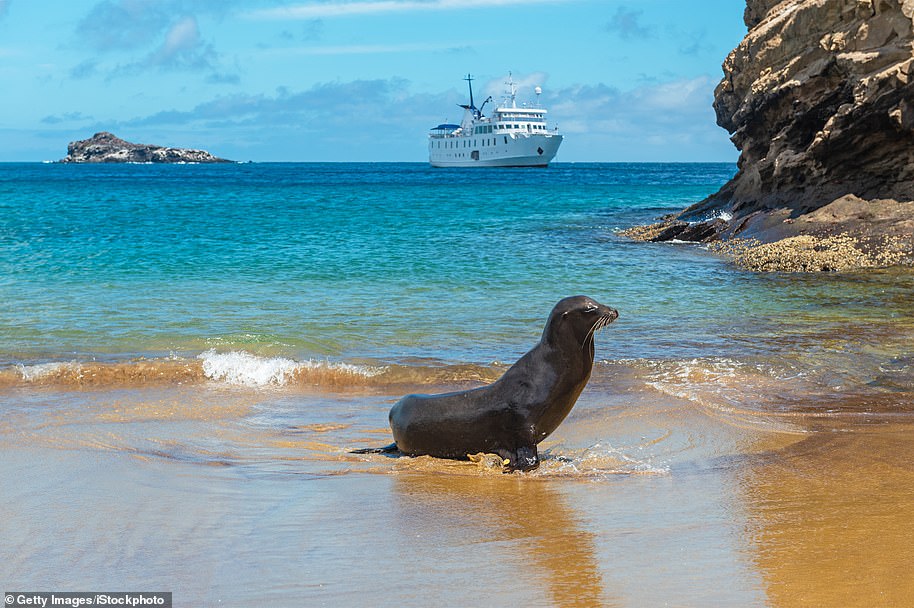 A sea lion in the Galapagos. Head on Silver Origin’s Galapagos Islands Adventure to explore the wildlife of the isles

The depths of Antarctica

Be the first to experience Scenic Eclipse’s new helicopter ice landings and heli-skiing on Antarctica’s virgin slopes, or if you prefer the water kayak around icebergs.

Spot sealife among coral atolls in Rowley Shoals Marine Park and Ashmore Reef from 120-guest Coral Adventurer which has some of the best snorkelling and diving in the world. See 233 species of coral and look for 688 species of fish including the giant potato cod and Maori wrasse. 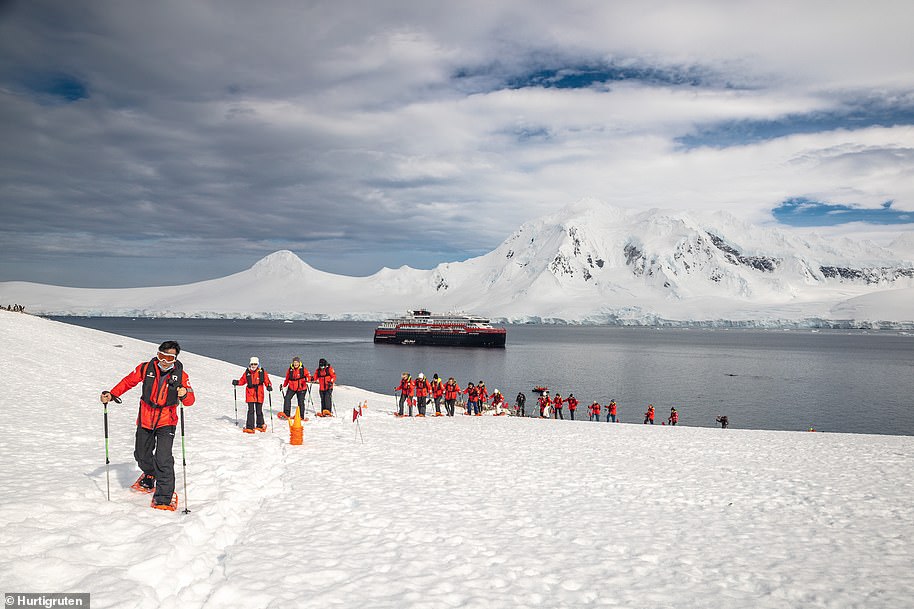 Intrepid: Cruisegoers enjoy snow-shoeing in Antarctica as part of a Hurtigruten itinerary