Shaun Johnson stepped up once again for the Warriors on Saturday afternoon, with the halfback executing an outrageous field goal to hand his side a golden point win over Canberra.

Nathan Brown’s side entered their Round 8 clash with the Raiders in need of a boost after being on the receiving end of a 70-10 hammering by Melbourne last time out, with huge questions asked of their defence.

Yet the Warriors rallied from a first half Raiders onslaught to take the game to golden point and from there, Johnson delivered.

Shaun Johnson was the hero once again for the Warriors, kicking a golden point winner

The 31-year-old, receiving the ball within striking range, sent Corey Horsburgh to the shops with an outrageous ankle breaking sidestep, before keeping his cool to slot home.

Bedlam ensued at Redcliffe, although Warriors star Reece Walsh was far from pleased with his side’s performance.

‘It’s good we got the win mate but I dont think we had a right to win that game tonight,’ Walsh told Fox Sports.

‘We were pretty poor mate and I feel like we’ve got to come back next week with a better attitude than we did tonight and show everyone how we can really play.

‘But I’m happy we got the win tonight.’ 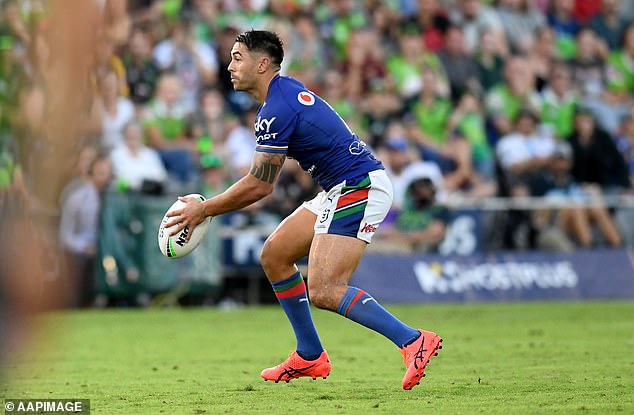 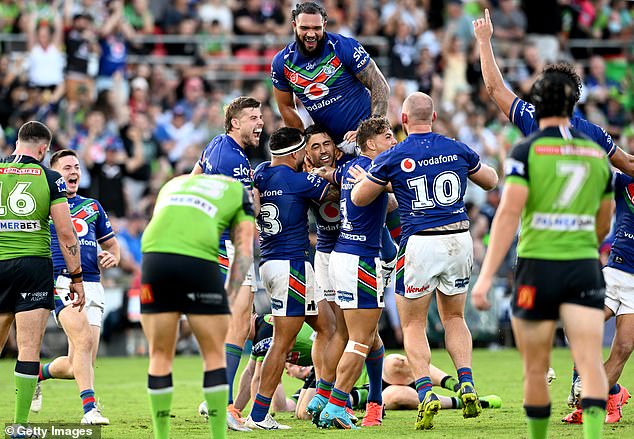 Raiders coach Ricky Stuart will be livid after watching his side give up eight-point leads on three occasions, the last time after interchange forward Corey Horsburgh was placed on report for a contentious high tackle on Matt Lodge in the 80th minute.

Lodge and Canberra prop Joseph Tapine were also reported in a niggly affair, while Raiders front-rower Josh Papalii may also come under scrutiny from the match review committee for an alleged eye gouge on Ben Murdoch-Masila.

Five days after accusing some of his charges of giving up in their record-breaking 70-10 drubbing at the hands of Melbourne, Warriors coach Nathan Brown certainly couldn’t question his side’s commitment this time around. 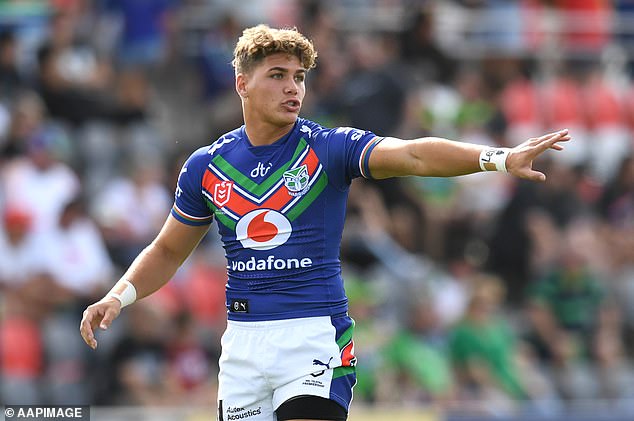 However, young star Reece Walsh said that he was disappointed in his side’s performance

Jordan Rapana gift-wrapped the Warriors an invitation back into the contest with a sloppy pass on his own quarter line that Nick Cotric coughed up.

Warriors winger Adam Pompey crossed on the ensuing play, only for the Warriors to concede a soft try to Hudson Young minutes later.

Another blunder from Rapana, this time a slip in defence, enabled teenage centre Viliama Vailea to bag his maiden NRL try off a probing chip kick from Warriors debutant Daejan Asi, to again cut Canberra’s lead to two points.

Jack Wighton earned the Raiders’ a more deserving 20-12 half-time lead when he did it all himself five minutes before the break.

A Euan Aitken try in the 63rd minute again reduced Canberra’s lead to two points before the dramatic finale.