Richarlison appeared to throw a lit flare back into the crowd after scoring for Everton against Chelsea on Sunday – and the incident could now come under investigation from the Football Association.

After a relatively uneventful first half at Goodison Park, the Brazilian forward pounced on a Cesar Azpilicueta mistake to slide the ball past Edouard Mendy to put the hosts in front.

His goal sparked jubilant scenes as Richarlison and his team-mates celebrated at the Gwladys Street End. 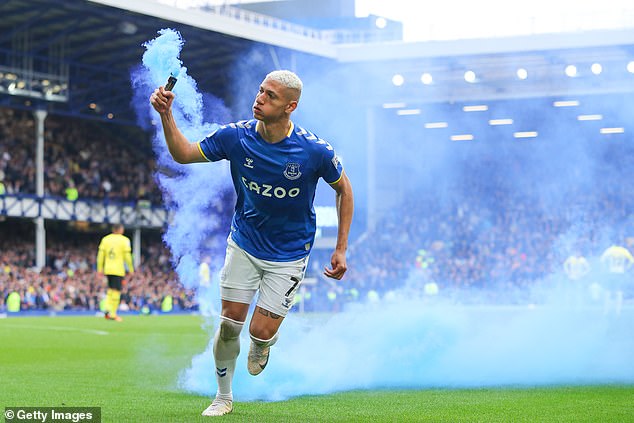 Amid the celebrations, a flare came onto the pitch, with Richarlison then going over to pick it up before hurling it back towards the fans.

His actions are set to come under scrutiny by the FA, however.

A club spokesperson also added that they will be investigating the matter. They said: ‘We will look into the matter but, as far we we are concerned, Richarlison was attempting to throw it out of the ground.’

Pyrotechnics are banned from football stadiums in England.

The 24-year-old’s goal was his ninth strike in all competitions this season – he has two goals more than Everton’s next highest scorer, Andros Townsend.

It could prove to be a crucial moment in Everton’s bid for survival, with the club currently in the bottom three heading into the final weeks of their campaign. 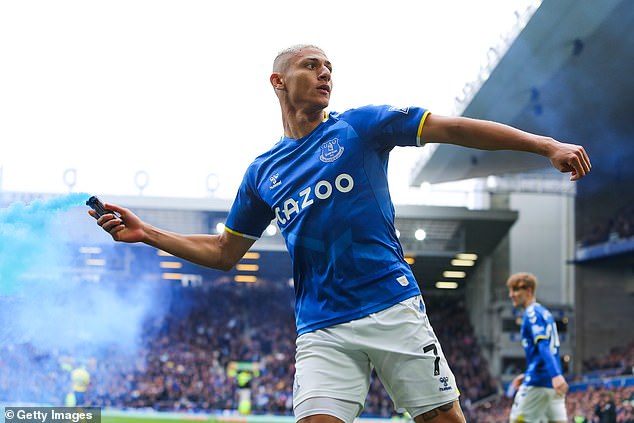 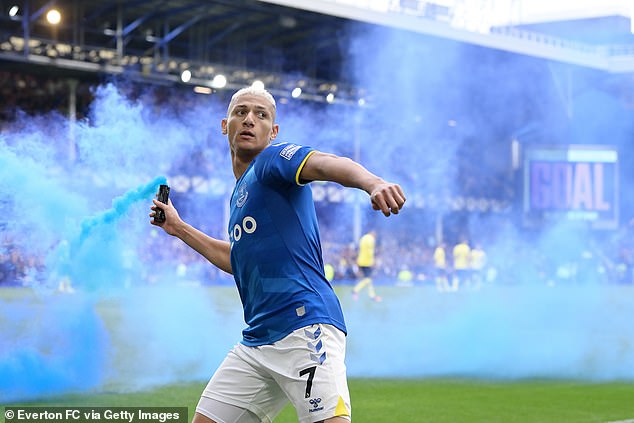 The flare was visibly lit and burning, raising concerns about the safety of supporters involved

However, the well-taken goal was somewhat overshadowed by his decision to throw a flare into a packed stand of fans.

His actions have been widely criticised on social media.

A second added: ‘You’d think even Richarlison would have some self awareness and shame. You’re in the relegation zone even if you win. How tf are you throwing the flare in such a triumphant manner?’ 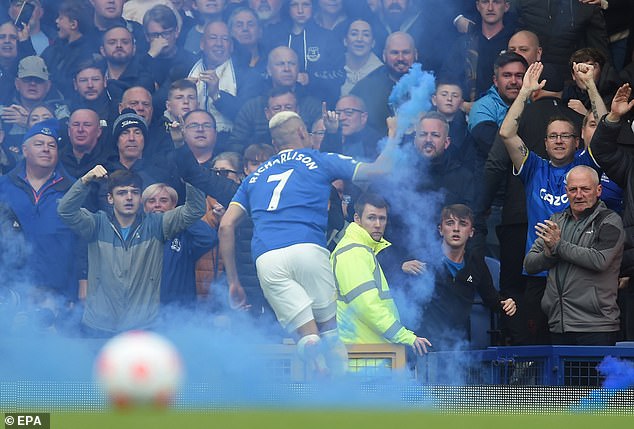 Social media users reacted to the incident with fury, and demanded harsh action against him

‘Can’t believe Richarlison just chucked a flare back into a stand made of wood with no punishment,’ a third wrote. ‘Meanwhile, Harvey Elliott picks one up off the pitch and celebrates and gets an FA investigation…’

‘Wait was Richarlison not shown a yellow card for throwing a flare into the crowd? Yet you get a booking for taking your shirt off or for celebrating with the fans?’ another asked.

‘Why has the FA not launched and concluded an investigation into Richarlison throwing a flare into the crowd,’ a fifth joked. ‘He should already be in jail imo.’

Meanwhile, a sixth said: ‘Richarlison has got to consider himself luck for not getting sent for an early shower after throwing a flare back into the crowd… not sure it was malicious, just stupid and dangerous.’

The flare was visibly lit and burning, so posed a substantial health hazard for the supporters packed into the stand.

In a similar incident in February, Liverpool starlet Harvey Elliott was contacted by the FA after holding a red flare at Wembley after his side won the Carabao Cup.

‘Harvey is a very young man on the pitch,’ boss Jurgen Klopp said on the incident. ‘And outside he is still a little bit more a boy.’