Conor McGregor has told Katie Taylor she is ‘making history’ in a passionate show of support as the unbeaten Irishwoman prepares to face Amanda Serrano in arguably the biggest female boxing match of all time.

Taylor faces seven-weight champion Serrano in the toughest fight of her career on Saturday, when the pound-for-pound number one will put her lightweight title on the line in New York against the Puerto Rican who has lost once in 44 fights.

MMA superstar McGregor, who knows exactly how it feels to fight for a belt at Madison Square Garden after winning the UFC lightweight title there against Eddie Alvarez in November 2016, voiced heartfelt backing for Taylor on Twitter.

The 33-year-old added a heart and the flag of the Republic of Ireland, pledging: ‘With you all the way, champ.’

2012 London Olympic Games champion Taylor holds the WBA, WBC, IBF, and WBO but has not encountered an opponent as feared as Serrano since becoming professional in 2016.

Known as ‘The Real Deal’, Serrano’s only defeat of a 30-knockout career was a decision loss to Frida Wallberg more than ten years ago. 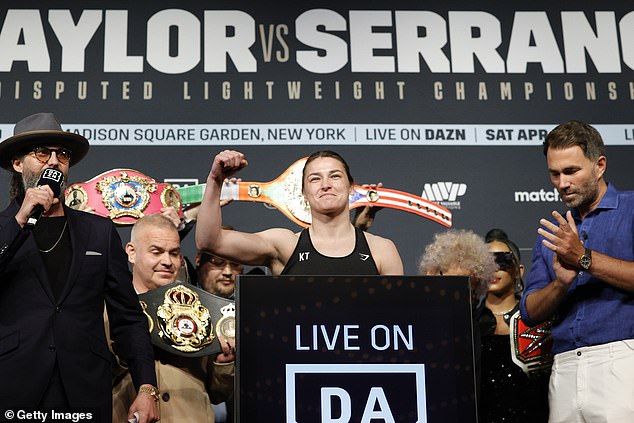 McGregor also headed to the US as an underdog in his sole boxing match to date, performing respectably in a knockout defeat to all-time great Floyd Mayweather in August 2017.

Taylor described McGregor, who is expected to make his UFC comeback in 2022 following a horrific leg injury sustained in his second defeat to Dustin Poirier in July 2021, as ‘The Muhammad Ali of the UFC’ in an interview in December.

The businessman and former featherweight king has posed with Taylor and produced a post gushing with admiration for her before she beat Delfine Persoon to win the UFC and The Ring belts at Madison Square Garden in June 2019.

McGregor wrote at the time: ‘Back this woman all the way. The first boxer male or female from the Emerald Isle to ever reach this coveted position. Ireland’s Katie Taylor – what a woman.’