Carlo Ancelotti had fans fawning over one of the ‘greatest photos they had ever seen’ as he posed with a cigar during Real Madrid’s open top bus celebrations on Sunday.

Madrid sealed the LaLiga title with a 4-0 win over Espanyol on Saturday, lifting the trophy at the Bernabeu after the game.

An the celebrations continued on Sunday with Ancelotti and his players being driven through the streets of Madrid.

Vinicius Jr then took to social media with a photo that threatened to break the footballing internet.

Ancelotti, who has often been likened to some sort of Italian mob boss, was seen smoking a cigar with Vinicius, Eder Militao, David Alaba and Rodrygo all smiling in the background.

Madrid’s LaLiga triumph capped a remarkable milestone for Ancelotti on Saturday as the Italian became the first manager to capture titles in each of Europe’s top five leagues England, Spain, Germany, Italy and France.

The 62-year-old Ancelotti has one of the most-decorated CVs in world football and when he was lured back to Madrid for a second spell last June following the departure of club great Zinedine Zidane, he knew that his only mission was to increase Real’s trophy haul.

To do that Ancelotti has not only shown astute tactical nous on the pitch but he also knows how to bring out the best in his players, both the young and experienced. 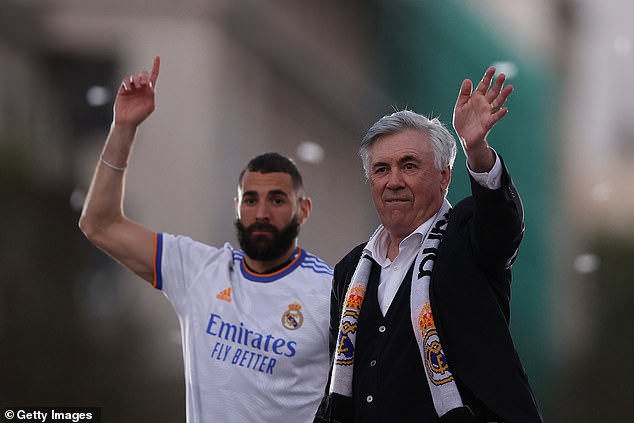 Ancelotti and Karim Benzema celebrate after winning yet another trophy together

Many thought 36-year-old Croatian midfielder Luka Modric and French striker Karim Benzema, 34, were well past their prime but under Ancelotti’s calm guidance, they have once again prospered.

Benzema is the league’s top scorer this season with 26 goals — his tally already more than his 2020-2021 haul.

At the other end of the spectrum, Ancelotti has also boosted the confidence of 21-year-old Vinicius Jr, who has become an integral part of a squad not only as a winger but also with his ability to score goals. Only Benzema has netted more goals than the Brazilian for Real in LaLiga this season.

Ancelotti’s meticulous planning and nurturing of players paid off on Saturday when he completed his collection of titles from the top five leagues.

His winning run began with steering AC Milan to the Serie A title in 2004, before triumphs in the Premier League with Chelsea in 2010, Ligue 1 with Paris St Germain in 2013 and Bundesliga with Bayern Munich in 2017 followed.

While winning LaLiga would be considered as a huge achievement for many clubs and managers, for Ancelotti it only signals a job half done.

Having already won the Champions League with Real in 2014, helping the Spaniards to their fabled âDecimaâ (10th) European crown before being sacked 12 months later, he now also stands on the cusp becoming the most successful manager in the tournament’s history.

Along with Bob Paisley and Zidane, Ancelotti has won the European Cup or Champions League on three occasions as a manager, having also led AC Milan to glory in 2003 and 2007.

With Real battling it out against Manchester City in the semi-finals of this year’s tournament, the Italian will be determined to take sole ownership of that record.

To do that, however, he will first need Real to overturn a 4-3 first-leg deficit against City on Wednesday as the Spaniards chase a 17th appearance in the final of Europe’s premier club competition.

It would be a remarkable achievement for a coach who arrived at Real under much scrutiny after three uninspiring seasons while in charge of Napoli in Serie A and Everton in the Premier League.

In fact, if Real president Florentino Perez had had his way, Ancelotti would not have even been at the club. However, after Perez was frustrated in his attempts to sign Massimiliano Allegri, Mauricio Pochettino and Antonio Conte, he had to settle for his fourth-choice pick.

If Ancelotti pulls off the LaLiga-Champions League double this season, club faithfuls will be thanking their lucky stars that their top-three picks were unavailable