Boxer Shakur Stevenson won two new titles in an impressive win over Oscar Valdez in Las Vegas on Saturday – then left the belts and raced off stage before a chaotic mass brawl when he reportedly feared for his mother’s safety.

Footage of Stevenson’s post-fight press conference following the toughest bout of his career so far shows the Olympic medalist suddenly looking worried by unrest to his left, then putting his titles down and speeding towards a huge commotion in another room.

Although it is not clear how involved Stevenson was in the shocking skirmish, reports said the fighter and his family were shut inside a room while security personnel calmed the situation and the scene cleared.

Stevenson had to ask someone to bring his belts and shouted at the crowd to calm down before the cheery press conference began, according to Yahoo.

The outlet said that security had not let Stevenson’s mother into the room before he became embroiled in the casino hall ruckus in an attempt to protect family members who were involved.

Manager James Prince, who previously managed hall-of-famers Floyd Mayweather and Andre Ward, is said to have confirmed by text that Stevenson and his mother were ‘fine’.

A spokesman for the famous MGM Grand venue, where around 17,000 people are said to have watched Stevenson’s unanimous decision victory, told Yahoo that no comment would be made until they had finished trying to gather more information on the incident. 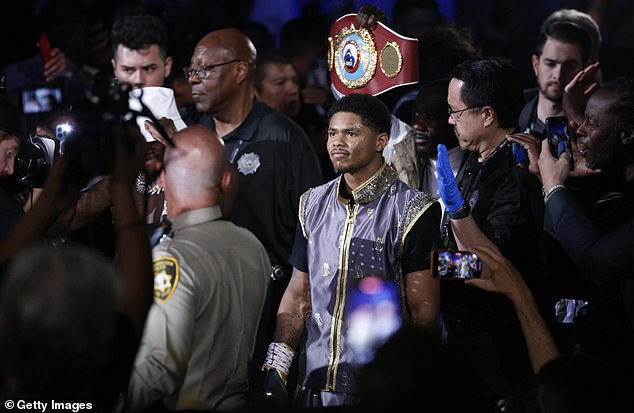 Stevenson was at the MGM Grand, where Floyd Mayweather beat the likes of Manny Pacquiao

Stevenson had an eventful night even before his media duties began, retaining his WBO titles and winning the previously unbeaten Valdez’s WBC belt, as well as the vacant The Ring strap.

The 24-year-old’s rapper girlfriend, Young Lyric, then accepted his marriage proposal in the ring following the 18th victory of his career.

Devin Haney, the WBC lightweight champion who also has a flawless record and watched from ringside, could be one of Stevenson’s next targets if he moves up in weight.

Stevenson said: ‘I’m a superstar in this sport – line them up and name them, I’m ready for whoever. I might go collect all the belts at [super featherweight] and become undisputed.

‘Devin is definitely a huge fight for me, he’s a hell of a fighter. I have got nothing but respect and love for Devin – but we can line it up in the future, too.’

Prince added: ‘The sky is the limit. Everybody who gets in front of him is going to have a problem.’ 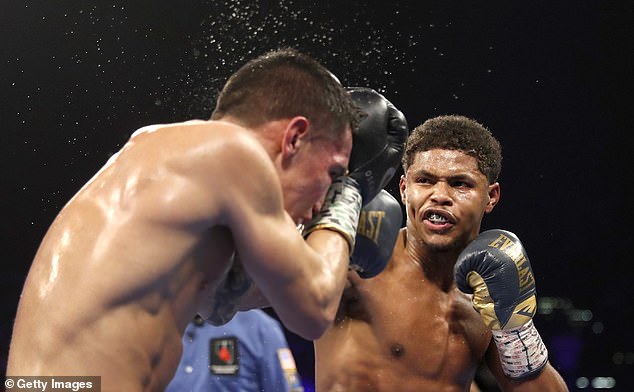