Borthwick urges Leicester to embrace their underdog status against Leinster

Leicester are the biggest club in England and leaders of the Premiership, but Steve Borthwick wants his Tigers to embrace underdog status against well-rested, well-financed Leinster.

The Irish province are an established European superpower aiming to take another step towards a fifth title when they visit the East Midlands for Saturday’s momentous Heineken Champions Cup quarter-final.

Borthwick has overseen an epic revival at Leicester, but knows this will be a daunting task, against a team able to channel superior resources into the quest for more continental glory.

It will not be a level playing field for the Tigers, against the Dubliners laden with Ireland’s finest, fresh talent. Their head coach said: ‘Look at the size of their (Leinster’s) squad, the number of internationals and the nature of their league, it is very different.

‘Compare that to where we are – the Premiership is a fierce competition and we operate under a salary cap, with a limited squad size. Sending one squad to South Africa and leaving one in Ireland (as Leinster were able to do recently in the United Rugby Championship) is a different situation. It is one of the challenges we need to overcome. I’m not complaining about it, it’s just a fact.

‘These guys have been at the top of European rugby for a long time and had a lot of success. They’ve got 30-odd internationals in their squad – the vast majority of the Ireland team that finished second in the Six Nations. It is quite an incredible team they have.’

Borthwick insisted Leicester would take heart from their against-the-odds victories so far in this European campaign, adding: ‘We went out as massive underdogs in Bordeaux and managed to do something special there. 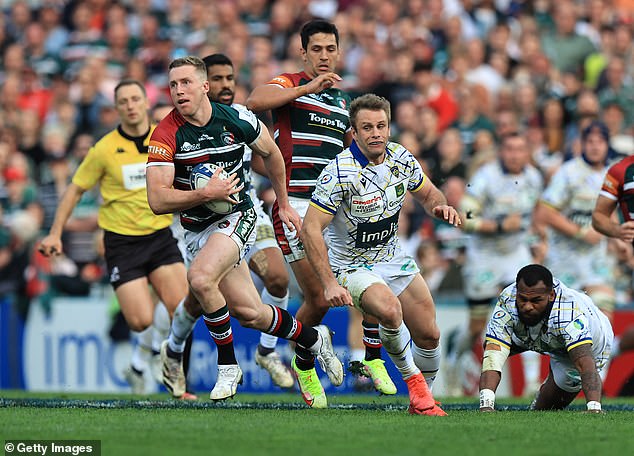 ‘We went out to Clermont as underdogs – we’d not won down there for a long team and were playing against a great team, but we managed to do something special.’

England scrum-half Ben Youngs is relishing the chance to gauge just how far Leicester have advanced since Borthwick took charge.

‘We get to see where we’re at against the best team in Europe, if not the best club team in the world,’ he said. ‘It’s everything we want. We’ve come on loads this season but let’s see how far we have come. Saturday is an opportunity to do that.’