Arsenal 3-0 Tottenham: Hosts ensure WSL title will be decided on the final day after derby win

The Women’s Super League title race will go down to the final day after Arsenal beat Tottenham 3-0 to go one point behind leaders Chelsea.

Spurs never really looked like spoiling their North London rivals’ party. Arsenal could have had more than their three goals with a combination of goalkeeper Tinja Korpela and poor finishing keeping the score down.

There was no goal for Vivianne Miedema in what could have been her last home game in red and white. 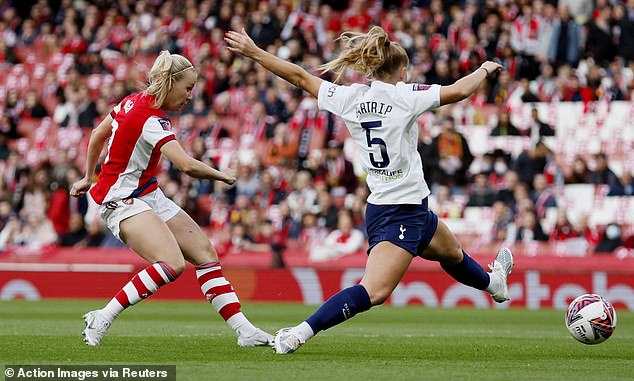 A temporary statue of the striker was on display outside the Emirates before kick-off but it remains uncertain whether the Gunners’ star player will be here come the start of next season.

The 25-year-old is out of contract in the summer and has been heavily linked with a move away, with both Barcelona and Lyon tipped as possible destinations. If this was her last home game, she will be disappointed she did not manage to get on the scoresheet.

Miedema is just four goals behind leading scorer Sam Kerr and could have had four or five here, but the golden boot is now almost certainly heading Kerr’s way.

But the task for Arsenal was simple – win to keep their trophy hopes alive, which they did comfortably. 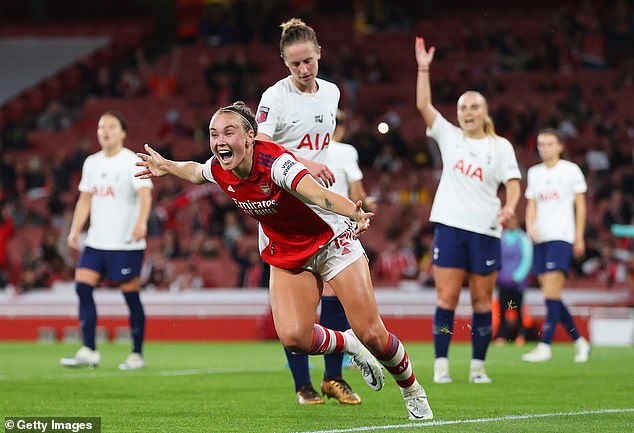 ‘We want to play games that matter the most and if you don’t bring it to that point, you can never win any trophies,’ said Arsenal boss Jonas Eidevall. ‘So that’s always the starting point, play the deciding games, get to those moments, and believe that everything is possible.

‘Happy with the strong performance for us, I think we played the way we wanted to express ourselves. We played very good in possession we really played a strong defensive side like Tottenham apart at times and I thought that was joyful to watch.

‘When we played them the other time, I think they had 22 fouls. It’s exceptional. Of course, we never see teams going over ten fouls in the WSL. I think, of course, there were over ten fouls today as well. So yeah, we knew that, it’s their way of trying to get into our heads. So that’s what you need to manage. 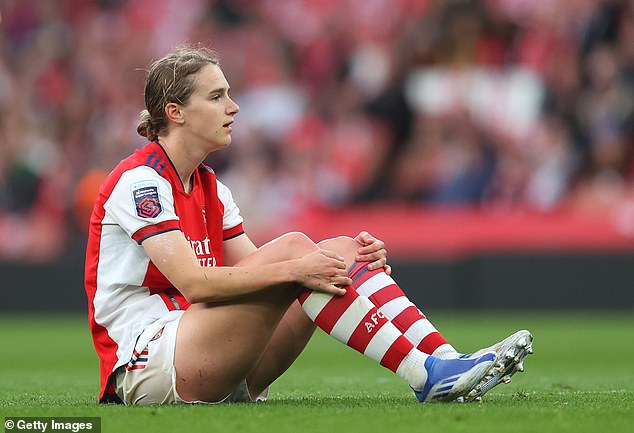 It took Arsenal just four minutes to open the scoring. Leah Williamson’s pass broke through the Tottenham midfield and found Mead, who was allowed to run and run before reaching the box and firing a left-footed shot into the bottom right corner.

Spurs should have been level minutes later when the ball dropped to Kyah Simon a yard out at the near post but Miedema did brilliantly to block on the goal-line before repelling Simon’s follow-up effort.

After her heroics in her own penalty area, Miedema could have had a hat-trick of goals at the other end. The forward fired wide twice from close range before a third effort was saved by Spurs goalkeeper Tinja Korpela at the near post.

The Gunners could have been out of sight by half-time as Caitlin Foord was next to go close from long-range. 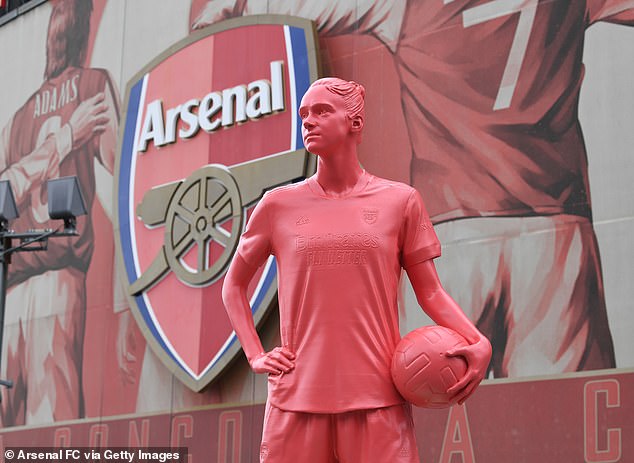 Miedema still couldn’t find a way through as Korpela made another save at the start of the second half. The forward then fired just over from the edge of the box as the Gunners looked to close off the game.

A second goal finally came in the 71st minute as Miedema fired a cross into the box which Foord tapped home at the back-post.

Josie Green was lucky to stay on the pitch when she caught Lia Walti with her studs up shortly after Arsenal’s second, but the midfielder escaped with just a yellow card.

Green’s tackle summed up Spurs’ evening as frustration took hold and it got worse for them when Foord curled in a third from the edge of the box. Foord is another player out of contract at the end of the season. Tonight she showed why Arsenal should be looking to extend her deal beyond the summer. 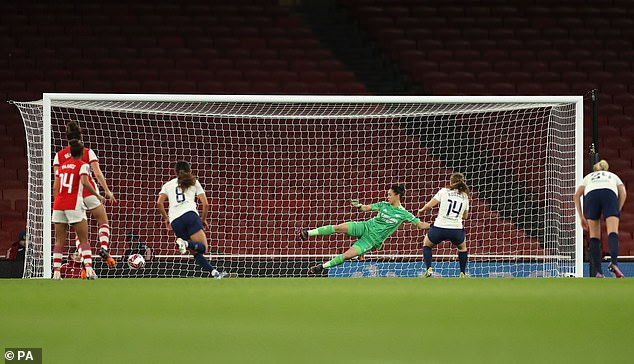 ‘I really want Caitlin to stay and I think she has been excellent for us, especially since coming back from the Asia Cup,’ Eidevall added. ‘All the games, basically been playing both in possession and out of possession and she’s been a huge part of the success that we have had this Spring.’

There was still time for Korpela to deny Miedema once again, as she got down to save a fierce effort that was heading into the bottom right corner.

Spurs then squandered a chance for a late consolation as Angela Addison saw her penalty saved by Manuela Zinsberger after the forward had been brought down by Lotte Wubben-Moy.