The Metaverse has been touted as a place where people will be able to live out their fantasies – whether that’s fighting their enemies on a battlefield or going on a date with the woman of their dreams.

But for these experiences to be truly immersive, it’s not just about what you can see and hear in the metaverse, but also what you can feel.

Now scientists in Pennsylvania have revealed a steamy new technology that makes it possible to ‘kiss’ someone in the metaverse by sending life-like sensations to your lips, teeth and tongue.

The scientists have modified a virtual reality (VR) headset by fitting it with haptic technology, meaning it simulates touch by applying forces, vibrations and motions.

It uses a thin array of transducers integrated into the underside of the VR headset that direct ultrasound energy at different parts of the mouth.

As well as kissing sensations, the tech could be used to drink from a virtual water fountain or take a puff from a cigarette. 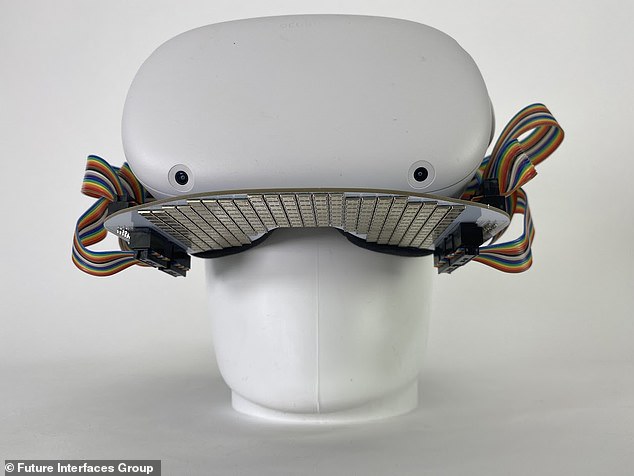 Importantly, the headset doesn’t require any equipment to be put up against or into a user’s mouth

WHAT IS HAPTIC FEEDBACK?

Haptic feedback applies vibrations to the gamer to match a virtual experience, such as a game.

Haptic feedback is similar to vibrations from mobile phones or game controllers, that lets the user feel that something is working.

When directed at additional points of a user’s body, other than just the hands, it can make a virtual experience more immersive.

The prototype headset, which is an adapted Oculus Quest 2, has been developed by researchers at Carnegie Mellon University’s Future Interfaces Group in Pittsburgh, Pennsylvania.

Importantly, the modified headset doesn’t require any equipment to be put up against or into a user’s mouth; instead, the components are rested above the nose.

According to the team, the mouth has been largely overlooked as a haptic target in VR and augmented reality (AR), despite being second in terms of sensitivity behind the fingertips.

Usually, haptic feedback applies vibrations to a person’s hands via controllers, often in video games to match the gameplay (such as feeling a vibration in FIFA when a football strikes the post).

‘Proximity of the mouth to the headset offers a significant opportunity to enable on- and in-mouth haptic effects, without needing to run wires or wear an extra accessory,’ the researchers say.

‘We developed a thin, compact, beamforming array of ultrasonic transducers, which can render haptic effects onto the mouth. 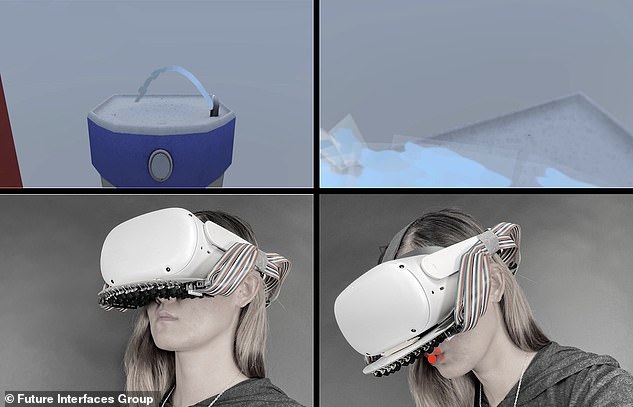 Here, a user of the prototype headset ‘drinks’ from a virtual water fountain, and feels the splash of the water against her lips

An early tester of Meta’s Horizon Worlds app has said her avatar was virtually groped by a stranger within the metaverse.

The incident, acknowledged by Meta (the company formerly known as Facebook), took place during Horizon Worlds’ beta testing and was reported November 26, 2021.

Horizon Worlds, finally released by Meta on December 9, allows users in the US and Canada to gather with others, play games and build their own virtual worlds.

‘Importantly, all components are integrated into the headset, meaning the user does not need to wear an additional accessory, or place any external infrastructure in their room.’

The Future Interfaces Group has published a research paper detailing its creation, as well as a video showing the potential applications of haptic feedback to the mouth in various virtual scenarios.

For example, when playing a horror game in the metaverse, or just in VR generally, it could be used to stimulate the feel of a spider web brushing across the lips or feel pools of slime running into the mouth.

Other examples include bushing teeth, smoking cigarettes, feeling rain and wind, and drinking from cups of coffee or a water fountain.

Haptic technology that focuses on stimulating a variety of senses, other than simply just what we see, is seen as crucial to making the metaverse as life-like as possible by companies such as Meta (formerly known as Facebook).

The term ‘metaverse’, coined in the 1992 dystopian novel ‘Snow Crash’, is used to describe immersive, shared spaces accessed across different platforms where the physical and digital converge.

Mark Zuckerberg, who co-founded Facebook in his dormitory room at Harvard University in 2004, has described the metaverse as an ’embodied internet’.

Within years, Facebook users will be able to use the platform not on their phone or computer, but by donning a VR headset. 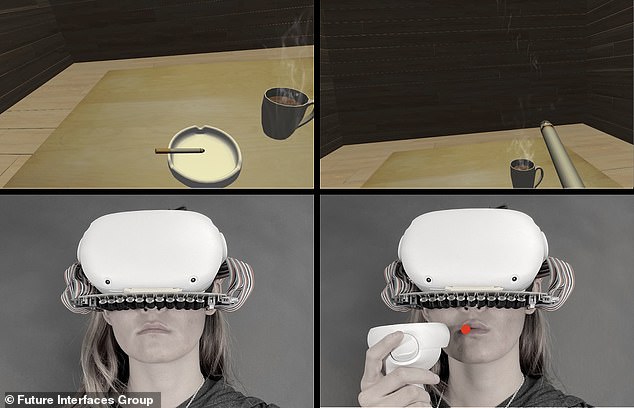 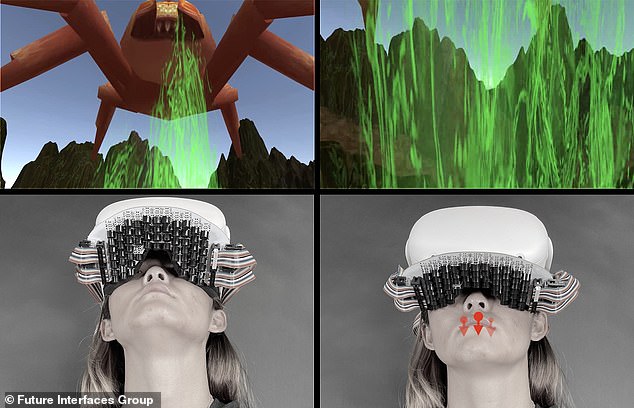 Here, the user feels slime from a giant spider falling down her face in a game-like virtual setting

Rather than swiping the screen of a device, they could potentially meet up with a Facebook friend in a virtual shared space – like an ultra-realistic simulation of another planet or an idyllic garden – and vocally chat to each other’s avatars.

‘It’ll be characterised by social presence, the feeling that you’re right there with another person, no matter where in the world you happen to be,’ Meta says.

‘The metaverse is still a ways off, but parts of it are already here and even more are on the horizon.’

Meta renamed itself in October, as part of its long-term project to turn its social media platform into a metaverse.

THE FACEBOOK ‘METAVERSE’: A VIRTUAL WORLD WITHIN A WORLD

In a recent interview, Mark Zuckerberg said that over the next five years, he wants people to think of Facebook not as a social media company, but a ‘metaverse’ company.

That is one that is akin to a virtual environment where people can work and play for most of their 24 hours without leaving their home.

‘And my hope, if we do this well, I think over the next five years or so, in this next chapter of our company, I think we will effectively transition from people seeing us as primarily being a social media company to being a metaverse company,’ Zuckerberg said in the interview with The Verge.

‘And obviously, all of the work that we’re doing across the apps that people use today contribute directly to this vision in terms of building community and creators.

‘But this is something that I’m spending a lot of time on, thinking a lot about, we’re working on a ton. And I think it’s just a big part of the next chapter for the work that we’re going to do in the whole industry.’

So what exactly is the metaverse?

As Zuckerberg describes it, it’s a ‘vision’ that spans the entire tech industry, calling it the successor to the mobile internet.

‘But you can think about the metaverse as an embodied internet, where instead of just viewing content — you are in it,’ he continued.

‘And you feel present with other people as if you were in other places, having different experiences that you couldn’t necessarily do on a 2D app or webpage, like dancing, for example, or different types of fitness.’

The Facebook CEO says his vision – which he has been working on for several months – would not only reach into virtual reality, but augmented reality, computers, mobile devices and game consoles as well.