Copyright 2021 - All Right Reserved
Home » Third of Gen Z now prefer VOICE NOTES to texts:as they are the fastest way to communicate
Science

Third of Gen Z now prefer VOICE NOTES to texts:as they are the fastest way to communicate

Third of Gen Z now prefer VOICE NOTES to texts: 18 to 24-year-olds claim they’re the fastest way to communicate – and people in BIRMINGHAM are most likely to use them

When you have a good story to tell, sometimes it just doesn’t have the same effect when you type it out.

This may be one of the reasons people are increasingly choosing to record themselves relaying their tale, and sharing it as a voice note.

According to new research, this communication method is most popular with Generation Z, with a third of 18 to 24-year-olds sending them to friends and family.

This is up 10 per cent from three years ago, representing the biggest increase in uptake of all forms of smartphone messaging.

Voice note popularity has increased most in Birmingham, with 24 per cent of Brummies now claiming to regularly record voice messages.

However, the trend has not taken off among Baby Boomers, as there has only been a 3 per cent increase in voice note usage with 58 to 76-year-olds over the past three years.

According to new research, voice notes are most popular with Generation Z, with a third of 18 to 24 year olds sending them to friends and family (stock image)

TOP CITIES WHERE VOICE NOTES HAVE GROWN MOST IN POPULARITY

Online smartphone retailer, Mobiles.co.uk, surveyed 1,000 Brits to find out how they like to communicate using their phones, and found voice notes to be a growing trend in recent years.

Meanwhile, WhatsApp has optimised its voice reply capabilities by allowing users to pause their note mid-way through if they lose their train of thought, and preview it before it is sent.

Each generation has increased their use of voice notes over the past three years, but they are used decreasingly often by each older age group.

While Generation Z claims to use them 33 per cent of the time, the same goes for only 5 per cent of Boomers.

When asked why they are choosing to record their messages, over half of participants said it is easier than other communication forms.

Generation Z also said that they like how quickly a voice note can get their message across, with 6 per cent saying they would use them in an emergency.

They are also 10 per cent more popular with males of the youngest generation than females, going against the common stereotype that women talk more than men.

While the short, recorded messages are increasing in popularity in all demographics, residents of certain cities have taken to them more than others.

Almost a quarter of people in Birmingham now use them frequently, as well as 21 per cent of Londoners and 19 per cent of those from Leeds.

People in Leeds are also hopping on the trend, with users of voice notes having increased by 8 per cent over the past three years, according to the survey. 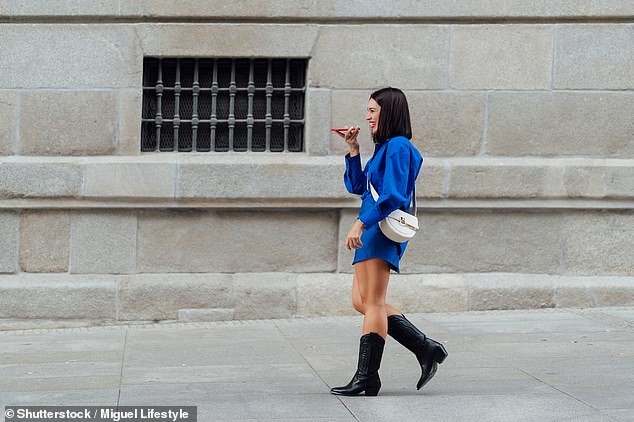 Generation Z also said that they also like how quickly a voice note can get their message across, with 6 per cent saying they would use them in an emergency  (stock image)

When it comes to who you are sending a voice message to, there is another generational difference.

The study revealed that 65 per cent of Generation Z and Millennials are most likely to send voice notes to their friends.

However, the Boomers tend to reserve them for their spouse or partner, with half of those surveyed claiming they are the most likely recipient.

Again, it is men who prefer to communicate with their significant other with voice notes, as only 36 per cent of women do this next to 62 per cent of men.

Men who speak in a lower pitch are worse at communicating with their loved ones, and so can be more likely to avoid forming close attachments, a study discovered.

Scientists recruited 218 undergraduate students, assessed their attachment style through a questionnaire, and had them record sentences to assess their vocal pitch.

Those with a ‘more masculine’ voice found it harder to develop strong attachments in a relationship, say experts from Sichuan Normal University in Chengdu, China.

They also used less positive communication patterns in their relationships compared to those that speak with a higher pitch.

The authors say this could be due to a previously discovered link between deeper voices and higher testosterone levels in men, or it could be that higher voiced men develop better communication strategies to attract a mate.