Swapping meat and dairy for INSECT protein and ‘cultured’ milk could reduce global warming, water and land use by over 80%, study claims

Swapping animal products for future foods such as insect protein or cultured milk could reduce global warming, water and land use by over 80 per cent, a new study suggests.

They found that if people in Europe replaced meat and dairy with foods produced through new technologies, such as making fake steak out of bovine cells, it could significantly reduce all environmental impacts.

Not only that, but it would be nutritionally adequate and meet the constraints for what can be feasibly consumed, according to experts at the University of Helsinki.

Swapping animal products for future foods such as insect protein or cultured milk could reduce global warming, water and land use by over 80 per cent, a new study suggests. This table shows how animal-sourced products compare to vegan diets and novel or future foods (NFFs) — including cultured milk, insect meal or mycoprotein 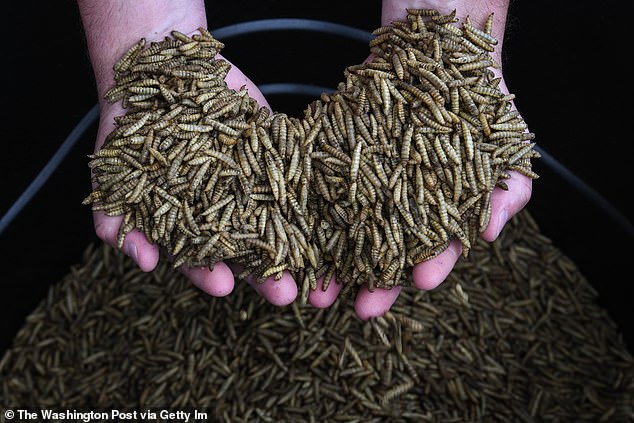 NFFs like insect protein can contain a more complete array of essential nutrients compared to currently available plant-based protein-rich (PBPR) options like legumes, pulses and grains, according to the researchers

WHAT IS INSECT PROTEIN?

Insect proteins are derived from edible insects, of which there are some 2,000 worldwide.

They offer a more sustainable alternative to traditional proteins found in meat and soy.

The hope is that by shifting towards animal proteins, it could help to reduce the 64 million tons of carbon dioxide that is emitted each year from producing and the consumption of meat-based products.

Some companies say their insect farms only generate four per cent of the current emissions released each year by farms that maintain cows, pigs and chickens.

Using insect protein as a base requires far less feed, land and water, all of which generates fewer greenhouse gases per pound than those made with beef, pork or chicken.

They said that alternative diets such as vegetarian, vegan or flexitarian, had demonstrated the health and environmental benefits of shifting towards lower meat consumption.

But novel or future foods (NFFs) — including cultured milk, insect meal or mycoprotein — can contain a more complete array of essential nutrients compared to currently available plant-based protein-rich (PBPR) options like legumes, pulses and grains, according to the researchers.

They said NFFs also tend to be more land and water-efficient than existing animal-sourced products.

Cultured milk is where it has been fermented with lactic acid bacteria such as Lactobacillus, Lactococcus, and Leuconostoc.

This increases the shelf life of the product, while also enhancing its taste and improving digestibility.

‘Global food systems face the challenge of providing healthy and adequate nutrition through sustainable means, which is exacerbated by climate change and increasing protein demand by the world’s growing population,’ the researchers, led by lead author Rachel Mazac, wrote in their paper.

‘We estimate the possible reductions in global warming potential, water use and land use by replacing animal-source foods with novel or plant-based foods in European diets.’

She and her colleagues used a programming model to identify optimal combinations of animal-sourced foods, PBPR options and NFFs with the goal of meeting nutritional adequacy, while minimising global warming potential, as well as water use and land use. 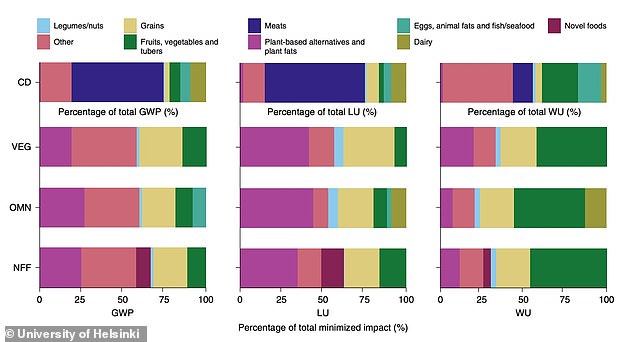 This graphic shows how current European diets (CD) compare to vegetarian, omnivore and NFFs when it comes to global warming potential, land use and water use

‘Replacing animal-source foods in current diets with novel foods reduced all environmental impacts by over 80 per cent and still met nutrition and feasible consumption constraints.

The authors concluded that, besides showing the potential contribution of novel foods towards a more sustainable food system, their findings reveal trade-offs related to each dietary option, including vegan, vegetarian and omnivore.

The study has been published in the journal Nature Food.

SHOULD YOU CUT BACK ON RED MEAT? WHAT THE EVIDENCE SAYS

Meat is a good source of protein, vitamins and minerals in the diet.

The Department of Health advises that we eat no more than 70g (cooked weight) of red and processed meat a day, which is the average daily consumption in the UK.

A 2011 report called Iron and Health from the Scientific Advisory Committee on Nutrition (SACN) assessed evidence on the link between bowel cancer and iron – meat is the main source of iron.

SACN concluded that eating a lot of red and processed meat probably increases the risk of bowel cancer, and advised accordingly.

The American Institute for Cancer Research advises we consume no more than three portions of red meat a week and urges us to ‘avoid’ processed meats.

Processed meat often contains nitrogen-based preservatives that stop it going off while being transported or stored.

These preservatives have been linked to both bowel and stomach cancer.

When red meat is digested, the pigment haem gets broken down in our gut to form chemicals called N-nitroso compounds.

These compounds have been found to damage the DNA of cells that line our digestive tract, which could trigger cancer.

Our body may also react to this damage by making cells divide more rapidly to replace those that are lost.

This ‘extra’ cell division may increase the risk of cancer.

Cancer Research UK says three chemicals in meat are linked to bowel cancer because they damage cells in the gut.

Red and processed meat has also been linked to type 2 diabetes.

This may be due to the preservatives used or the meats’ higher levels of saturated fat than chicken and fish.

However, researchers in Canada, Spain and Poland cast a shadow over eating advice adopted by health organisations around the world in November 2019.

In a landmark paper, the academics analysed past studies of how eating meat affected the health of more than four million people.

The research, published in the journal Annals of Internal Medicine, found no evidence that eating beef, pork and lamb could increase the rates of heart disease, cancer, stroke or type 2 diabetes – despite fears.