While many people are naturals at flirting, others struggle when it comes to chatting up potential dates.

Now, scientists from the University of Nicosia in Cyprus have revealed the 11 most off-putting flirting tactics, which are ‘dealbreakers’ for many people.

Their findings suggest that having a ‘slimy approach’, swearing and being too touchy are tactics to avoid, along with bad hygiene, narcissism, and low self-esteem.

Scientists from the University of Nicosia have revealed the 11 most off-putting flirting tactics, which are dealbreakers for many people

Previous studies have suggested that people vary considerably in their flirting skills, with poorer flirters more likely to be single.

In their new study, the team aimed to further explore the variation in flirting skills by identifying what constitutes a dealbreaker in flirting.

More than 200 participants completed open-ended questionnaires about the flirting tactics they find the most off-putting.

Their responses were then tested with a group of more than 700 separate participants, who were asked to rate how off-putting they found these traits in a partner.

Based on their results, the researchers identified 11 key flirting dealbreakers.

Having a ‘slimy approach’ came out as the most off-putting flirting tactic, followed by bad hygiene and lack of exclusive interest.

Differing views, vulgar vocabulary and lack of intelligence were next, followed by narcissism, lack of humour and low self-esteem, and excessive intimacy.

‘People can become more effective flirting-initiators if they work on their approach, avoid making for instance slimy and sexist comments, touching and being too intimate, and avoid also flirting with more than one individual at a time,’ the researchers, led by Menelaos Apostolou, wrote in their study, published in Personality and Individual Differences.

‘People can also improve their flirting by improving their looks (e.g., look after their skin), and by not being stingy (e.g., offer to pay the bill).’ 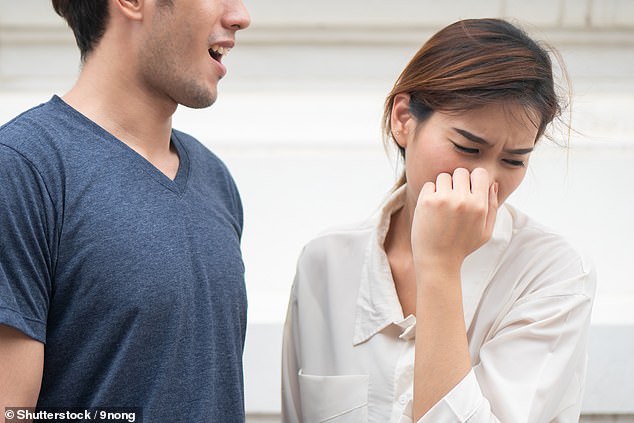 Women were found to be more sensitive to almost all 11 dealbreakers than men.

‘One reason is that women carry a larger portion of the obligatory parental investment of child-rearing, so they face a higher risk than men if they make a mistake in mate choice,’ the researchers suggest.

‘Accordingly, women have evolved to be more selective and risk-averse than men, which is reflected in their higher sensitivity to dealbreakers.’

‘Younger people aim more towards getting relationship experience with different partners than establishing a long-term intimate relationship,’ the researchers wrote.

‘Towards this end, they lower their standards, becoming in effect less sensitive to flirting dealbreakers.

‘On the other hand, as people age and they acquire more relationship experience, they become more interested in finding long-term partners, and so they have higher mating standards, and are thus, more sensitive to flirting dealbreakers. ‘

The researchers hope their findings will be useful for people who struggle with flirting.

‘The findings of the present research could be useful for people who want to improve their flirting skills, and for mental health professionals who want to help clients who face difficulties in the domain of mating,’ they concluded.

WHAT TACTICS DO PEOPLE USE TO STOP THEMSELVES CHEATING?

Researchers at the University of New Brunswick asked 362 heterosexual adults how they had staved off temptations to cheat while in a relationship.

Seventy-five per cent of the study’s respondents, who were aged between 19 and 63, selected ‘relationship enhancement’ as their primary tactic.

This ploy included things like taking their partner on a date, making an extra effort with their appearance around them, or having more sex with them.

The second most-popular was ‘proactive avoidance’, which involved maintaining distance from the temptation.

As well as physically avoiding the temptation, people also avoided getting close in conversation with that person.

3. ‘Derogation of the temptation’

The third and final tactic used by people was ‘derogation of the temptation’, which involved feelings of guilt, and thinking about the tempting person in a negative light.

Participants reported flirting less when they applied the final, ‘derogation of the temptation’ strategy.

But none of the strategies had an effect on the levels of romantic infidelity, sexual infidelity, and whether the relationship survived.

Psychologist Dr Alex Fradera, who was not involved in the research, said the findings show little can be done once feelings of temptation have crept in.