Organic leafy vegetables could be harbouring harmful bacteria such as salmonella, study warns

They’re often seen as healthier alternatives to standard fruits and vegetables, but a new study may put you off buying organic.

Researchers from the Universitat Politècnica de València tested organic lettuce and spinach samples and found that some contained harmful bacteria including Pseudomonas, Salmonella, and Helicobacter.

Worryingly, if consumed, these bacteria can cause a range of nasty infections, including pneumonia and gastrointestinal illness, the researchers warned.

Do you need to wash fruits and vegetables?

It is important to wash fruit and vegetables before eating them to remove any residue pesticides.

Produce is also at high risk of contamination from dust, dirt and bacteria as most is stored in warehouses, before travelling in containers and being stored at retailers.

Failure to wash fruit and vegetables can cause food poisoning, such as an E.coli infection.

Peeling can be effective, however, this removes fibre and important nutrients, such as vitamin C.

The term organic refers to food that is produced under strict guidance.

‘In Europe the standards are set in EU law and restrict the use of pesticides and prevent the use of herbicides in the production of food,’ the NHS explains.

‘Some people choose to eat organic foods because they are worried about residues of these pesticides in food or they may be concerned about the impact that farming has on the environment.’

While organic foods are not exposed to pesticides or herbicides, they can be contaminated with pathogens through contact with soil, irrigation water, air, rain, insects and during industrial washing.

In particular, vegetables can become contaminated with certain protozoa (single-celled organisms) such as free-living amoeba (FLA), which can act as hosts to pathogenic bacteria.

‘However, comparatively little is known about the occurrence and diversity of free-living amoebae on organic vegetables and their role in transmitting human pathogens.’

In their study, the team analysed 17 samples of organic lettuce and spinach collected from local supermarkets in Valencia between November 2020 and May 2021. 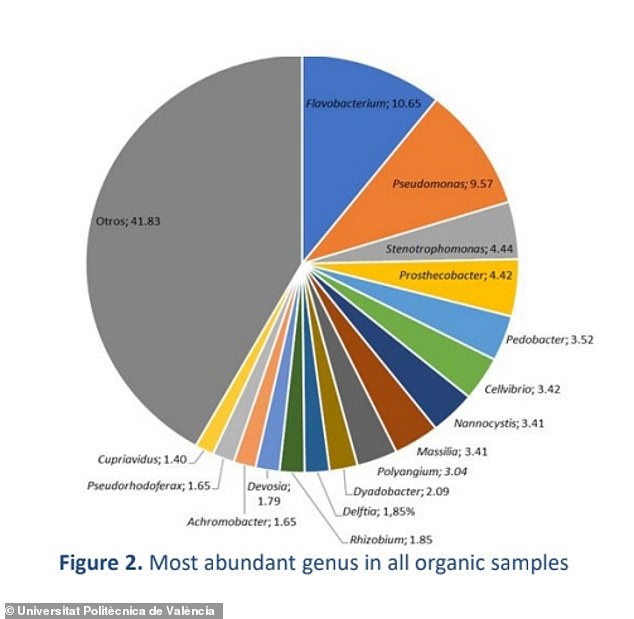 In their study, the team analysed 17 samples of organic lettuce and spinach collected from local supermarkets in Valencia between November 2020 and May 2021. Their analysis revealed that a third of the samples contained 52 potentially disease-casing types of bacteria, including Legionella, Salmonella and Arcobacter, which can cause pneumonia and gastrointestinal illness

Their analysis revealed that a third of the samples contained 52 potentially disease-causing types of bacteria, including Legionella, Salmonella and Arcobacter, which can cause pneumonia and gastrointestinal illness.

A fifth were found to contain Vermamoeba vermiformis, which causes severe infections, while almost two thirds contained Acanthamoeba castellanii, which can cause blindness and encephalitis.

‘The presence of bacteria of public health concern contained inside the free-living amoebae suggests that they are vehicles that can easily transmit pathogens capable of reaching humans and causing health problems through contaminated organic vegetables’, said Dr Moreno.

‘Contamination can arise as a consequence of treating soil with organic fertilisers such as manure and sewage sludge and from irrigation water.

‘Leafy greens are particularly susceptible to faecal contamination due to their proximity to the ground and the likelihood of humans consuming them without cooking.

‘Our results also stress the need to educate the public on safe and proper handling of fresh organic vegetables before eating them fresh or slightly cooked.’

‘The observations reported here are somewhat unsurprising, but are not unique to organic vegetables as is suggested here,’ he said.

‘It is good to read that the researchers have highlighted the advice that all leafy greens should be washed before use, which will greatly reduce the risk of food-borne infections.’

What is salmonella and staphylococcus?

Salmonella are a group of bacteria that infect the gut.

They live in animal and human intestines and are shed through feces.

Humans become infected most frequently through contaminated water or food. Contamination is possible if raw and cooked foods are stored together.

Symptoms of salmonella infections include diarrhea, stomach cramps and sometimes vomiting and fever.

On average, it takes from 12 to 72 hours for the symptoms to develop after swallowing an infectious dose of salmonella.

They usually last for four to seven days and most people recover without treatment.

But if you become seriously ill, you may need hospital care because the dehydration caused by the illness can be life-threatening.

Staphylococcus are a type of germ that cause staph infections, which affects the skin and results in boils, rashes and blotches.

But staph infections can turn deadly if the bacteria invade deeper into your body and cause sepsis by entering your bloodstream, joints, bones, lungs or heart.

Staph bacteria are one of the most common causes of food poisoning.

Symptoms come on quickly, usually within hours of eating a contaminated food.