It sounds like something straight out of Star Trek, but a new pair of augmented reality glasses launching in the UK today claim to be able to project a cinema-sized screen in front of your eyes.

The Nreal Air glasses, which are being launched by UK mobile network EE, look like a normal pair of sunglasses from the front, but have two OLED displays hidden behind the lenses.

When connected to a smartphone, these can project an ‘Imax-sized’ 201-inch virtual screen at a distance of 20 feet in front of your eyes, allowing users to stream movies and games over 5G on the go.

The glasses can also be used to mirror a connected smartphone screen or explore augmented reality apps.

The Nreal Air will go on sale through EE later in the spring, the network confirmed, with full pricing and availability still to be announced.

When connected to a smartphone, the Nreal Air can project an ‘Imax-sized’ 201-inch virtual screen at a distance of 20 feet in front of your eyes 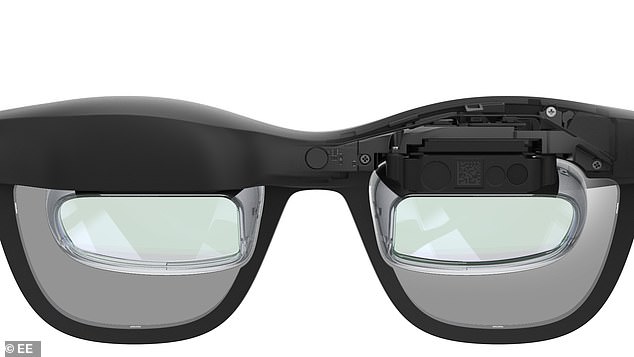 They look like a normal pair of sunglasses from the front, but have an OLED display hidden behind the lenses

Power: Up to 5 hours video streaming in Air Casting mode

‘We’re working with the best content providers and the most innovative technology companies in the world to create entirely new experiences for our customers,’ EE’s director of devices and partnerships, Alistair Wilson, said.

‘Nreal are at the forefront of AR, and we’re delighted to be the exclusive UK partner for the launch of their new Nreal Air AR glasses.

‘When combined with the power of 5G, it really does open up new possibilities for seamless streaming and access to new types of content on the move – these are really exciting times for mobile.’

Augmented reality is when virtual objects or content are overlaid on to the real world.

This is becoming an increasingly popular technology through gadgets such as smart glasses, but also through smartphone cameras and games such as Pokemon Go.

The Government has predicted a 78% increase in spending on augmented and virtual reality between 2019 and 2024.

Meanwhile EE said it had found more than a third of people (35%) were interested in a way of making big-screen experiences more mobile. 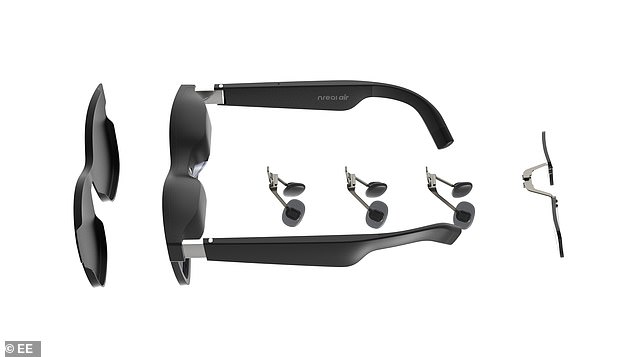 The glasses are slim, lightweight and comfortable to wear on longer journeys, providing an immersive experience on the go 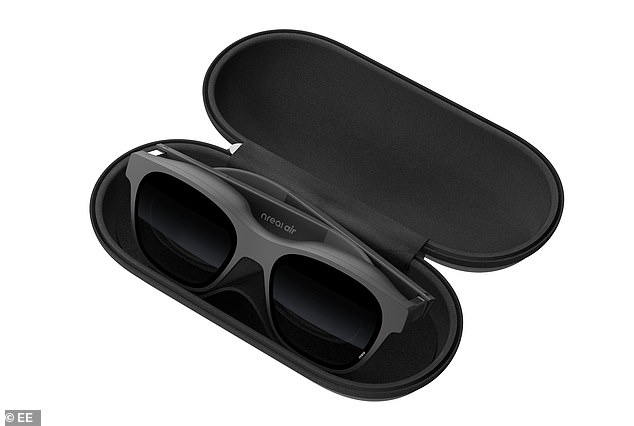 Nreal Air glasses also come with a small compact carry case, which makes them easy to slip into a pocket or bag

What are AR and VR?

Virtual reality is a computer-generated simulation of an environment or situation.

It immerses the user by making them feel like they are in the simulated reality through images and sounds.

For example, in VR, you could feel like you’re climbing a mountain while you’re at home.

In contrast, augmented reality layers computer-generated images on top of an existing reality.

AR is developed into apps to bring digital components into the real world.

For example, in the Pokemon Go app, the characters seem to appear in real world scenarios.

Nreal Air has two OLED screens hidden in the top half of the sunglasses, which are projected through a prism in the lens using down firing projectors, which wearers can also see through.

The ‘MR Space’ mode takes customers into a ‘Mixed Reality’ environment and gives them a taste of AR technologies.

For example, by ‘pinning’ multiple virtual screens in a 3D space, they can experience stationary cycling exercises in an immersive AR environment, while exploring an expanding array of AR apps.

Connecting a Bluetooth gaming controller can also turn your smartphone into a portable console, when coupled with a game-streaming platform. EE said.

Nreal co-founder Peng Jin said the company was ‘delighted’ to come to the UK with EE.

‘At Nreal, we’re passionate about bringing AR into consumers’ everyday lives, which will start a revolutionary transformation just as the internet once did,’ he said.

‘AR will transcend the current mobile experience, especially when it comes to watching videos, exercising, and playing PC and cloud video games. 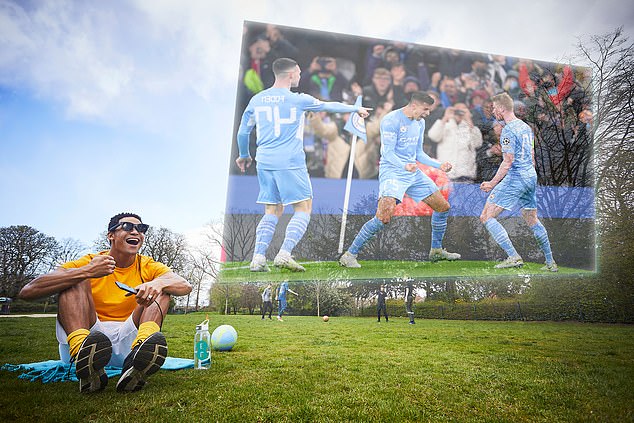 ‘As we continue to enrich the AR ecosystem with each update and upgrade, consumers will enjoy more mind-blowing digital innovations and experiences blended into everyday life.’

The Nreal Air glasses have a lightweight design and an inbuilt set of nose pads for comfort, and come with a small compact carry case.

The AR glasses work in conjunction with the Nreal Nebula app, and are compatible with a range of smartphones.

Unlike most AR glasses, Nreal Air can also be kitted out with the individual’s own prescription lenses — meaning customers do not have to use them with their normal glasses underneath.

Earlier this month, Snap – the company behind the popular smartphone app Snapchat – unveiled the latest generation of it augmented reality Spectacles, which allow users to overlay Lenses directly on to the real world.

Meanwhile, Facebook’s parent company Meta is understood to be planning the first release of its Star Trek-style smart glasses in 2024.

WHICH COMPANIES ARE WORKING ON AUGMENTED REALITY GLASSES?

Augmented reality (AR) glasses have seen a resurgence in desirability, with a host of firms working to develop their own technology.

The first company to enter the race was Google, which released the Google Glass in 2011.

Google Glass, now referred to as Glass, has been changed from a consumer-facing product to an enterprise product, used by companies like Boeing.

Since then, several companies have come out with their own products.

Tech company Vuzix, based in Rochester, New York, launched its Vuzix Blade glasses in 2019 for about $1,300.

They use a tiny projector to show a virtual image in the top right hand corner of their lenses.

Wearers can connect to WiFi and read emails and other messages via the display, as well as use Alexa, Amazon’s digital assistant, to issue voice commands.

Amazon is also rumored to be working on its own AR glasses to be released sometime in the future.

The glasses use retinal projection to put a tiny display on the wearer’s eyeball.

Snap has launched its Spectacles and there are rumours of Facebook and Apple working on AR glasses.

Niantic, the American firm being Pokemon Go, has also revealed it is partnering with Qualcomm to create its own AR headset technology.