Egyptian archaeologists have discovered ancient tombs containing mummies with golden tongues in their mouths – a possible mythological token to the afterlife.

Authorities say a number of mummies were found in Qewaisna necropolis, a burial site in Egypt with hundreds of tombs from different periods in the country’s history.

It’s thought their real tongues would have been removed during embalming and replaced with the gold object so the deceased could speak to Osiris in the afterlife.

In Egyptian mythology, Osiris is the ‘Lord of the Underworld’ and judge of the dead, and one of the most important gods of ancient Egypt.

Egyptian archaeologists have discovered ancient tombs containing mummies with golden tongues in their mouths. Also found were gold chips fashioned to take the form of cockroaches and lotus flowers 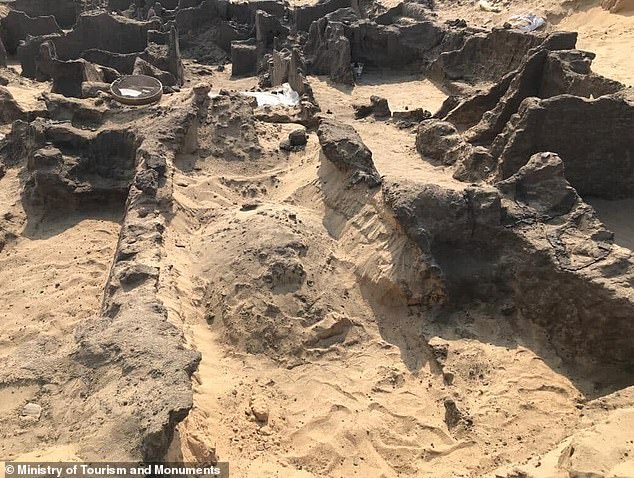 The new discoveries were unearthed in an extension of the Qwaisana Archeological Compound, which includes archaeological tombs dating back to different time periods

Gold tongues made from foil are commonly found among ancient Egyptian mummies.

They were placed on the tongues of the dead during the funeral to ensure that once in the other world the spirit could speak to Osiris.

Osiris is said to rule over the underworld and would judge the spirits of those who had died.

According to the myth, Osiris, god of the deceased, was killed and hacked into pieces that were scattered across Egypt.

Isis, the sister and wife of Osiris, was able to resurrect him after finding all of the pieces and making her husband whole again.

It is believed the presence of a gold tongue may have allowed the dead to convince Osiris to show mercy on their soul.

According to Dr Mustafa Waziri, secretary-general of the Supreme Council for Archeology, the mummies are in a poor state of preservation.

Some of them were found with golden tongues in their months, while others were covered with thin sheets of gold and placed in wooden coffins.

Others still were glazed with gold on the bone directly underneath the linen wraps used in the embalming process.

Also found were gold chips fashioned to take the form of cockroaches and lotus flowers, as well as a number of funeral ornaments, stone mortars and pottery, also likely used for embalming. 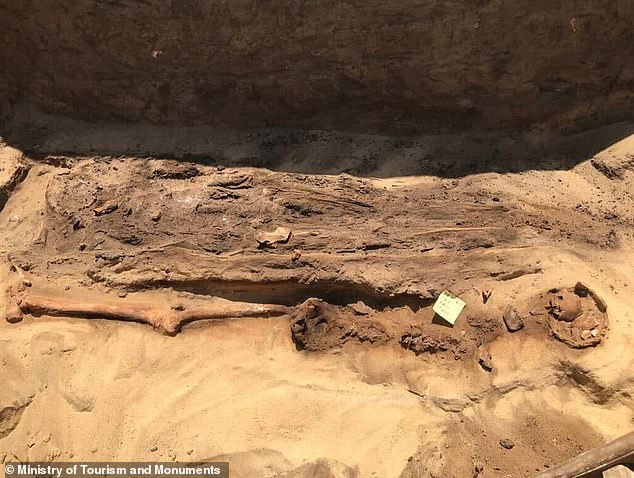 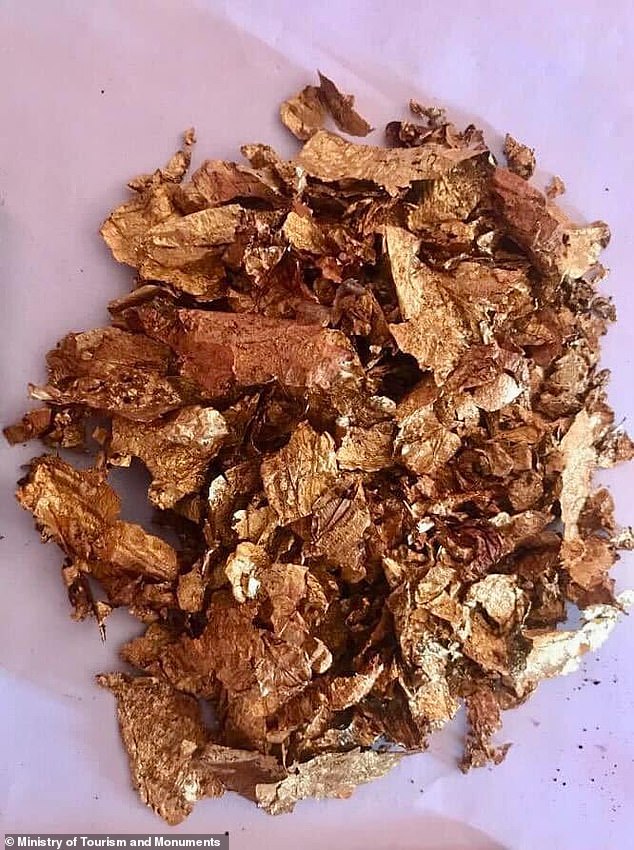 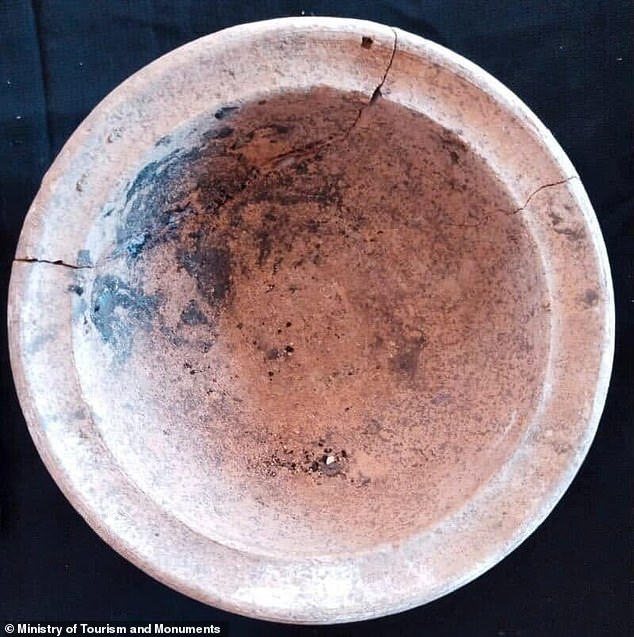 Also found at Qewaisna necropolis were s a number of funeral ornaments, stone mortars and pottery

The myth of Osiris: God of the deceased

In Egyptian mythology, Osiris ruled Egypt and taught agriculture and gave laws and civilization to humans.

However, Osiris’s brother, Seth, was jealous of him, so Seth killed Osiris and cut his body into pieces, which he distributed around Egypt.

Osiris’s wife and sister Isis roamed the country, collecting the pieces of her husband’s body, reassembling them, and holding them together with linen.

Isis breathed the breath of life into his body and resurrected him. Afterwards Isis magically conceived a child, Horus, before Osiris then descended into the underworld.

The discoveries were announced on the Facebook page of Egypt’s Ministry of Tourism and Antiquities.

It’s unclear how many mummies have been newly found or how many of them had golden tongues; MailOnline has contacted the ministry for more information.

The new discoveries were unearthed in an extension of the Qwaisana Archeological Compound, which includes archaeological tombs dating back to different time periods.

Three different levels at the compound show burial habits that are different from each other, the ministry added.

Gold tongues made from foil are commonly found among ancient Egyptian mummies.

In February last year, researchers reported the discovery of a golden-tongued mummy at Taposiris Magna, a 2,000-year-old burial site in Egypt.

The Taposiris Magna Temple, whose name means ‘great tomb of Osiris’, is located near the Egyptian city of Alexandria, once the country’s capital.

It’s also the suspected location of Cleopatra, Egypt’s last pharaoh and one of the most famous queens in history.

Earlier this month, archeologists revealed they’d discovered an underground tunnel beneath the temple that likely leads to her long-lost tomb. 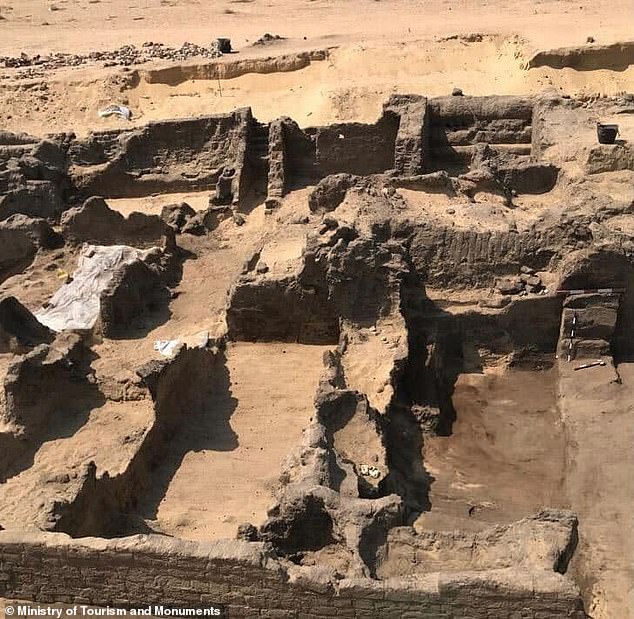 Mummies were found in the Qewaisna necropolis, a burial site in Egypt that has hundreds of tombs from different periods in the country’s history

Stone mortars and pottery found at the site were likely used in the embossment process, according to authorities 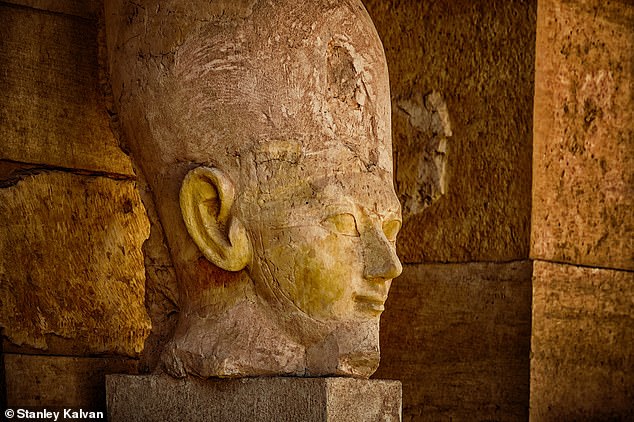 According to the myth, Osiris, god of the deceased, was killed and hacked into pieces that were scattered across Egypt. Depicted is Osiris on the facade of the mortuary temple of Hatshepsut, Egypt

Two years ago, they reported the discovery of the mummies of two high-status ancient Egyptians, one male and one female.

These two mummies were also found in a poor state of preservation because water had seeped into the tomb.

But they were originally covered with gold leaf, a luxury reserved for only the top members of society’s elite, suggesting they personally interacted with Cleopatra.

Earlier this year, another team of researchers claimed they found the oldest known mummies in the Sado Valley, Portugal, dating back 8,000 years.

Soft tissue is no longer preserved and the bodies are completely skeletonised, meaning that the Sado Valley bodies are not in a mummified state any longer.

Technically, a mummy is a dead human or an animal whose soft tissues and organs have been preserved.

EMBALMING THE DEAD IN ANCIENT EGYPT

It is thought a range of chemicals were used to embalm and preserve the bodies of the dead in ancient cultures.

Russian scientists believe a different balm was used to preserve hair fashions of the time than the concoctions deployed on the rest of the body.

Hair was treated with a balm made of a combination of beef fat, castor oil, beeswax and pine gum and with a drop of aromatic pistachio oil as an optional extra.

Mummification in ancient Egypt involved removing the corpse’s internal organs, desiccating the body with a mixture of salts, and then wrapping it in cloth soaked in a balm of plant extracts, oils, and resins.

Older mummies are believed to have been naturally preserved by burying them in dry desert sand and were not chemically treated.

Gas chromatography/mass spectrometry (GC/MS) techniques have been deployed in recent years in find out more about the ancient embalming process.

Studies have found bodies were embalmed with: a plant oil, such as sesame oil; phenolic acids, probably from an aromatic plant extract; and polysaccharide sugars from plants.

The recipe also featured dehydroabietic acid and other diterpenoids from conifer resin.

Blue Origin plans to fly an all-FEMALE crew into space next year – led...

Artificial intelligence could kill off the human race and make mankind extinct, MPs are...

Huge asteroid the size of a London bus will fly within 2,100 miles of...

Drones could soon be forced to have electronic NUMBER PLATES so police can track...

Morse Code is making a comeback! Children as young as FIVE are learning it

Dog is spotted chewing through a letter box...