In 2019, a marine heatwave hit the Hawaiian Islands, causing a huge expanse of unusually warm water to build up in the area.

Now, scientists from Arizona State University have released aerial maps that show the effects the marine heatwave had on coral.

The maps reveal how reefs near heavily developed coasts were more susceptible to bleaching during the marine heatwave.

However, other areas appeared to offer safe havens for corals, with more than 10 ‘refugia’ discovered along eight islands.

Brian Neilson, co-author of the study, said: ‘These findings can be incorporated into management plans to aid in building a resilient network of reef regions and sustaining Hawaii’s reefs and the communities that depend on them into the future.’

Scientists from Arizona State University have released shocking maps that show the effects the marine heatwave had on coral. Brighter colours indicate locations of corals that died after a bleaching event

Why are reefs near developed coasts more susceptible?

The maps showed that coral mortality was highest along highly developed coasts.

The researchers suggest that pollution entering the reefs is higher in these areas.

This creates an unfavourable environment for coral reefs already fighting to survive the warming water.

Previous studies have shown that when water is too warm, corals expel the algae living in their tissues and turn completely white – a process known as coral bleaching.

In their new study, the researchers set out to understand which corals are most affected by bleaching during a major marine heatwave event.

The team took to the skies over the Hawaiian Islands on board the Global Airborne Observatory (GAO) aircraft, both before and after the marine heatwave.

GAO is equipped with advanced spectrometers that can map ecosystems both on land, and beneath the ocean surface.

The maps reveal how Hawaii’s coastal ecosystem has changed over time.

‘We discovered coral “winners” and “losers.”

‘And these winning corals are associated with cleaner water and less coastal development despite elevated water temperatures.’

The maps reveal more than 10 potential habitats that may offer a safe haven for corals, called ‘coral refugia’.

In these areas, there was up to 40 per cent less coral mortality than on neighbouring reefs, despite similar heat stress. 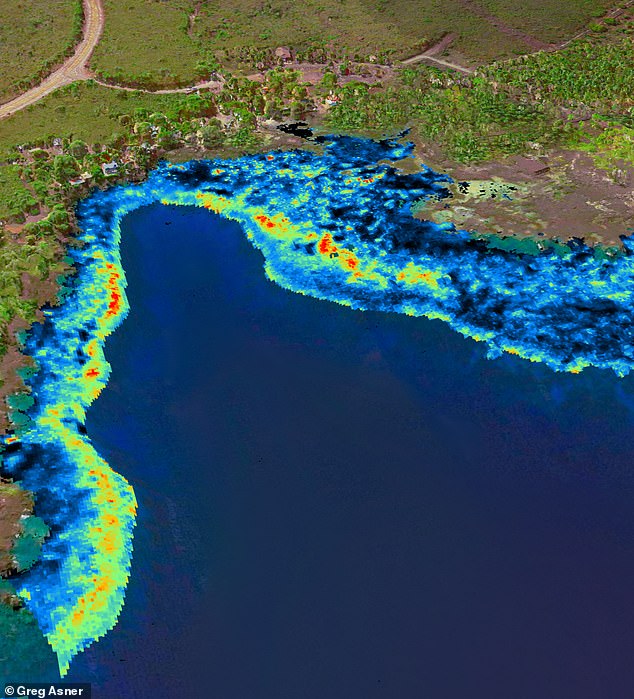 Previous studies have shown that when water is too warm, corals expel the algae living in their tissues and turn completely white – a process known as coral bleaching

In contrast, the maps showed that coral mortality was highest along highly developed coasts.

The researchers suggest that pollution entering the reefs is higher in these areas, creating an unfavourable environment for coral reefs already fighting to survive the warming water.

The Holomua 30×30 initiative aims to effectively manage Hawaii’s nearshore waters with 30 per cent established as marine management areas by 2030.

‘Previous approaches have failed to deliver actionable interventions that might improve coral survival during heat waves or to locate places of heatwave resistance, known as coral refugia, for rapid protection,’ said Mr Asner, who is also director of the Global Airborne Observatory.

‘Our findings highlight the new role that coral mortality and survival monitoring can play for targeted conservation that protects more corals in our changing climate.’

Corals have a symbiotic relationship with a tiny marine algae called ‘zooxanthellae’ that live inside and nourish them.

When sea surface temperatures rise, corals expel the colourful algae. The loss of the algae causes them to bleach and turn white.

This bleached states can last for up to six weeks, and while corals can recover if the temperature drops and the algae return, severely bleached corals die, and become covered by algae.

In either case, this makes it hard to distinguish between healthy corals and dead corals from satellite images.

This bleaching recently killed up to 80 per cent of corals in some areas of the Great Barrier Reef.

Bleaching events of this nature are happening worldwide four times more frequently than they used to.

An aerial view of Australia’s Great Barrier Reef. The corals of the Great Barrier Reef have undergone two successive bleaching events, in 2016 and earlier this year, raising experts’ concerns about the capacity for reefs to survive under global-warming