The local news station confirmed the deaths of meteorologist Jason Myers and pilot Chip Tayag after the helicopter they were traveling in crashed along Interstate 77.

In a statement posted to their website Tuesday, the station said they are ‘working to comfort their families’ during this time.

‘The WBTV family is grieving a terrible loss. Our news helicopter Sky3 crashed mid-day Tuesday with two of our colleagues on board,’ the statement read.

The helicopter was destroyed following the crash 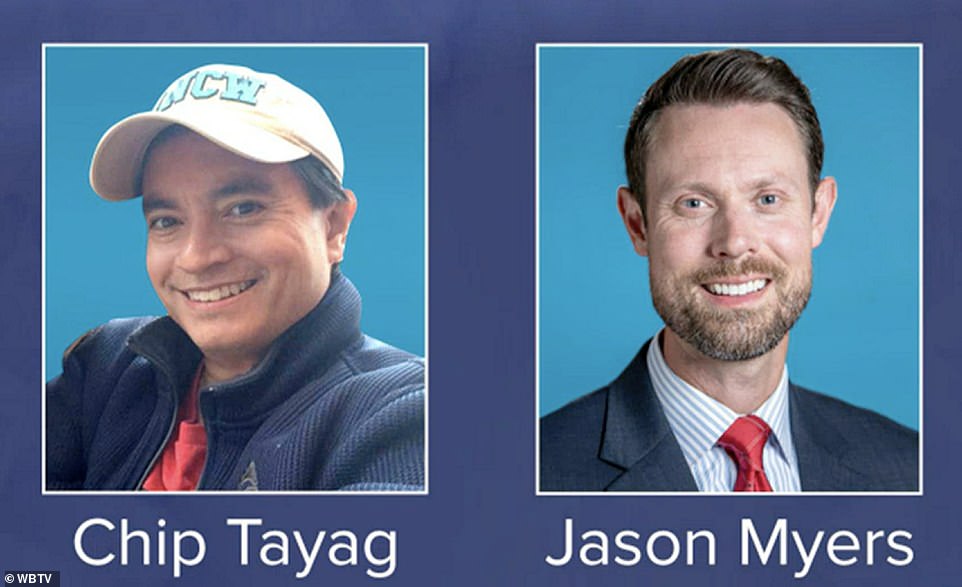 Chip Tayag and Jason Myers were identified as the victims killed in the helicopter crash Tuesday afternoon in Charlotte, North Carolina 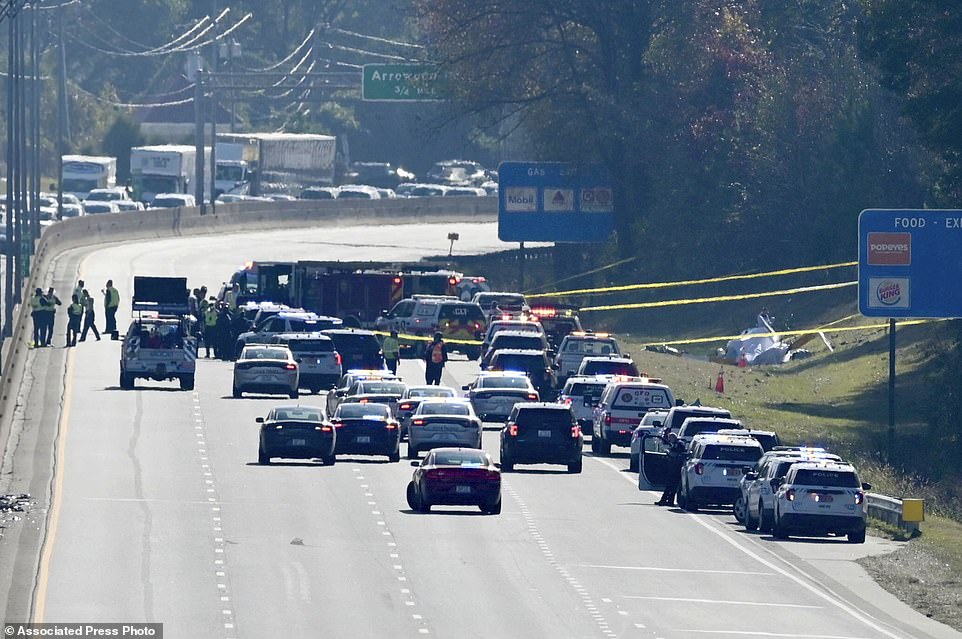 Emergency personnel work at the scene of a helicopter crash on the side of Interstate 77 South in Charlotte, N.C

‘Meteorologist Jason Myers and pilot Chip Tayag lost their lives. We are working to comfort their families in this difficult time.

‘We appreciate the outpouring of support for our staff and your continued prayers for their families,’ the station said Tuesday.

During a news conference after the crash, Charlotte-Mecklenburg Police Department Chief Johnny Jennings called Tayag a hero and said that his ‘diversionary moves’ saved countless lives.

‘It seems the pilot that was operating the aircraft made some diversionary moves to avoid hitting traffic. Fortunately, there was no vehicles involved in it.

‘And I think that’s as we move forward. To me, it looks like a heroic incident where the pilot tried to avoid injuring anyone else and putting anyone else in danger.

And if that is truly the case, then that pilot is a hero to hit my eyes,’ Jennings said.

According to WBTV, Tayag had flown for the station more than 2,000 hours in his five years and had more than 3,700 flights in his log.

The FAA said in a statement said they are investigating the crash, which happened around 12.20pm.

At this point, it’s still unclear what caused the fatal crash. 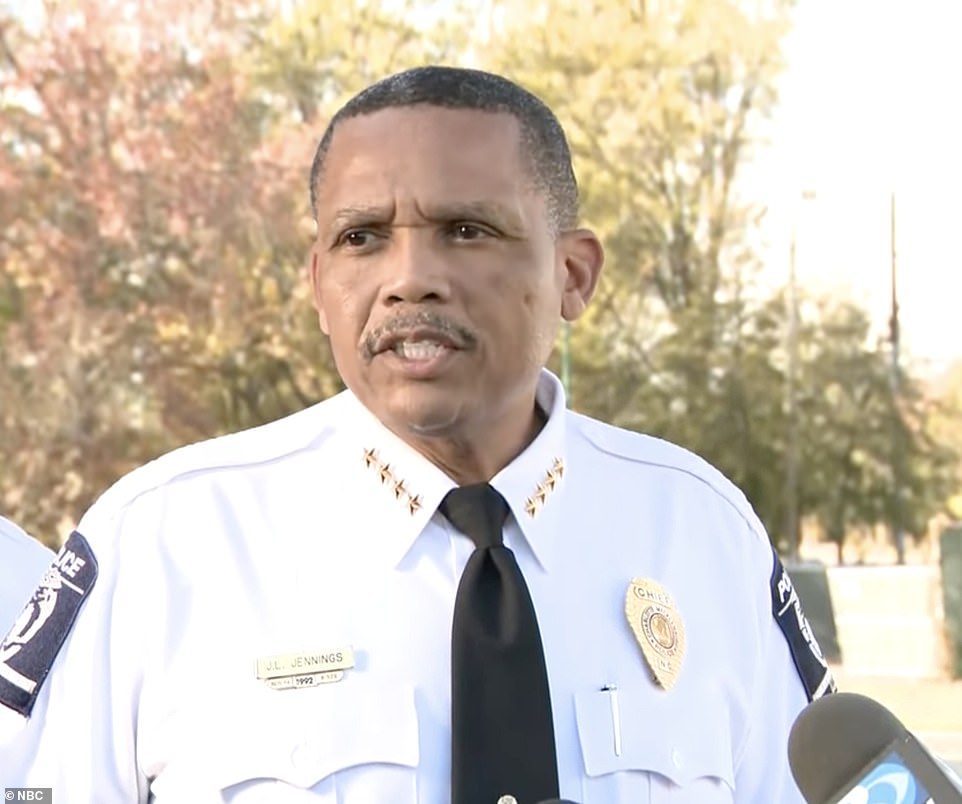 ‘That pilot is a hero to hit my eyes,’ said Charlotte-Mecklenburg Police Department Chief Johnny Jennings regarding reports that Tayag used ‘diversionary’ tactics to avoid the freeway 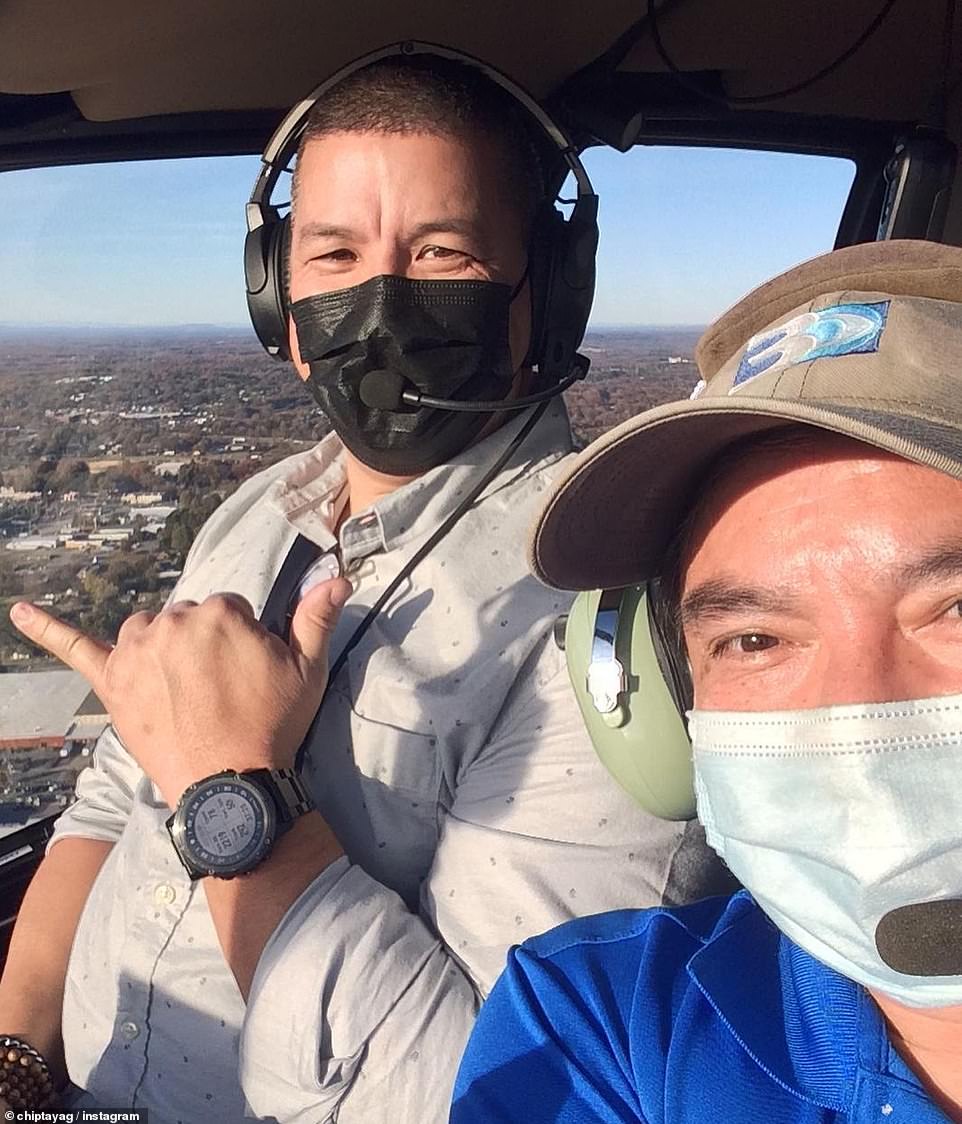 The National Transportation Safety Board will also assist in the investigation into what lead to the crash and the WBTV employees’ deaths.

In the statement published by the local news station, Tayag had been a pilot for more than 20 years and ‘was known in the company for being one of the best pilots and was constantly studying to make himself a better pilot.’

‘We always said that if we could duplicate Chip and his piloting skills, his organization abilities, and attention to detail, our company would be better off.

‘He always cared about the job he was doing and strived to make all his passengers comfortable while covering the news in Charlotte,’ Total Traffic and Weather Network said after his death.

Myers was a North Carolina native and even ‘watched WBTV as a child,’ the station said in their statement Tuesday.

The meteorologist leaves behind a wife, Jillian, and four children.

Jilian and Jason were childhood friends and sweethearts.

Myers had previously worked in Raleigh, Texas, and Virginia. He was a graduate of North Carolina State University. 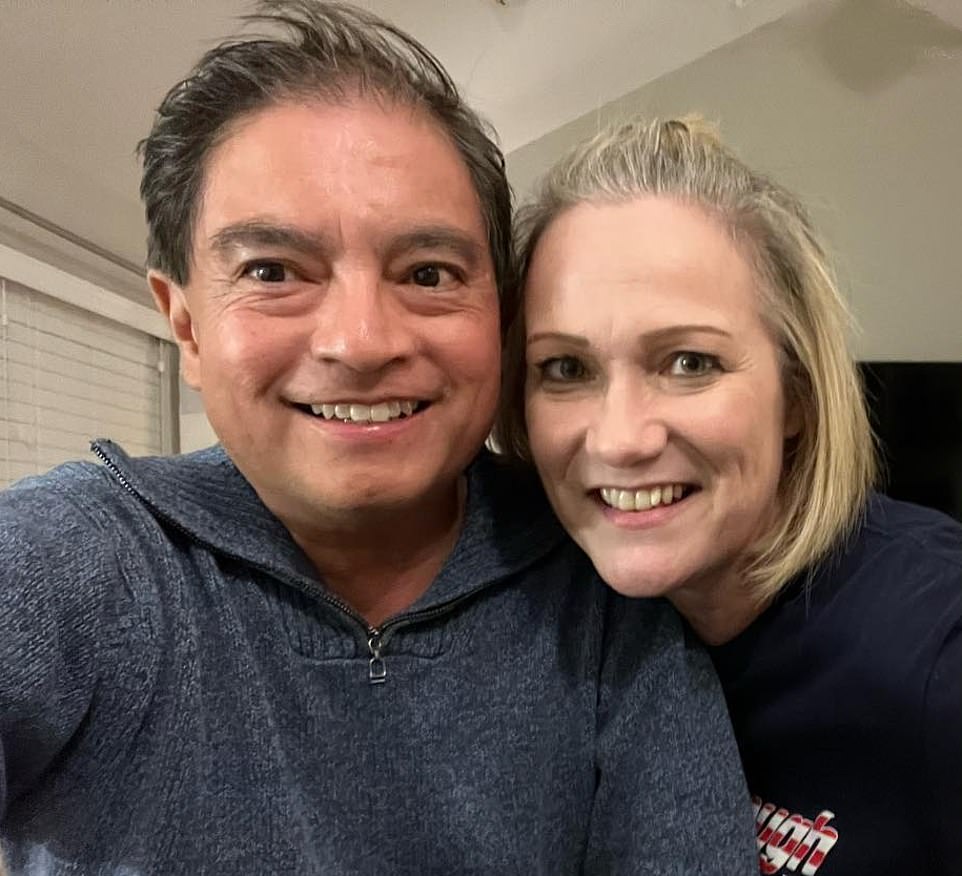 Chip Tayag and his wife, who he just celebrated his three year anniversary with in August 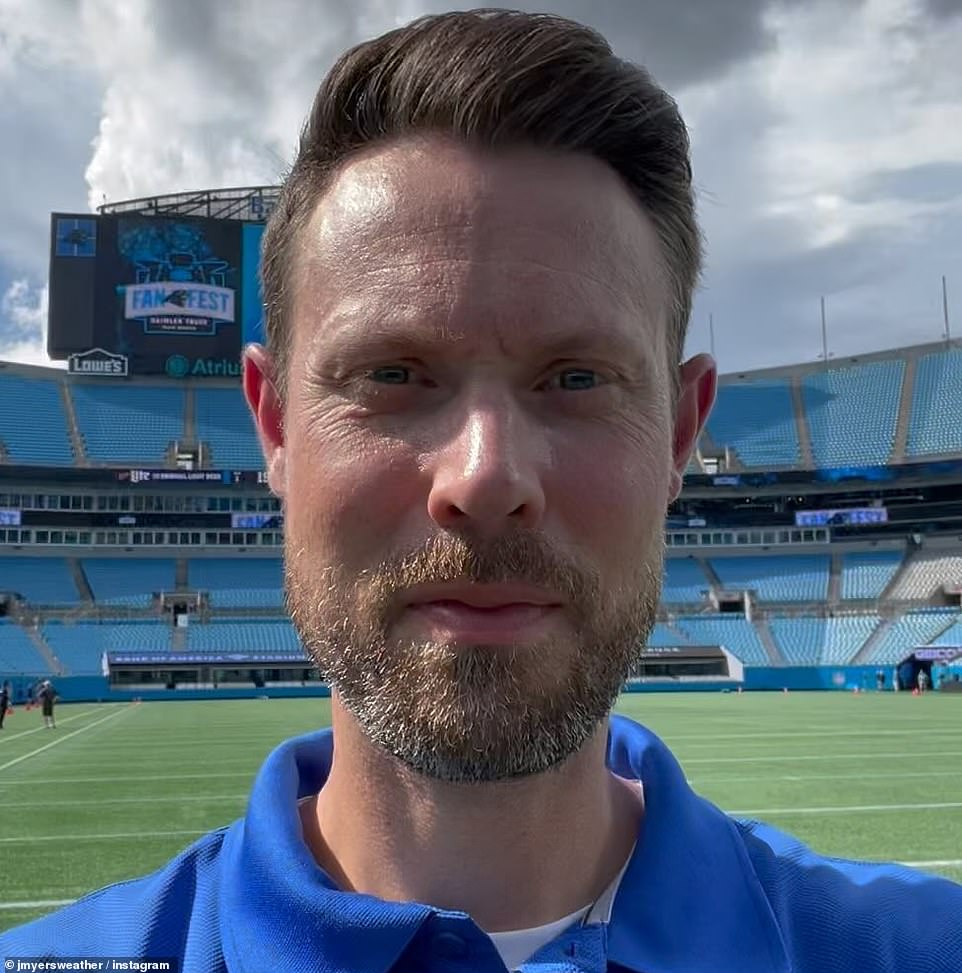 Jason Myers was a Charlotte, North Carolina, native and grew up watching the station he eventually worked at as an adult, officials said 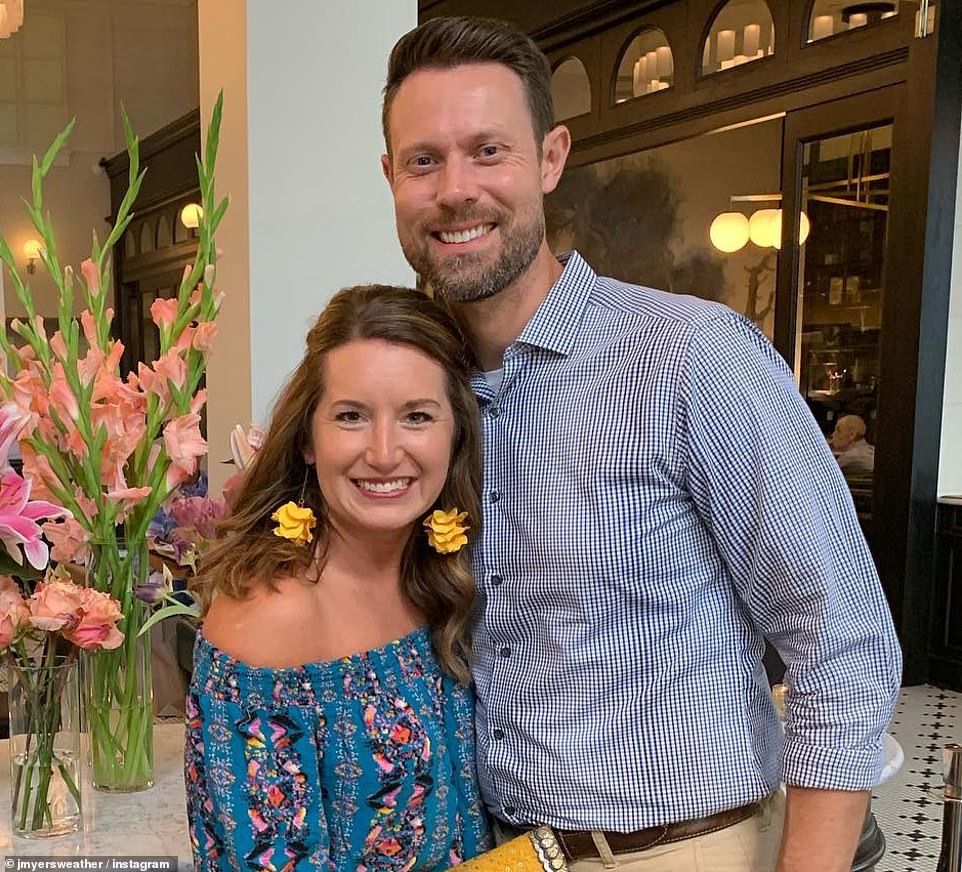 Jason married his childhood friend, Jillian, and the couple had four children together 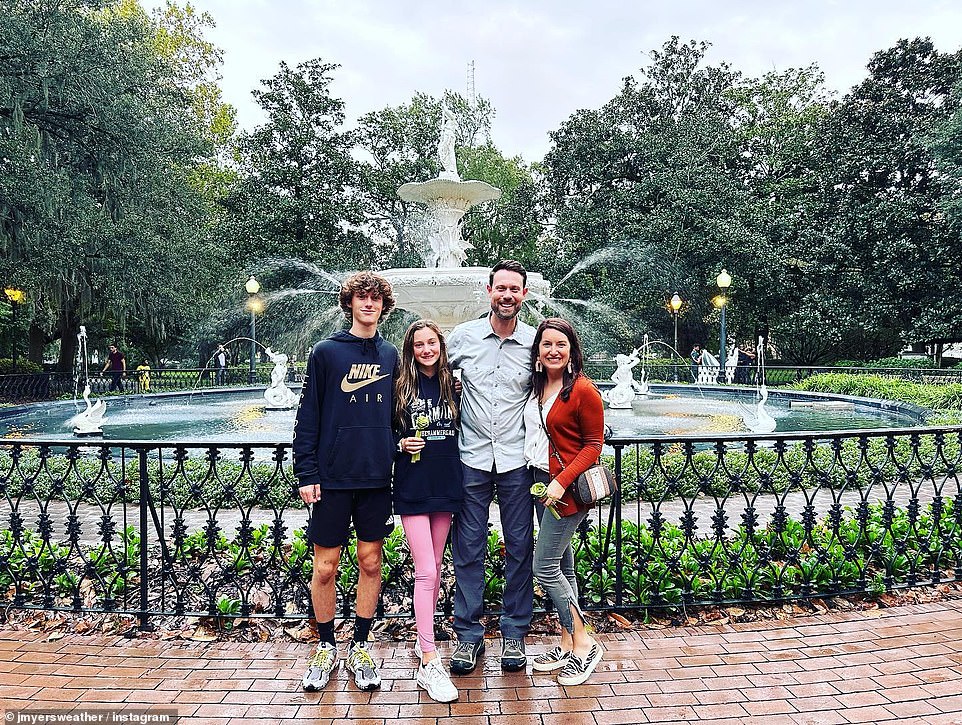 In a photo posted to Instagram just days ago, Myers said that he and his wife, along with at least two of their children, had just gotten back from a trip to Savannah, Georgia

Fighting back tears during a broadcast, anchors Jamie Boll and Molly Grantham mourned their colleagues while providing updates as they received them.

They included witness reports that Tayag prevented the helicopter from crashing onto Interstate-77 during a busy week of holiday travel.

‘Jamie and I are learning it here as our newsroom is learning it and trying to figure it out while deeply grieving …,’ Grantham said during the broadcast.

‘We´re giving the news and we´re all – all – of our WBTV family grieving Chip and Jason because we love them.’

Boll and Grantham spent at least 90 minutes providing live coverage before halting to confirm the deaths of Myers and Tayag, having made sure their families were notified.

The broadcast did not cut away from a screen showing the pictures of Myers and Tayag for nearly two minutes as the anchors grappled with the news of their coworkers’ deaths. 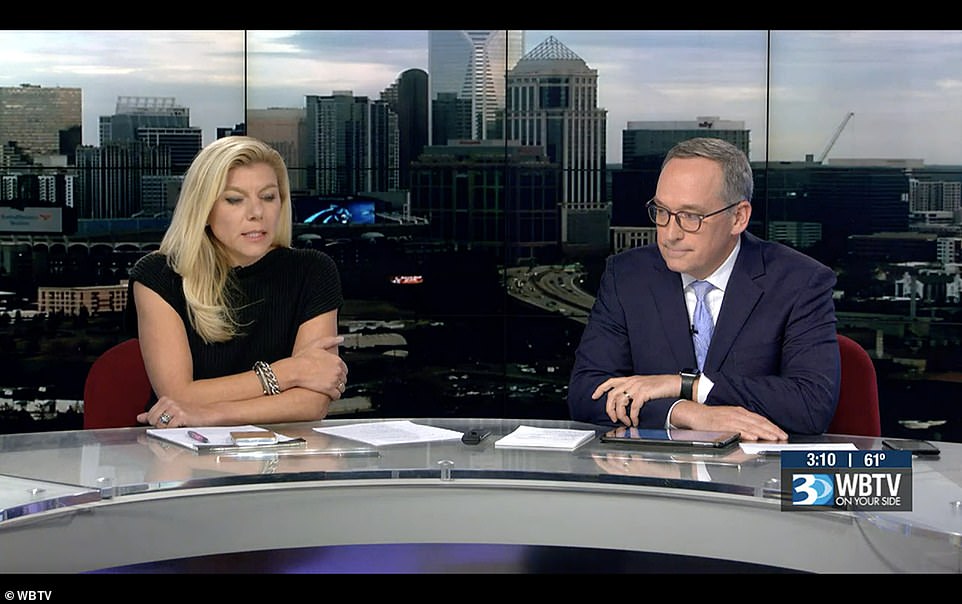 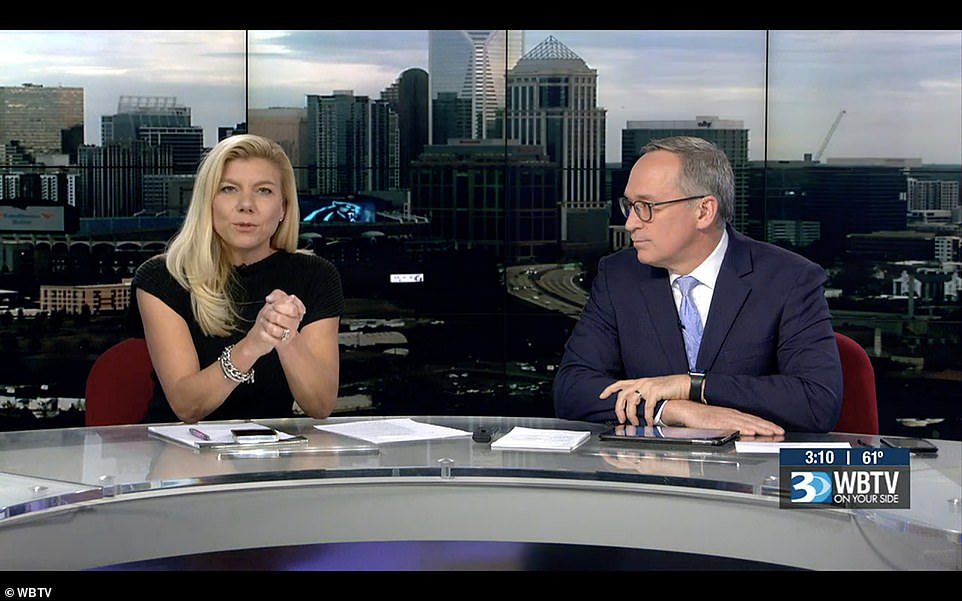 Tributes began pouring in late Tuesday afternoon from friends, coworkers, and even those who did not know the pair.

Just hours after their deaths, the Carolina Panthers shared their condolences and announced they would honor the WBTV employees at a tree lighting scheduled for Tuesday evening.

‘Our thoughts are with our friends at WBTV on the loss of Jason Myers and Chip Tayag.

‘We will have a moment of silence at tonight’s Tree Lighting in their honor,’ the team said in a tweet.

Another WBTV employee shared a photo of himself in the Sky3 helicopter that Tayag and Myers were in when they died in a memorial post.

David Whisenant, a reporter at the Charlotte television station, asked fans to pray for the WBTV family as well as the families of the victims.

‘Yes, I had a goofy look on my face because I was so excited to go flying with Chip in Sky 3,’ Whisenant said of one of the pictures he share.

If you pray, please pray for his family, the family of @JMyersWeather⁩, and our ⁦@WBTV_News family. We are hurting.’

The Charlotte Hornets, the Major League Basketball team for the city, offered their condolences and called the helicopter crash a ‘devastating tragedy.’

‘We send our condolences to the families of Jason Myers and Chip Tayag and everyone at WBTV after today’s devastating tragedy,’ the team wrote.

WBTV’s reporting partner, Axios Charlotte, also issued a public statement Tuesday calling Tayag, Myers, and the entire team at the station ‘among the best human beings in the business.’

‘We at Axios Charlotte wish to send our condolences to the friends and family of WBTV’s Jason Myers and Chip Tayag, who died in a helicopter crash today. WBTV is our news partner, and the people who work there are among the best humans in the business. We are devastated for them,’ the news outlet said.

Axios Charlotte, a ‘news partner’ of WBTV, said that those who work at the station are ‘among the best humans in the business’ and said they are ‘devastated’

‘This is a terrible tragedy for the WBTV family and we are praying for them and all of those in the media who work so hard to keep the public informed,’ said North Carolina Governor Roy Cooper.

For hours after the crash, several lanes of traffic were closed to the public near the exit for Nations Ford Road.

‘Two lanes have reopened on I-77 southbound for commuters. Please drive cautiously as we still have workers on scene,’ officials with the Charlotte-Mecklenburg Police said just before 4.30pm Tuesday.