Wagner Group mercenaries have been filmed fighting in Ukraine for the first time as Russian troops go house-to-house in the bloody battle for control of Donbas.

Drone footage from the town of Popansa, in Ukraine’s east, shows a squad of Russians involved in intense street fighting with Ukrainian defenders – storming a house and throwing grenades before forcing them to surrender.

The soldiers are mercenaries from the Wagner Group, according to pro-Russian sources – a shadowy military contractor with links to the Kremlin which is thought to be responsible for atrocities in conflicts from South America to the Middle East.

The footage emerged as UK intelligence said today that Russian forces are ‘struggling to break through defences and build momentum’ in the fight for Donbas, the outcome of which is seen as pivotal to the overall war.

Russian soldiers – believed to be from the feared Wagner Group – have been filmed fighting in Ukraine for the first time (pictured top left, storming a trench) 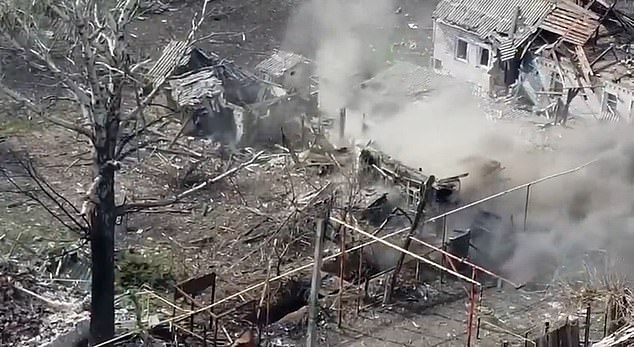 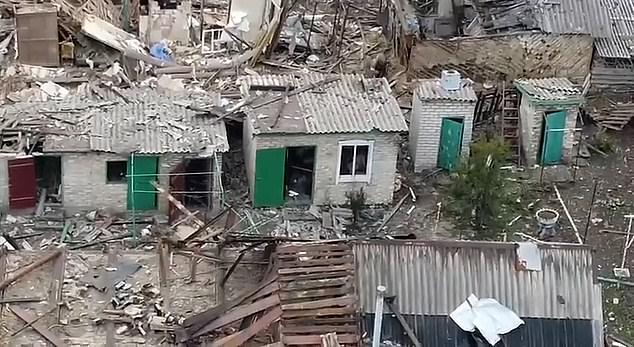 Britain’s Ministry of Defence said that, despite these setbacks, Russian commanders appear set on attempting to capture the cities of Severodonetsk and Kramatorsk – to the north and west of Popansa, respectively – using forces massed in the area.

‘Capturing these locations would consolidate Russian military control of the north-eastern Donbas and provide a staging point for their efforts to cut-off Ukrainian forces in the region,’ the MoD said this morning.

Footage of the Wagner mercenaries first appeared on the Telegram channel of ‘Colonel Cassad’ – a pro-Russian blogger named Boris Rozhin who is based in Crimea who posts updates from Ukraine to an audience hundreds of thousands strong.

It was re-posed by Rob Lee, a respected analyst from the War Studies department of King’s College, who repeated Rozhin’s claim that the troops are from Wagner.

Russia has turned its attention on capturing Ukraine’s eastern regions after its initial attempts to capture Kyiv and other key cities in the north failed with Moscow’s forces suffering heavy casualties.

Fighting is now ongoing along a stretch of frontline hundreds of miles long, stretching from Kharkiv in the north to Mariupol in the south, and along the Azov and Black Sea coasts to Kherson and Mykolaiv.

Some of the most-intense battles are currently taking place in Popansa and Lyman, around 35 miles to the north, as the Russians attempt to surround the cities of Severodonetsk and Lysychansk, which span the Donets river.

Doing so would cut off the Ukrainian defenders from reinforcements and make the cities  easier to capture. If they fall, they could then be used as a staging post to push further west – to Slovyansk and Kramatorsk. 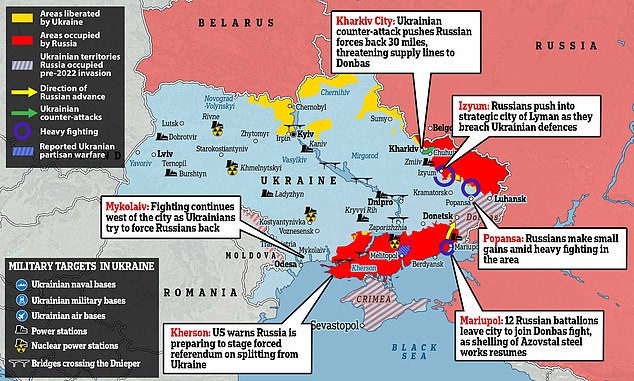 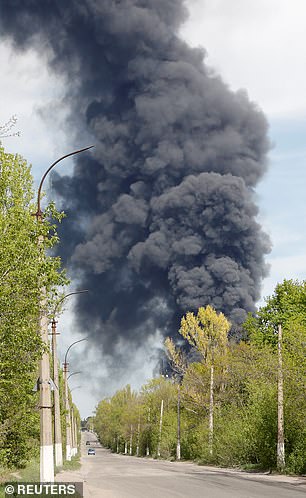 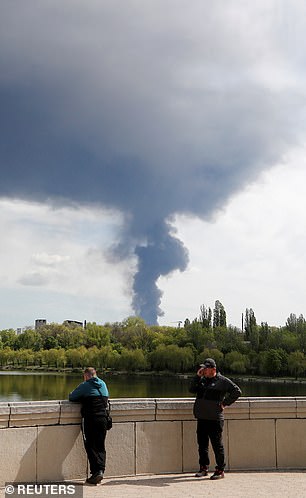 Smoke rises over a military facility in Russian-occupied regions of Donetsk today, the latest in a series of blazes at Russian military sites 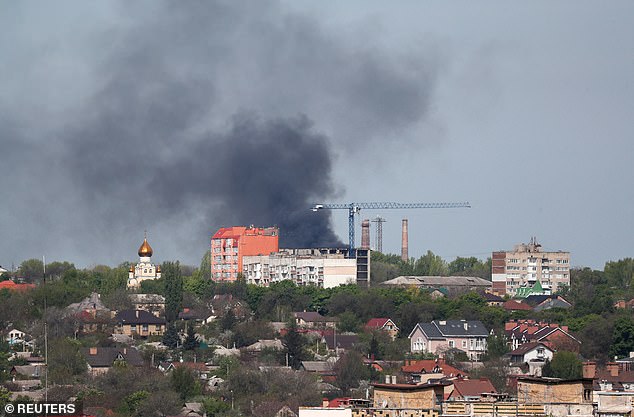 Smoke rises over a burning oil storage facility in Russian-held regions of Donetsk, in Ukraine 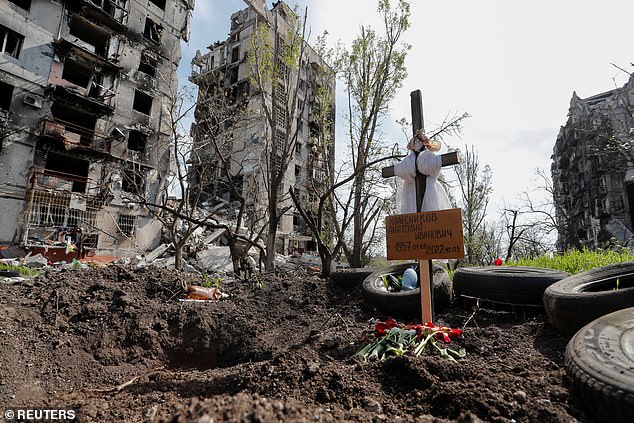 A hastily-dug civilian grave is seen in the city of Mariupol, which has been near-totally destroyed by Russian attacks 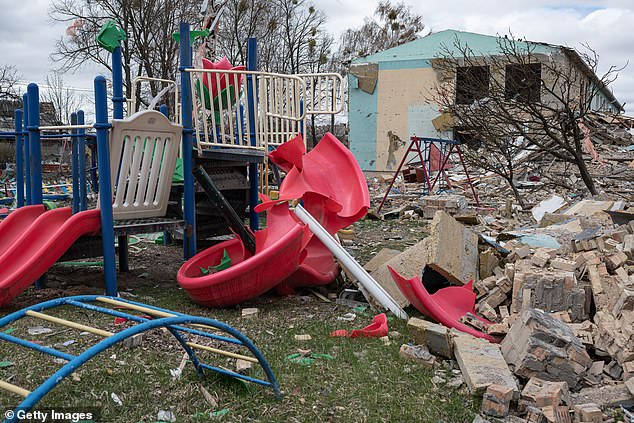 Russia’s overall aim in Donbas appears to be a push southwards from Izyum – where the bulk of its forces are concentrated – to the rebel-held city of Donetsk.

The move, coupled with the capture of Mariupol in the south – where units of Ukrainian defenders are still holed up inside a sprawling steel works in the centre of the city – would allow Putin to claim control over most of the Donbas region.

Heavy fighting is ongoing in Mariupol, where defenders inside the Azovtstal plant said on Tuesday that they were being shelled and that Russian troops were attempting to storm the complex.

‘We will do everything possible to repel this assault,’ Captain Sviatoslav Palamar said in a video update from inside Azovstal.

‘Liberating’ the Donbas, which has little strategic value but is of huge ideological importance to Putin, was one of his key aims at the start of the war and winning the battle would allow him to claim some form of victory.

Depending on how badly Russian units suffer in the fight, he could either stop the offensive there or renew attacks further to the west.

Russia’s generals have said they want to capture Ukraine’s Black Sea coast, which would mean targeting Mykolaiv and Odesa next. Putin is also reportedly eager to seize control of President Zelensky’s birthplace of Kryvyi Ri.

Zaporizhzhia and Dnipro, both major cities spanning the Dnipro river which have provided safe haven to refugees fleeing conflict in Donbas, could also be hit.

Putin may even decide to return to his early failed offensives, by renewing attacks on Chernihiv, Sumy, Kharkiv and even Kyiv.

But such an outcome is far from assured. While Russia has gained some territory in Donbas, Ukraine’s frontline has largely held up until now – and in some places Moscow’s troops are stretched thin enough to allow them to counter-attack. 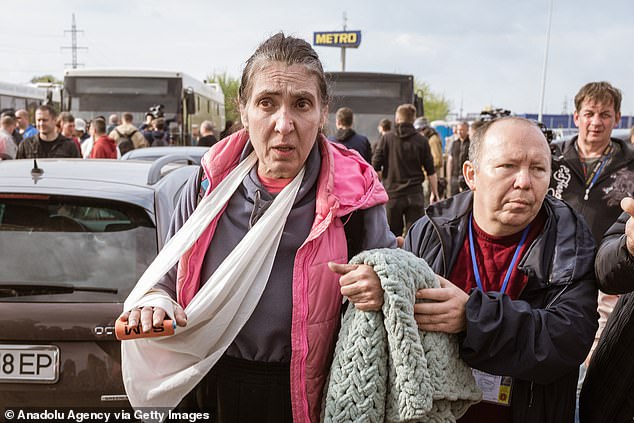 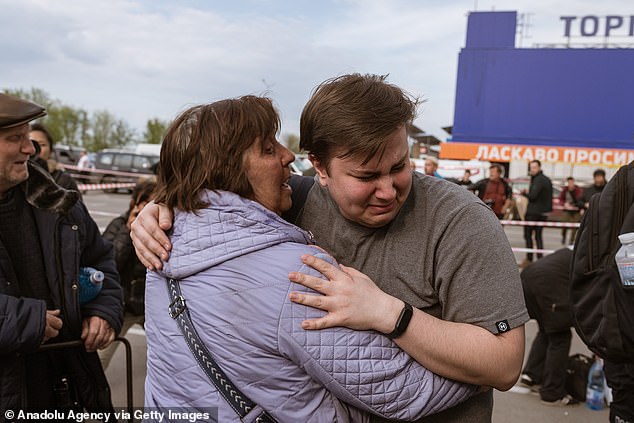 Families and loved ones hug each-other as they reunite in Zaporizhzhia after being evacuated from the Azovstal steel works, in Mariupol 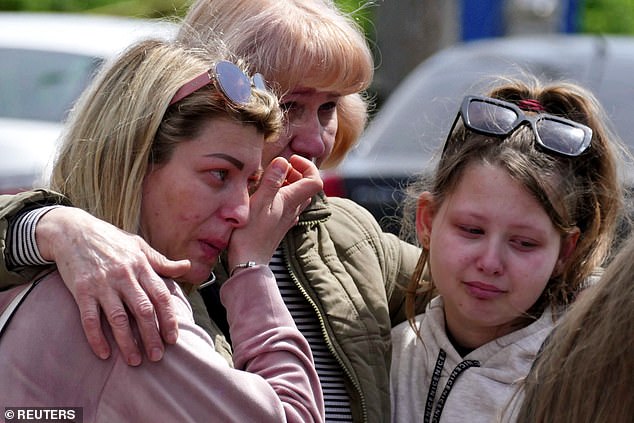 A family weeps after being evacuated to safety from the Azovstal steel works, in Mariupol 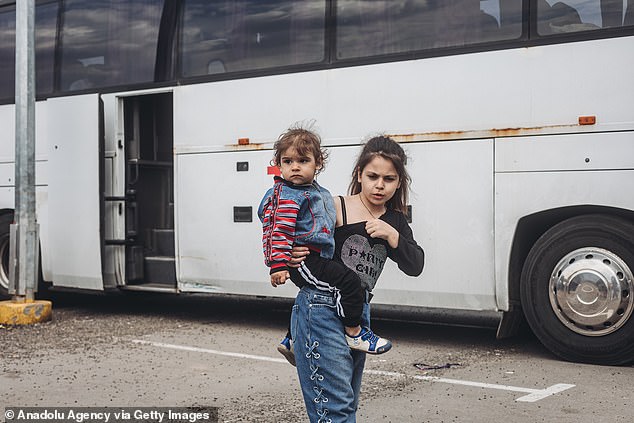 Soldiers defending the city of Kharkiv, Ukraine’s second-largest, have managed to push some 30 miles east of the city and recapture villages once held by Russia.

The move relieves pressure on the city, which has been under threat of attack since the early days of the war and has been heavily bombed, and also threatens Russian supply lines for its forces at Izyum.

There is just one major road connecting the Russian city of Belgorod, which is functioning as the main supply hub, to Izyum – which is increasingly vulnerable to Ukrainian attacks.

Disrupting the flow of supplies to the front could cause Russia’s offensive to stall or collapse completely, as happened to the north of Kyiv before troops retreated.

If that happens, the Putin will be deprived of even the most basic of victories.

Depending on how badly his forces are mauled, it could open up the prospect of Ukraine going on the offensive to recapture not just the territory lost during the present invasion, but areas it has not controlled since 2014.

President Zelensky spelled out this goal on Tuesday, saying his aims are to halt Russia’s advance, reclaim territory, and then to restore Ukraine within its accepted borders through diplomacy.

‘We are not retreating,’ Zelensky told a summit organised by the Wall Street Journal. ‘Victory will be ours.’

Liz Truss, the UK foreign secretary, has also stated that ‘victory’ in Ukraine will be achieved when the entire country is back under the control of Kyiv.

In a speech last week, she vowed to go ‘further and faster’ in deliveries of heavy weapons such as tanks and artillery until that goal is achieved.

She spoke after Lloyd Austin, the US defence secretary, said the goal of American weapons supplies is to weaken Russian to the point where it can no longer bully or threaten its neighbours. 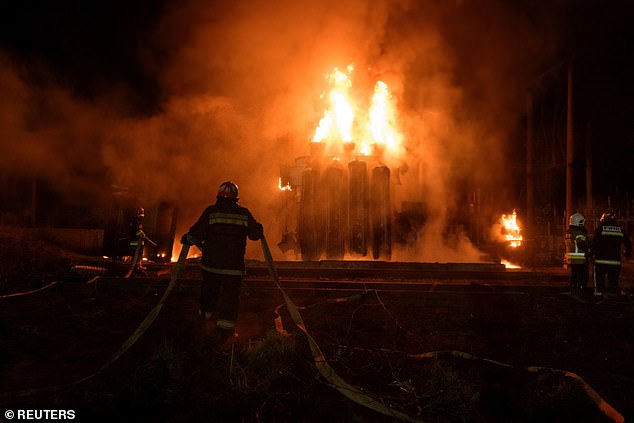 Firefighters tackle a blaze in Lviv, western Ukraine, after it was hit by Russian airstrikes 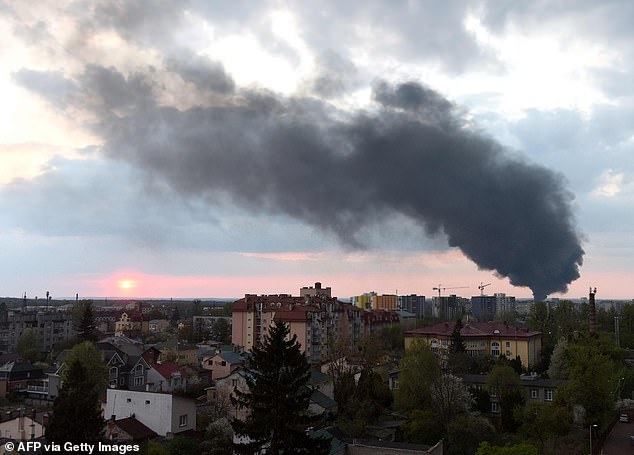 Smoke rises from a damaged electrical substation in Lviv, western Ukraine, on Tuesday