UK weather: Britain is hit by Bank Holiday showers before 21C this Thursday

After a mild but dreary Bank Holiday Monday today for much of Britain, weather conditions are set to improve with sunshine and 22C (72F) highs later this week – putting the country on a par with European holiday spots.

Forecasters said today ‘will not be a scorcher but it will not be a washout’ with temperatures of up to 18C (64F) in England and 16C (61F) in Wales, Scotland and Northern Ireland – and rain most likely in western areas.

Today will bring a mostly dry and bright morning for many parts with some spells of sunshine, but fair-weather cloud and showers will then develop throughout the day along with a gentle breeze in coastal areas. 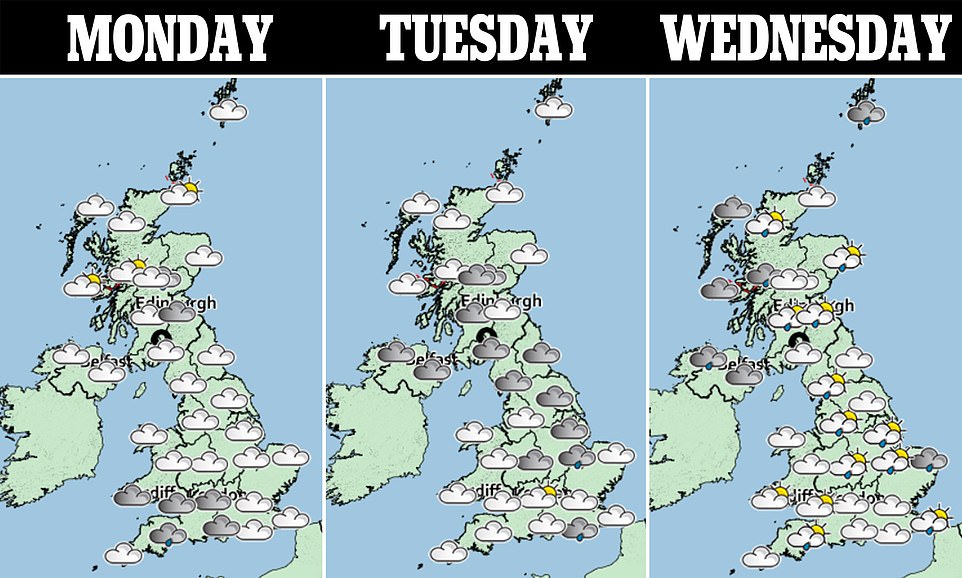 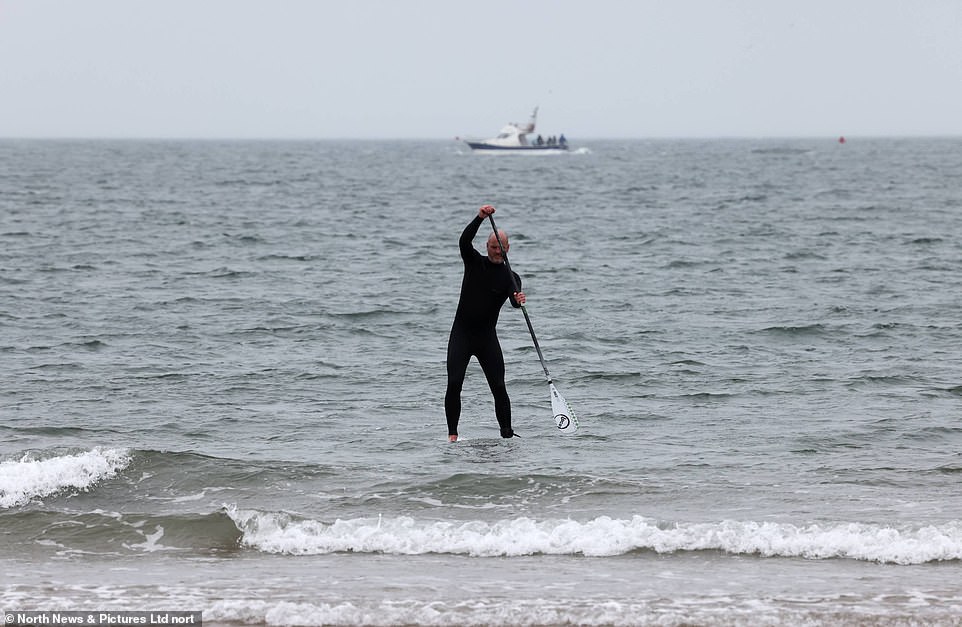 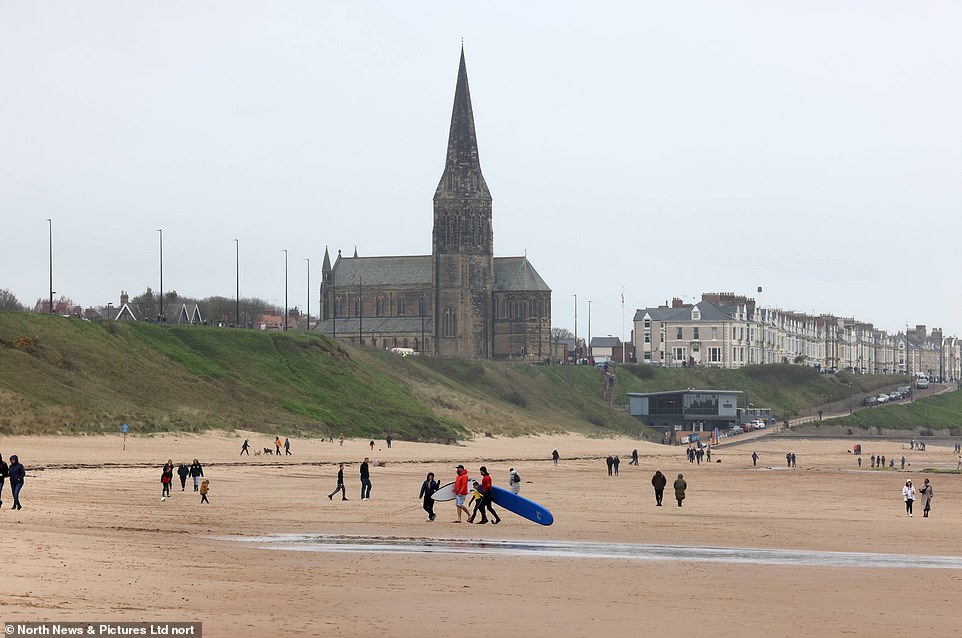 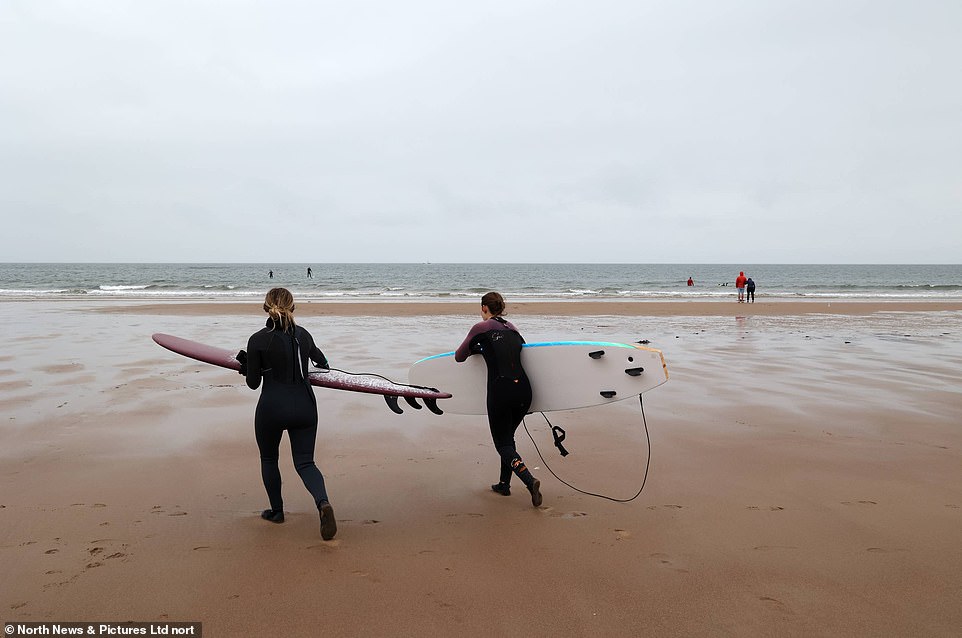 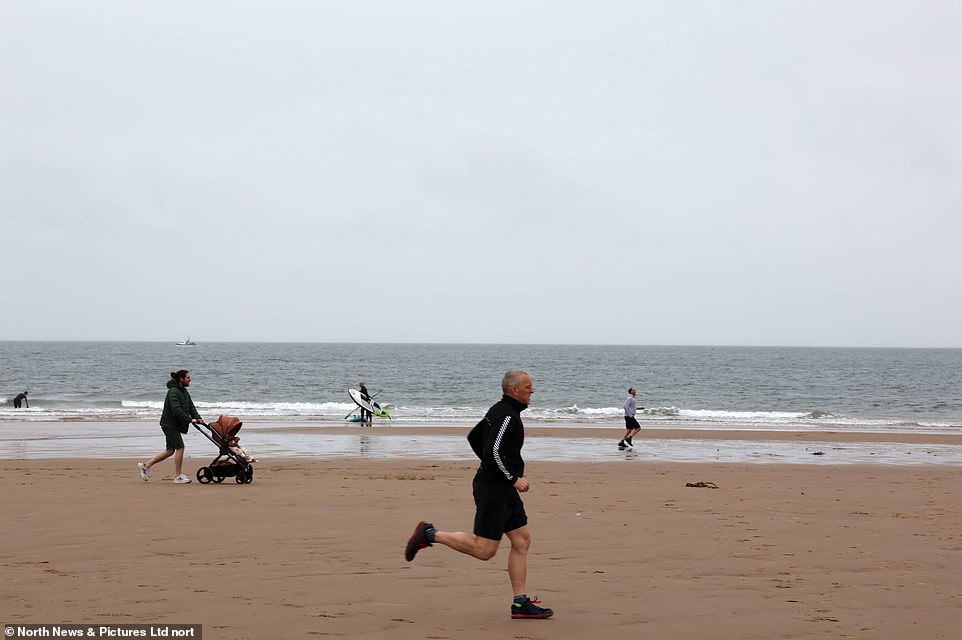 Met Office meteorologist Craig Snell said there will be a fair amount of cloud around today – but he was ‘fairly optimistic we can see the sun punch some holes through that cloud’, although there may also be showers.

Rain and cloud from the daytime will then linger through tonight, although most rain will clear by the early hours of tomorrow morning, with some heavier spells remaining in the North of England and parts of Scotland.

Tomorrow will be another very cloudy day, and there will be a wet start across the UK with some sunnier spells in the South West. It will then turn wetter and cloudier during the day, with the driest conditions in eastern areas.

Wednesday will be a day of some sunshine but heavy showers and rain, with the chance of some thundery spells in the South, and there will be moderate winds in central areas but lighter gusts elsewhere. 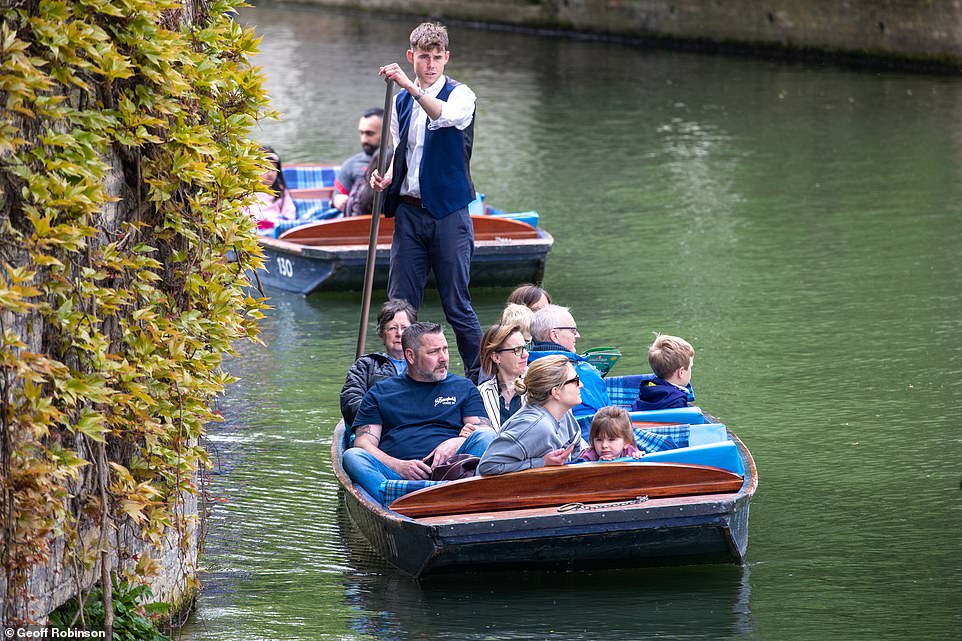 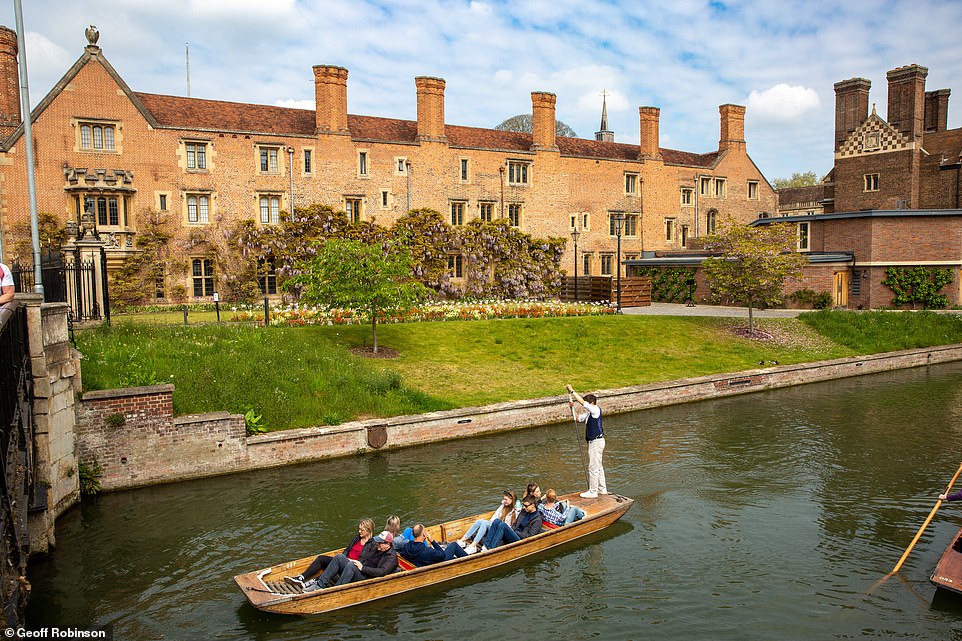 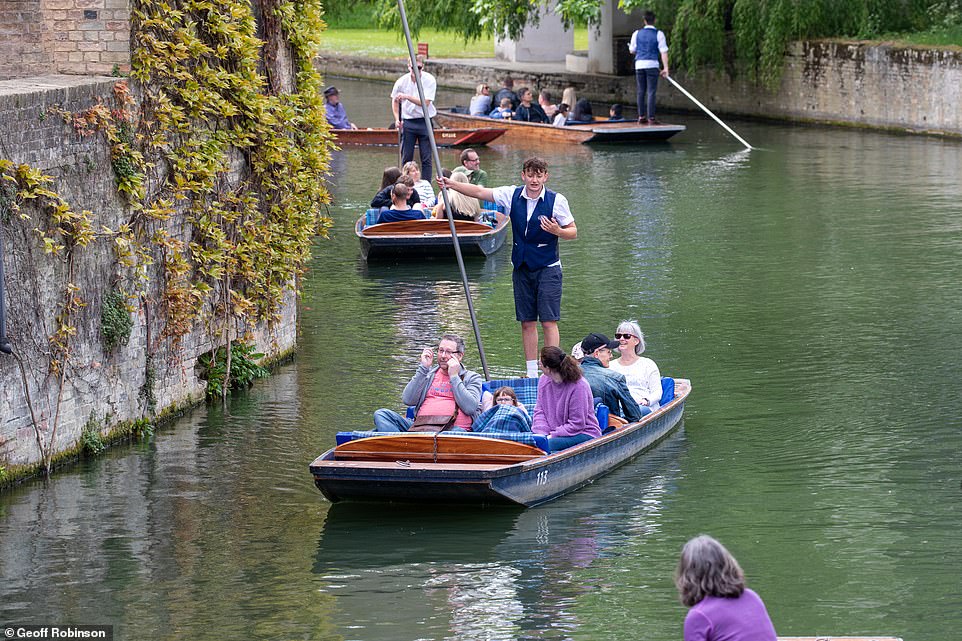 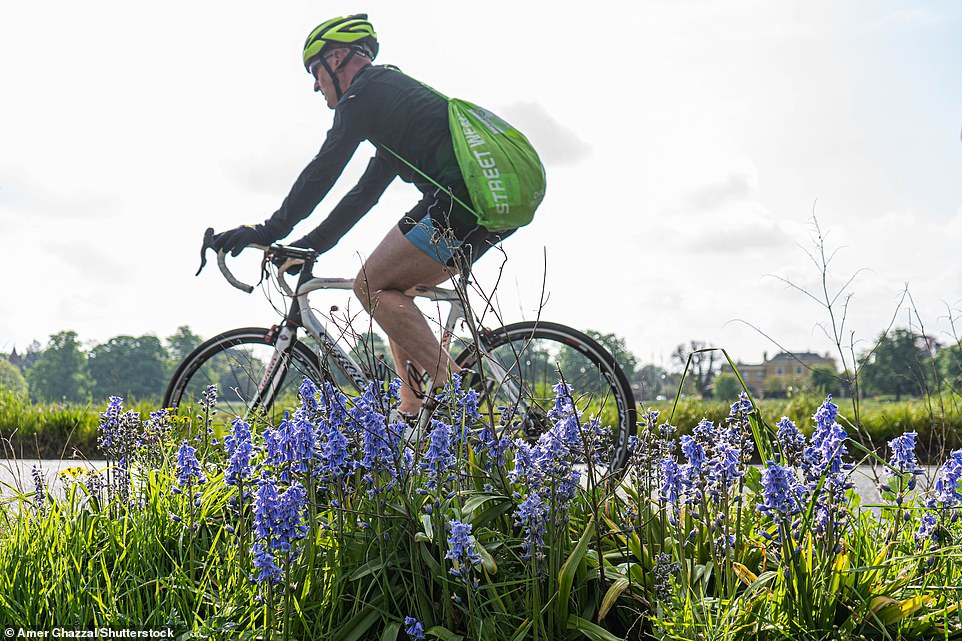 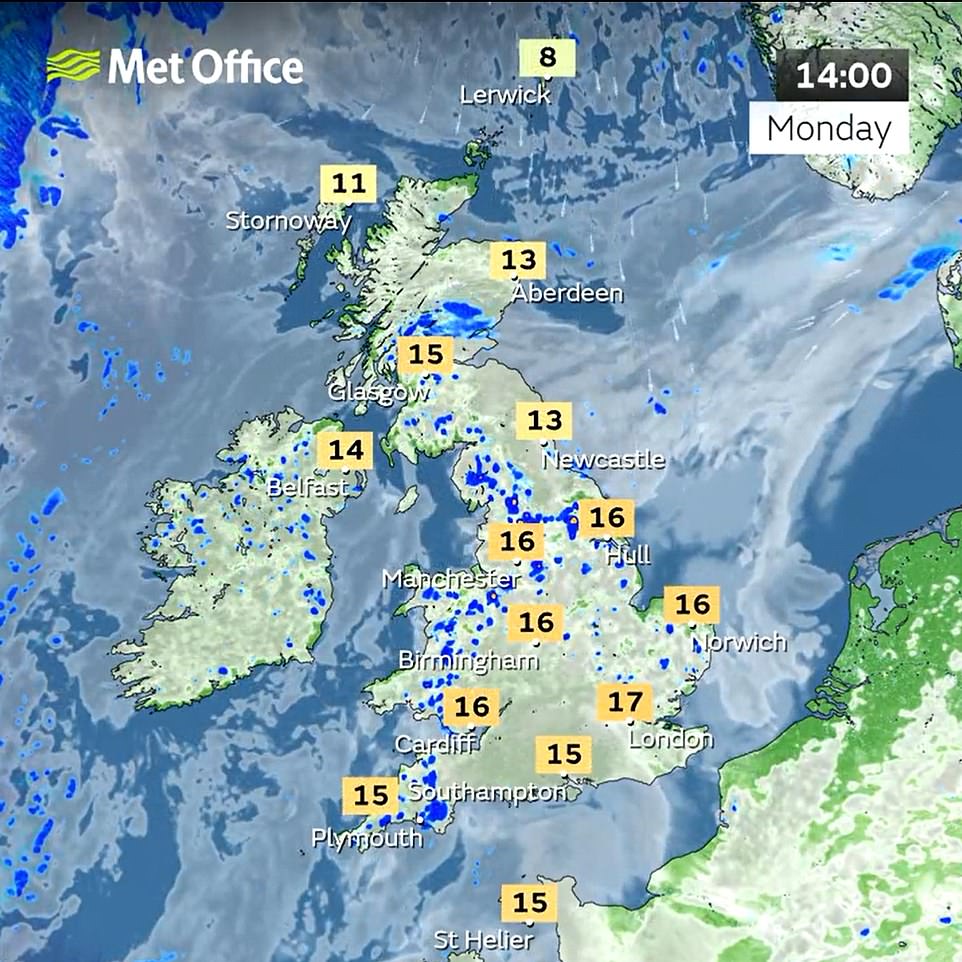 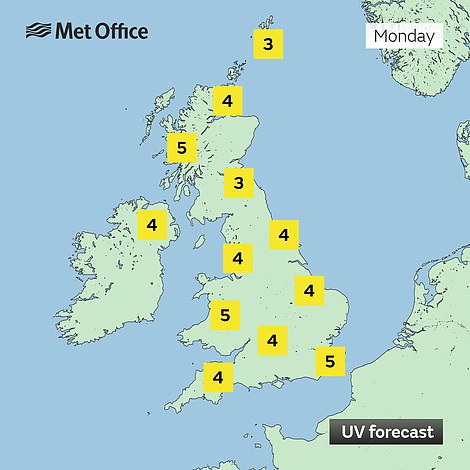 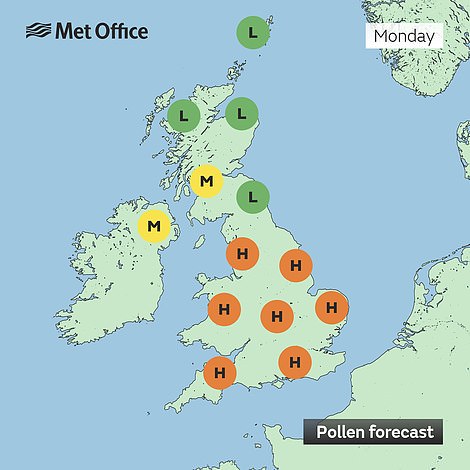 The Met Office said UV levels will be moderate across the UK today, and tree pollen counts will be high across many areas 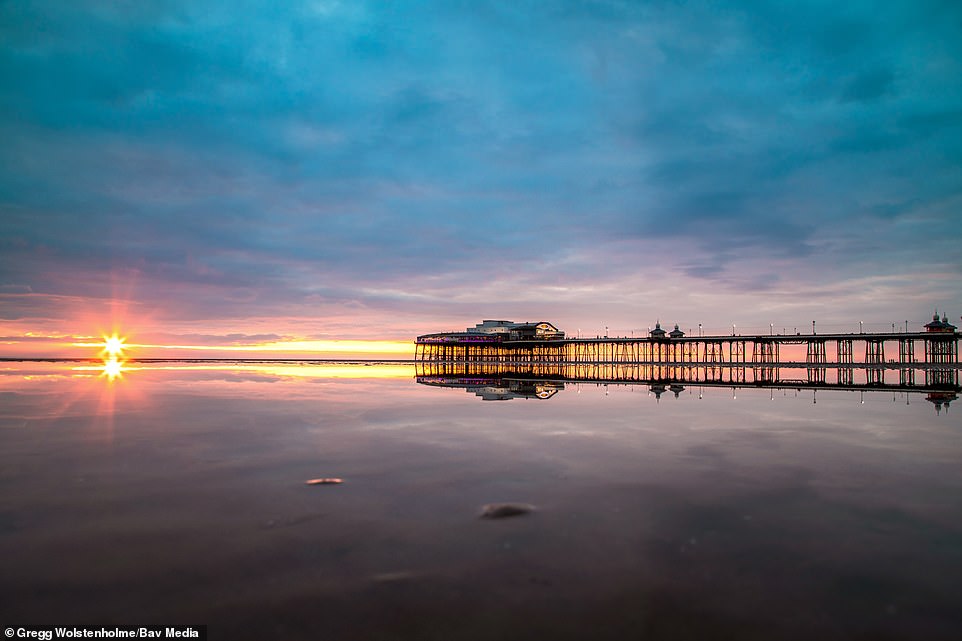 Sunset by North Pier in Blackpool, Lancashire, yesterday evening ahead of warmer weather being forecast for later this week

Conditions will then begin to improve from Thursday which will be a drier and sunnier day, especially for the south. Highs of 21C (70F) or 22C (72F) are expected on this day in the South East, as well as on Friday.

The Met Office’s Simon Partridge added: ‘This week is a funny old one, there’s a fair bit of rain and cloud around as well as sunny spells, with many areas gradually warming up until Thursday which should be the warmest day,

‘Between Monday and Wednesday temperatures will sit in the high teens and low 20s in Wales and central and southern parts of the England, while eastern Scotland could reach 19C (66F).

‘But in parts of Northern Ireland, northern England and Scotland there will be cloud and some scattered showers.

‘Thursday will see high teens quite widely across the country, parts of the South East will rise as high as 21C (70F), with an outside chance of 22C (72F) in areas where there is more sunshine.

‘So there’s a warm spell in store for many but don’t expect the wall-to-wall sunshine and blue skies we saw in April.’

The outlook for this weekend is also promising with sunshine and similar highs expected – although not to the levels of the hottest day of 2022 so far which was Good Friday, April 15, when London reached 23.4C (74.12F).

The forecast comes after last month was the latest in the string of dry Aprils, with rainfall about 35 per cent lower than average, according to the Met Office.