Shocking new images have revealed the extent of the carnage in the city of Mariupol which has endured two months of constant bombardment amid Russia’s invasion of Ukraine.

The southern port city, which Putin sees as a key strategic position in the eastern Donbas region on the Sea of Azov, has been under siege for more than eight weeks as Russian forces have conducted round the clock bombing raids and indiscriminate missile strikes on military, administrative and civilian targets alike.

Now with the war well into its ninth week, the once vibrant coastal metropolis with a pre-war population of around 450,000 has been largely reduced to rubble amid Putin’s wrath, and not a single row of houses appears to have survived the onslaught without sustaining at least some damage.

More than 90 percent of the city’s infrastructure has been severely damaged, while 45 per cent of it has been completely destroyed according to mayor Vadym Boychenko.

There are now just 100,000 people living among the bombed out ruins. More than three quarters of the pre-war population have fled and tens of thousands are believed to have died according to Ukrainian authorities.

Satellite images released yesterday of the city centre by Maxar Technologies reveal the true scale of the destruction.

Entire blocks have been completely decimated, while the Donetsk regional theatre, which once provided shelter to around 400 Ukrainian civilians until it was targeted in a direct strike by Russian missiles, can be seen totally caved in.

Other images showed rows of what appear to be freshly dug mass graves along a cemetery on the edge of the city, as well as the dilapidated exterior of the Azovstal steel plant in Mariupol’s harbour.

The factory remains the only part of the city not under total Russian control and its network of underground rooms and tunnels constitute the final stronghold of a small contingent of Ukrainian fighters, along with roughly 1,000 civilians sheltering from Putin’s bombs. 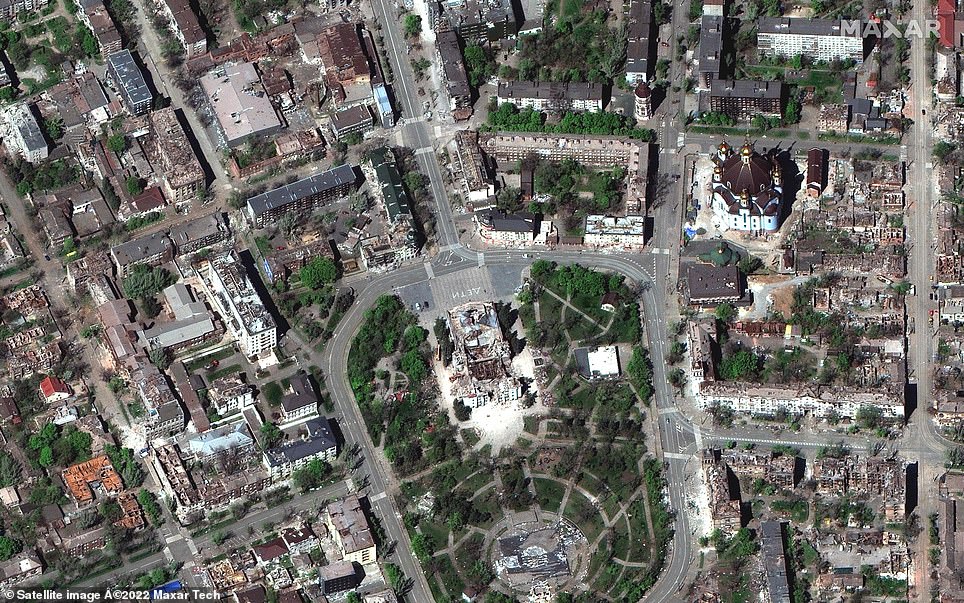 The first image taken from Google Earth shows the area around the Donetsk regional theatre in Mariupol before the war in Ukraine began. The second image, released on April 30, 2022, by Maxar Technologies, shows the same area completely destroyed following eight weeks of Russian bombardment. The theatre in the centre acted as a bomb shelter for hundreds until it was targeted in a direct strike 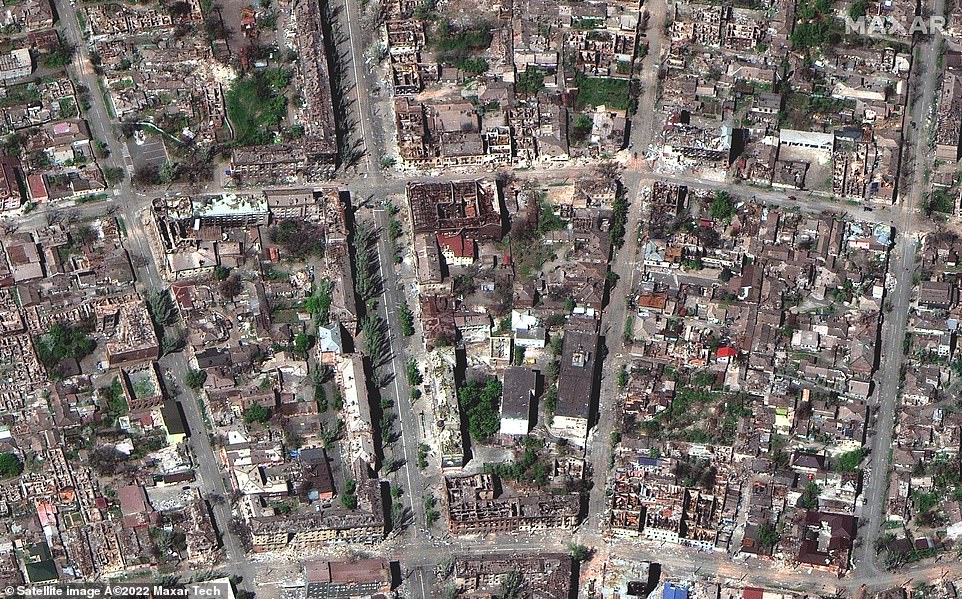 This handout satellite image released on April 30, 2022, by Maxar Technologies shows multiple street blocks with destroyed buildings in Mariupol, on the Azov Sea, on April 29, 2022, amid Russia’s military invasion launched on Ukraine 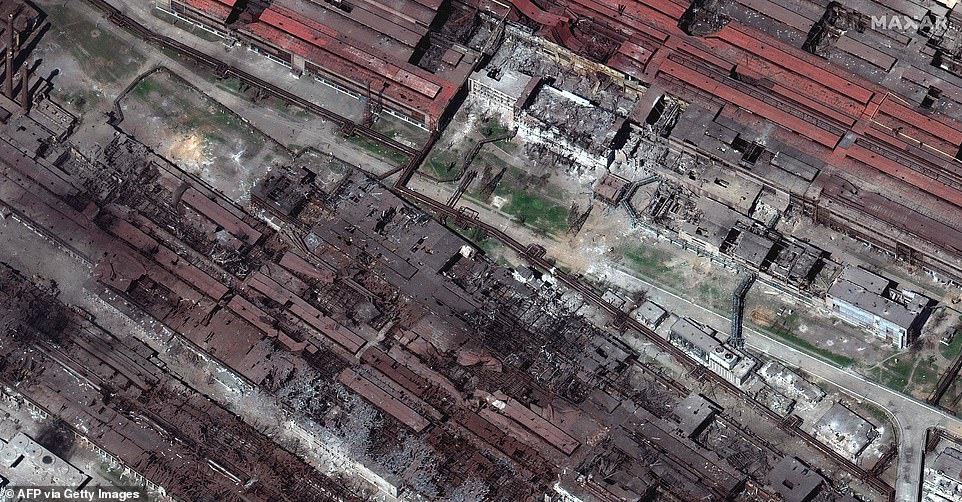 This April 30, 2022 image released by Maxar Technologies shows the Azovstal steel plant, the city’s last holdout where up to 1,000 civilians are sheltering with Ukrainian troops. Russia has continually bombed the plant, causing surface damage, but the Ukrainians are hiding in a deep network of underground tunnels 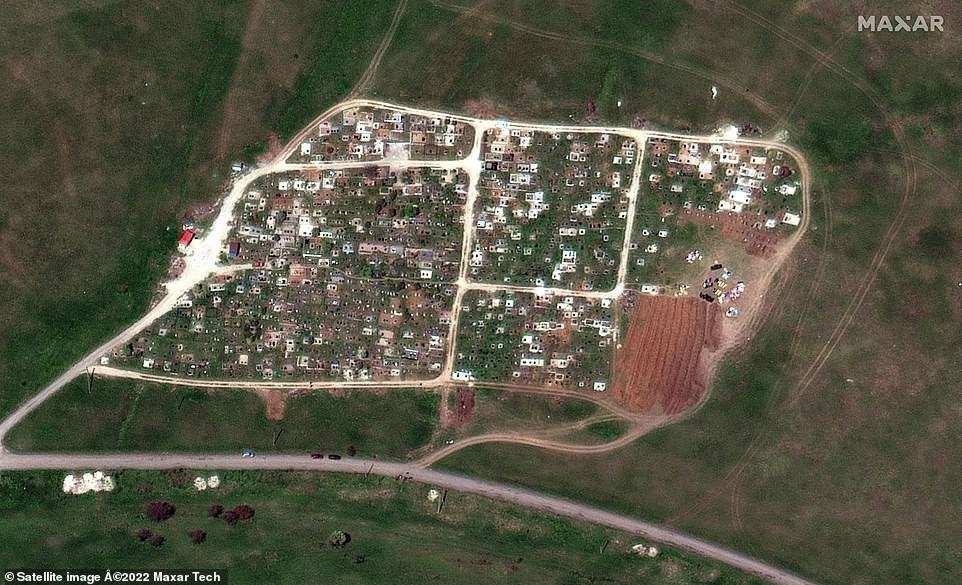 This image appears to show a large patch of freshly dug mass graves in the Vynohradne cemetery, near Mariupol, on April 29, 2022. Tens of thousands of civilians are thought to have been killed in Mariupol in the past eight weeks according to Ukrainian authorities

Russia continued its brutal bombardment of Mariupol yesterday, even as a small battalion of Ukrainian fighters attempted to evacuate a small group of desperate civilians from the Azovstal steel plant.

Putin’s forces now control the overwhelming majority of the city and are mostly focusing their airstrikes on the Soviet-era steel plant located close to the harbour, where a contingent of between 1,000-2000 Ukrainian soldiers are staging a desperate holdout alongside roughly 1,000 civilians.

Commanders of the soldiers hiding in the network of tunnels and rooms underneath the plant have repeatedly called for international aid and a safe passage for evacuation, saying the plant’s residents are barely surviving on extremely limited food and water and that there are many injured soldiers and civilians suffering without proper medical attention.

U.N. humanitarian spokesman Saviano Abreu yesterday said the world organization was negotiating with authorities in Moscow and Kyiv to organise a ceasefire.

‘There is, right now, ongoing, high-level engagements with all the governments, Russia and Ukraine, to make sure that you can save civilians and support the evacuation of civilians from the plant,’ Abreu said.

But the spokesman could not provide details of the ongoing evacuation effort ‘because of the complexity and fluidity of the operation.’ 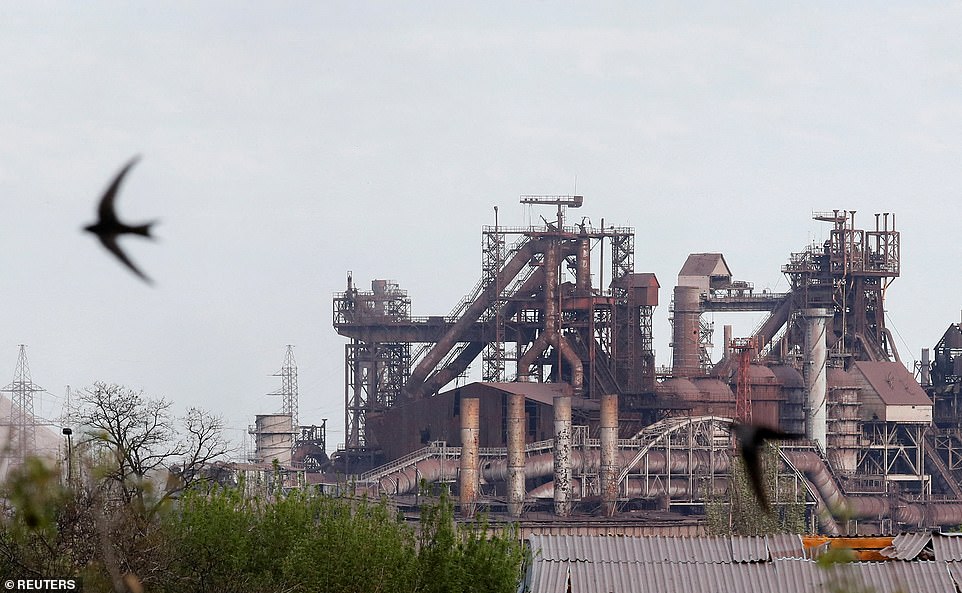 Russia’s attacks are now concentrated on the Soviet-era steel plant (pictured) located close to the harbour – the only part of the city not under occupation – where a small contingent of between 1,000-2000 Ukrainian soldiers are staging a desperate holdout alongside roughly 1,000 civilians 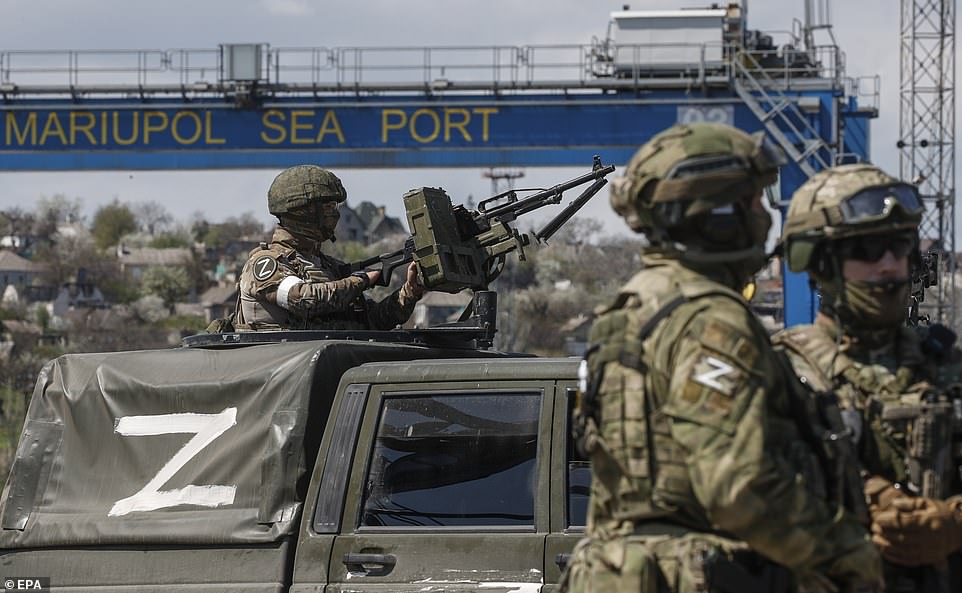 Russian servicemen guard the territory of the cargo sea port in Mariupol. Russia has continued its brutal bombardment of the southern port city, where a small battalion of Ukrainian fighters are attempting to evacuate desperate civilians from the Azovstal steel plant 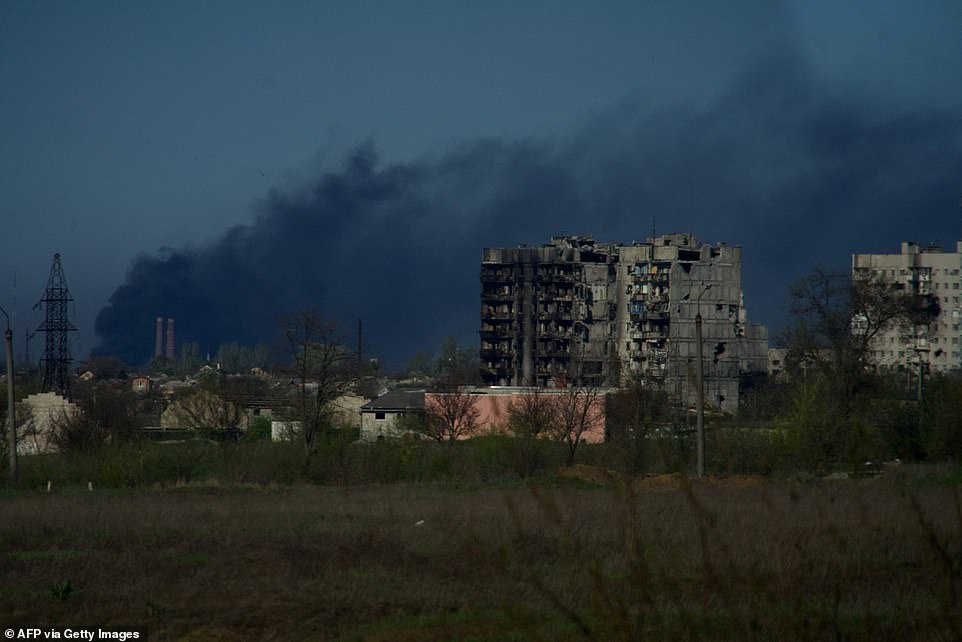 Smoke rises from the grounds of the Azovstal steel plant in the city of Mariupol on April 29, 2022, amid the ongoing Russian military action in Ukraine 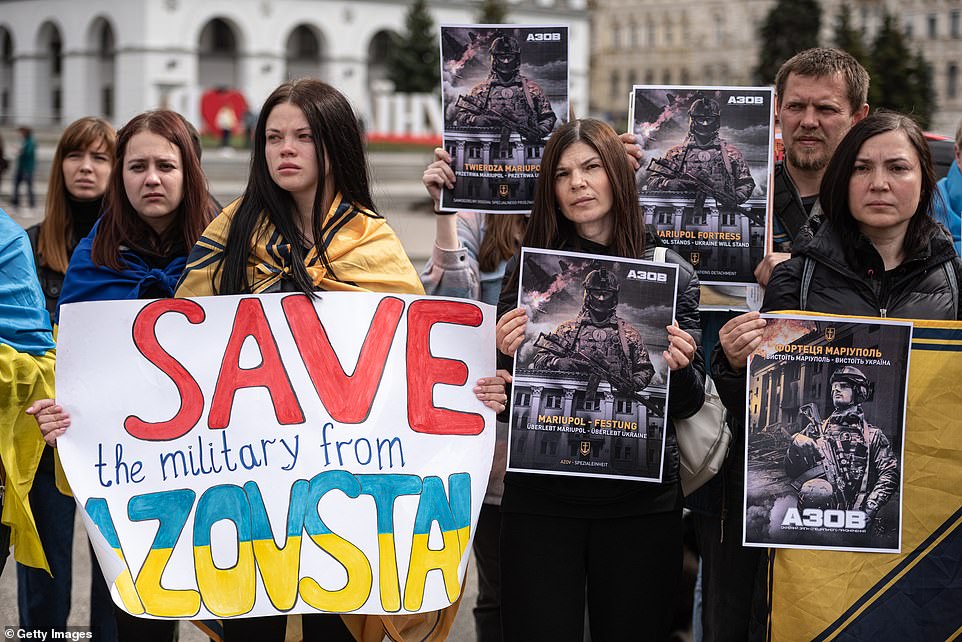 People hold banners during the demonstration in support of Mariupol defenders, on April 30, 2022 in Kyiv, Ukraine

A nine-year-old girl has miraculously survived a Russian cluster bomb attack that left shrapnel lodged in her brain. Sofia Hurmasa even summoned the strength to speak from her hospital bed: ‘Now, my dream is for the war to be over.’

Her ability to speak at all has astonished doctors after the blast in the southern city of Mykolaiv left Sofia in a coma. Shrapnel from a banned cluster bomb shattered her skull, with one piece ripping through her forehead and passing through her brain.

She underwent surgery in Mykolaiv before being brought to Lviv where medics are planning a seven-hour procedure to remove the fragment. Her mother Nina, 48, recalled how just two months ago, Sofia was posting TikTok videos of herself dancing and singing.

Now she can barely walk and struggles to compose her thoughts. Nina and Sofia were caught in a Russian bombardment as they walked to a restaurant to buy some soup. Nina saw her daughter’s favourite beanie hat had turned crimson red.

‘Sofia lost consciousness. In that moment I thought I was losing her,’ she said. Gazing lovingly at Sofia in her hospital bed, Nina seethes at Putin. ‘This man has no heart. I cannot even say his name. How can he do this to our children? 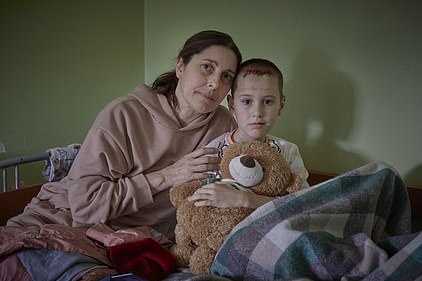 Sofia Hurmasa, 9, sits with her mother, Nina, in her hospital bed in Lviv

Ukrainian authorities have time and again attempted to evacuate civilians from the worst-hit areas in Mariupol via ‘humanitarian corridors’, during a pre-agreed period lasting typically a few hours in which both sides agreed not to launch any strikes.

But officials say Russia habitually breaks the ceasefire and conducts attacks on the corridors, killing civilians and bringing the rescue operations to an early end each time evacuations get underway.

The ferocity of the fighting, and the plight of the civilians hiding in the Azovstal factory, has stunned the world, bringing Pentagon press secretary John Kirby to the verge of tears on Friday.

‘It’s difficult to look at some of the images and imagine that any well-thinking, serious, mature leader would do that. So, I can’t talk to his psychology. But I think we can all speak to his depravity.’

A vast underground network of tunnels and bunkers has provided civilians and fighters hiding in the steel plant with relative safety from airstrikes.

But the situation has grown more dire in recent days after the Russians dropped ‘bunker busters’ and other bombs on the plant, mayor Boychenko said Friday.

Women whose husbands are trapped in the plant with the Azov Regiment said they feared soldiers will be tortured and killed if they are left behind and captured.

Yesterday, a commander of the Azov battalion trapped in the steel factory said some civilians were successfully evacuated from the plant after a planned ceasefire for 6am local time eventually got underway at 11am.

Captain Svyatoslav Palamar, the deputy commander of the Azov Regiment, said 20 civilians were evacuated and are now on their way Ukrainian-controlled territory in Zaporizhzhia, after a 12-hour wait.

‘Since 6am we’ve been waiting for the evacuation convoy to arrive, which only arrived at 6:25pm,’ Palamar said in a video statement released online.

‘We have brought 20 civilians to the agreed meeting point, whom we’ve managed to rescue from under the rubble. These are women and children. We hope these people will go the agreed destination, which is Zaporizhzhia, the territory controlled by Ukraine.’

Palamar continued: ‘As of now, the rescue operation is ongoing, conducted by the servicemen of Azov – we rescue the civilians from under the rubble.

‘These are women, children and the elderly,’ he repeated, before imploring Russian troops to respect further ceasefire arrangements.

‘We hope that this process will be further extended and we will successfully evacuate all civilians,’ he said.