Australia’s pork industry has slammed a call for school children to ‘ditch the ham sandwich’.

Leaflets from the Cancer Council telling kids to stop eating ham sandwiches have been put into public school newsletters by teachers.

‘Ditch the ham sandwich’ is the Cancer Council’s latest anti-meat edict and follows on from a previous leaflet telling children to have a ‘meat-free Monday’.

But both parents and pork producers have defended the humble ham sandwich and railed against the ‘politically correct message’.

A young boy is pictured eating a ham sandwich. Leaflets telling kids to stop eating ham sandwiches have been put into public school newsletters by teachers

‘Ham is actually a product which has been developed over the last 5,000 years and people have eaten it through the ages without any problems,’ David Bligh of Bringelly Pork and Bacon told News Corp.

‘I think sometimes these politically correct messages can go a little bit too far and not be as practical as they should be.’

A Cancer Council spokeswoman said the leaflets are part of a health campaign to get children eating better food. 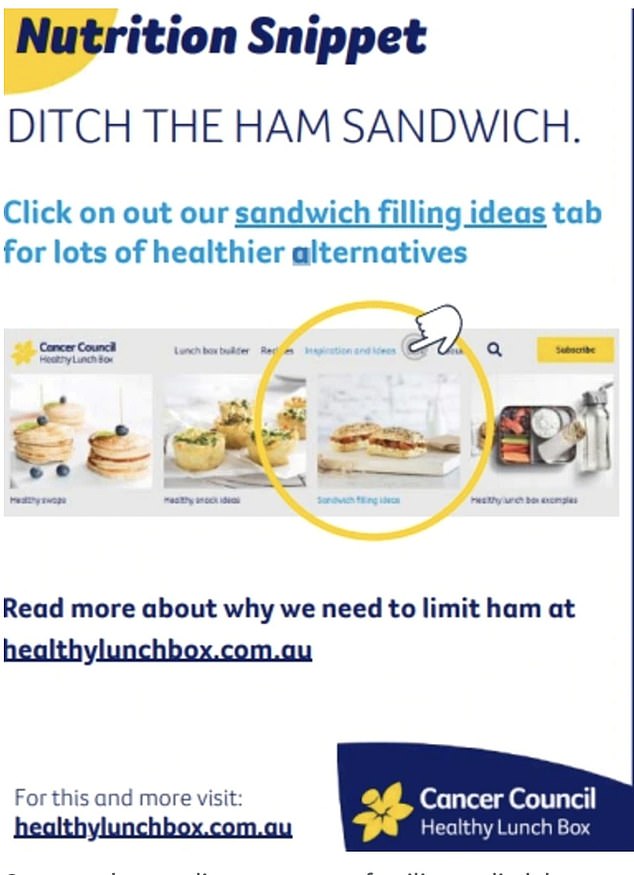 ‘Because there is strong evidence that eating processed meats and too much red meat is associated with increased risk of bowel cancer, our cancer prevention messages advise everyone to limit their processed meat consumption and cut down on red meat,’ she said.

She added that schools sent the messages to include with material sent home with pupils, were not under any obligation to do so.

Earlier this year, an Australian mum was criticised by other parents for one part of the contents in her son’s school lunchbox.

Would you put ham in your child’s lunchbox?

Tara was happy with the lunch she prepared for her child, which included a sandwich, yoghurt, grapes, biscuits with Vegemite, popcorn and red pickled onions.

But after sharing an image to the Aldi Mums Facebook group, the ham, cheese and mayonnaise sandwich was quickly critiqued by others.

One mum questioned whether the ham sandwich was safe during Australia’s hot summer, as it could lead to ‘food poisoning’ if left in the child’s bag until lunchtime.

Tara quickly responded and said she puts an ice pack alongside the lunchbox to keep the food chilled, claiming it’s ‘usually still cold’ after school.

For Tara, and a great many others, the humble ham sandwich will remain a school lunchbox favourite for a long time to come.

Some ham and bacon history

The word ham derives from the Old English ham and refers specifically to a cut of meat from the hog’s hind legs.

China takes credit for curing the first pork leg back in 4900 BC. 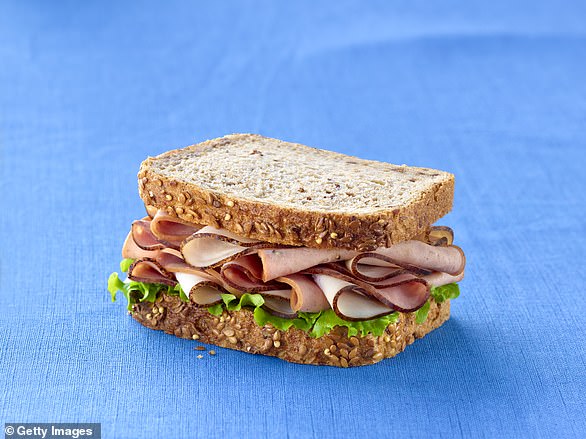 Enthusiasm for ham spread throughout ancient Europe with the Romans, who probably learned of the practice while trading with the Chinese.

Modern methods of curing bacon were invented in the mid-19th century by Irish man Henry Denny.

He began to cure bacon using ice in 1854. It made the bacon more palatable by using far less salt for preservation.