By Padraig Collins and Jesse Hyland For Daily Mail Australia

Shocking footage has emerged of the dramatic arrest of a driver who lead police in unmarked cars on a chaotic high speed chase.

The incident followed an alleged aggravated burglary, armed robbery and firearms incident in the Melbourne suburb of Melton on Sunday.

A silver SUV was involved in a crash with another car at the intersection of Melton Highway and Ryans Lane in Melbourne’s north-west on Sunday morning.

Police were told the man fled the scene of a two-vehicle collision after allegedly producing a firearm and threatening the driver of the second car, at about 9.30am.

A fugitive driver with a death wish has been arrested after a dangerous and chaotic high-speed chase in Melbourne’s north-west.

Weaving through traffic, and at one point airborne, he’s accused of holding a woman at gunpoint to steal a getaway car. @Eliza_Rugg9 #9News pic.twitter.com/e9Zwkie3Hd

The silver car is alleged to have fled the scene, while the  passenger of the second vehicle, a 63-year-old woman, was taken to hospital with non-life-threatening injuries.

A search was conducted of the area before information was received that the man had allegedly committed an aggravated burglary at an address on Old Park Drive, Melton at around 11.30am.

The man allegedly produced a firearm, threatened the occupants and stole their Kia Sportage.

The vehicle was allegedly driven in an erratic and dangerous manner, at high speeds, often crossing onto the wrong side of the road and at times leaving the road completely.

The silver SUV was then recorded by helicopter footage trying to escape from police pursuers in unmarked cars.

The vehicle became airborne at one one point as it went over a footpath.

It was also filmed crossing onto the wrong side of the road and narrowly avoiding other cars.

The SUV then crossed a median strip and went straight through the centre of a roundabout.

Police pursued the car to Bacchus Marsh before ramming it on Bond Street and arresting the male about 12.05pm.

The man fell out of the vehicle before being captured by officers wearing camouflage gear, including green military-style jackets and helmets.

A 24-year-old Box Hill man was arrested at the scene and is currently assisting police with their enquiries.

Anyone who witnessed the incident or with information is urged to contact Crime Stoppers on 1800 333 000 or make a report at crimestoppersvic.com.au. 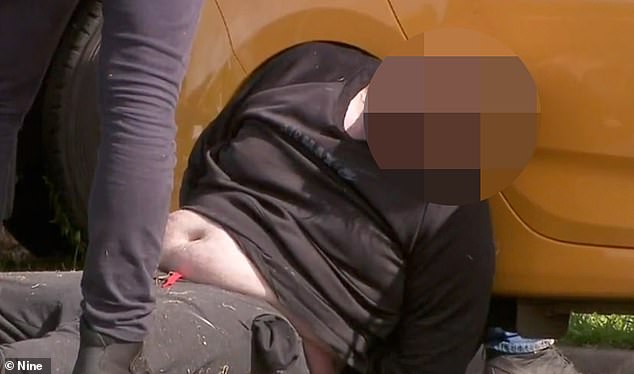