Hundreds of holidaymakers have been pictured in ‘crazy’ 3am queues at Manchester Airport as lines for check-in desks stretched ‘out the door’ – as ten million cars are expected to hit the roads today as Britain heads home after the bank holiday.

Travel experts have already warned that Monday will be ‘the busiest day of the long weekend’, with at least 3.3m individual leisure journeys alone, while thousands return from bank holiday getaways.

The chaos is also worsened by £70million of rail engineering works taking place across the UK network today.

Passengers at Manchester Airport have described the early hours scenes as ‘an absolute disgrace’ and a ‘shambles’ as the airport tries to recover ‘after the most damaging two years in the industry’s history’.

It comes after passenger numbers plummeted during lockdown, leading to financial issues resulting in more than 2,000 redundancies at the airport.

But as demand for travel surged as Covid restrictions were lifted, the airport has been left with huge staffing shortages and is frantically trying to hire hundreds of new employees to combat delays.

Hundreds of passengers pictured queuing outside Manchester Airport’s Terminal 1 at 3.26am this morning amid ongoing issues at the airport 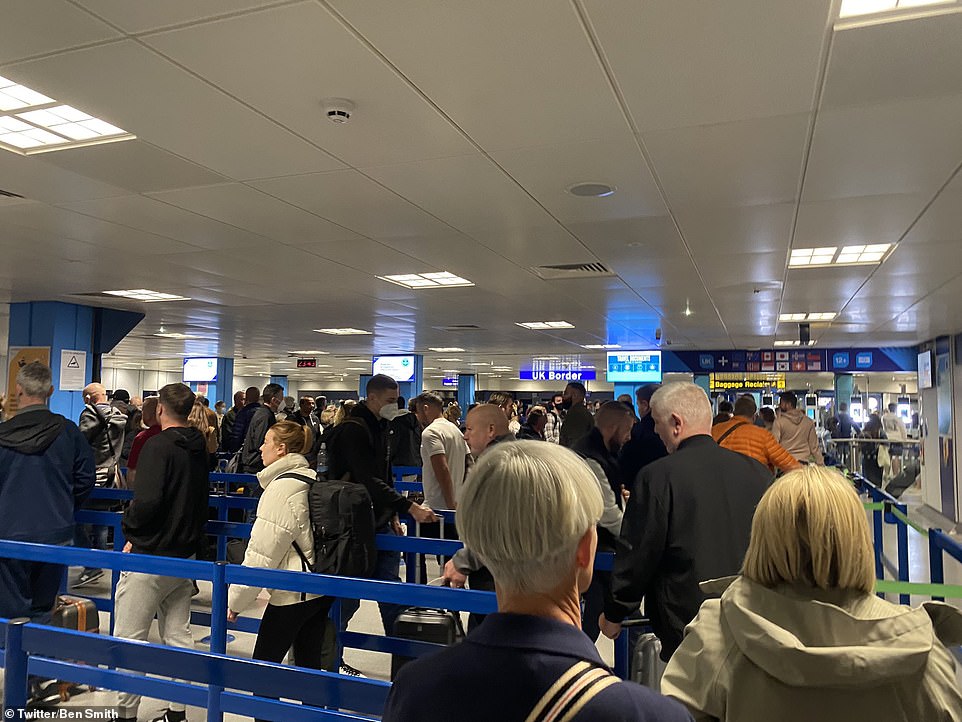 Passengers queuing to go through security, with passengers taking to social media to share their frustrations amid the staffing shortages 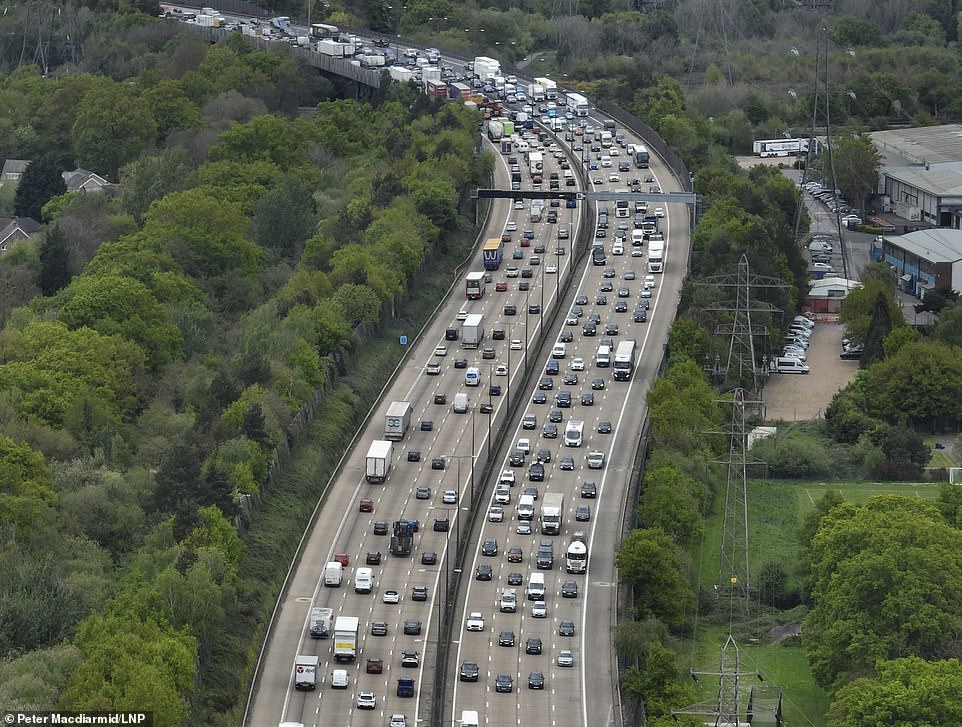 Bank holiday traffic pictured on Friday as millions travelled for leisure days out, but travel experts have warned that today will be even busier 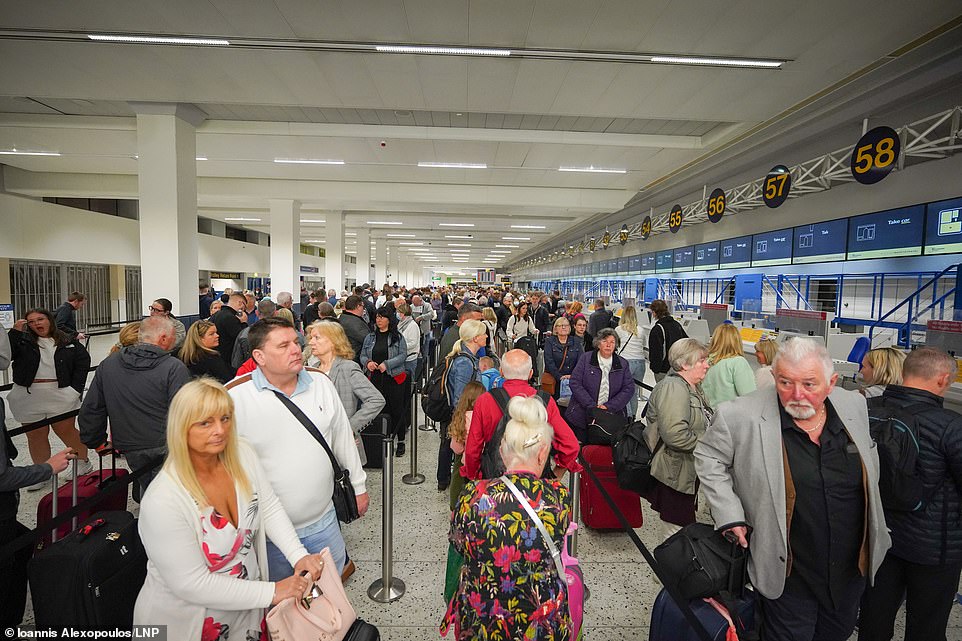 The scene at Manchester Airport at 4.03am, with hundreds of passengers queuing for check-in desks on the final day of the bank holiday 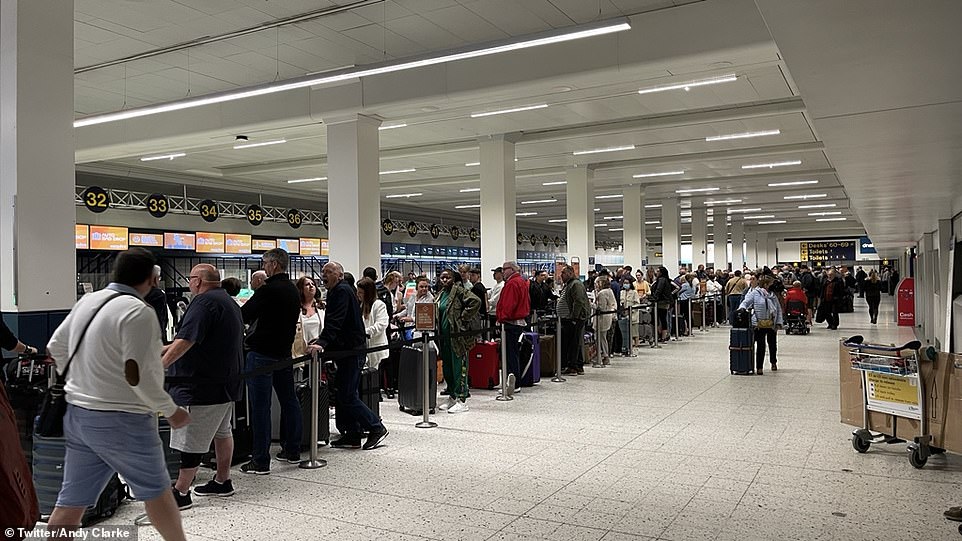 Lengthy queues at Manchester Airport, where bosses have already warned that issues and delays will stretch into the summer

And the airport has admitted it is ‘unfortunately some way short of where we need to be’ as it advises passengers to arrive three hours before their flights.

Passengers were today queuing out the door as early as 3am, with pictures showing hundreds lining up for bag drops and to get through security.

The airport’s chief executive Charlie Cornish has previously apologised for the disruption, saying: ‘The simple fact is that we don’t currently have the number of staff we need to provide the level of service that our passengers deserve.’

Meanwhile, the RAC has already warned that ‘Monday could turn out to be the busiest day of the long weekend’ on the roads, despite concerns over rising fuel prices.

And AA spokesperson Tony Rich told The Sun: ‘Although Monday’s weather will be mixed, 10 million vehicles are expected across leisure outings, normal trips and work purposes.

‘People want to enjoy themselves after Covid, and May Bank Holiday is a traditional day out. 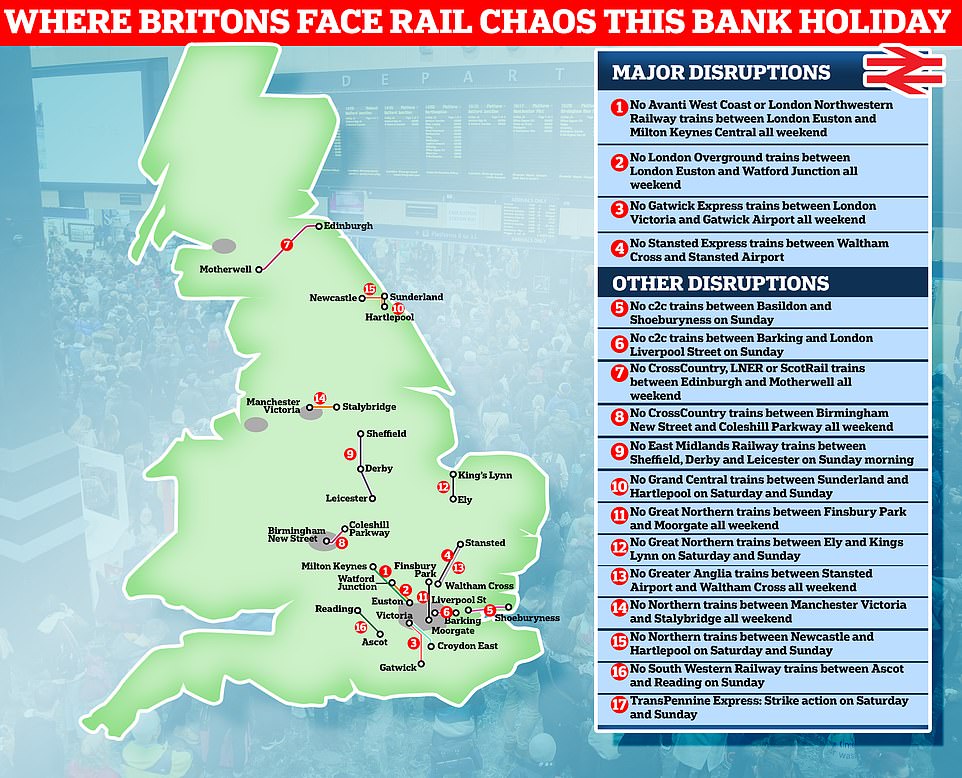 It comes after the M4 outside Heathrow Airport was brought to a standstill on Sunday afternoon after a ten-year-old girl was rushed to hospital in a life-threatening condition following a serious ‘multi-vehicle’ crash.

She remains in a critical condition today, the Metropolitan Police has said, while a further four people were also hospitalised.

Stranded motorists were pictured leaving their vehicles as an air ambulance landed on the busy motorway.

But those looking to avoid the roads are also likely to be impacted by rail engineering works continuing across the UK today.

No trains will be running on the West Coast Main Line between London Euston and Milton Keynes Central due to various works, while no Southern Rail services are running to or from London Victoria.

And passengers returning to Gatwick Airport will be affected by an amended timetable in operation between London Bridge, Brighton and the airport.

No services will run between Finsbury Park and Moorgate in London, while a bus replacement services is also in operation between Stansted Airport and Waltham Cross.

More than 95 per cent of the rail network will be unaffected by the work taking place, though, according to Network Rail.

It comes as most of Britain is set for a mild but dreary Bank Holiday Monday amid cloudy skies and showers.

Forecasters said today ‘will not be a scorcher but it will not be a washout’ with temperatures of up to 18C (64F) in England and 16C (61F) in Wales, Scotland and Northern Ireland – and rain most likely in western areas.

Today will bring a mostly dry and bright morning for many parts with some spells of sunshine, but fair-weather cloud and showers will then develop throughout the day along with a gentle breeze in coastal areas.