Chinese police officers wrestled with protesters before arresting them in cities across China last night, as demonstrators defiantly came back onto the streets to continue their historic protests against President Xi Jinping’s lockdown.

Dramatic video shows a woman screaming as she is arrested by six police officers and dragged away from a main square in Hangzhou, as Chinese officials sought to crack down on protesters in the city.

A man is seen trying to stop the police from arresting the woman by shouting at them, but two officials were seen running at the protester and screaming at him to get back.

Footage also shows a huge crowd of protesters trying to stop a group of police from arresting two men in Hangzhou. But the police officers were seen wrestling with the protesters and dragging the two demonstrators away while holding the scruff of their collars.

Dramatic video shows a woman screaming as she is arrested by six police officers and dragged away from a main square in Hangzhou, as Chinese officials sought to crack down on protesters in the city 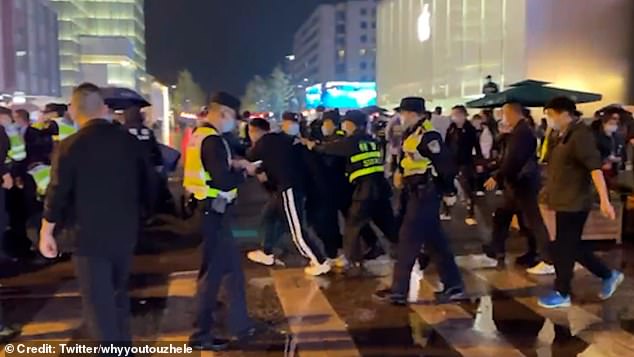 Chinese officials have ramped up their crackdown against the protests in the wake of the western media’s coverage of Xi’s rule being criticised over his ‘zero-Covid’ policy, which has resulted in millions of people living under strict lockdown restrictions for months.

Hundreds of protesters have taken to the streets since the weekend in protests fuelled by anger over the unrelenting lockdowns as well as deep-rooted frustrations over China’s political direction.

They mark the largest anti-government demonstrations China has seen since the Tiananmen Square massacre in 1989.

And despite police officers ramping up their use of violence and intimidation against the protesters, some defiantly continued in their historic demonstrations last night.

In Shanghai, around six police officers were seen surrounding one demonstrator, who is heard shouting for help. The protester is seen trying to stop the officers from arresting him, but to no avail as they dragged him away.

A number of protesters have been detained by police but it is difficult to know how many due to a crackdown on independent media outlets in China.

The police officers also used intimidation in an attempt to curb the anti-lockdown protests, with China’s major cities of Beijing and Shanghai blanketed with security today in the wake of the nationwide rallies.

Police officers have begun calling protesters who attended the demonstrations in Beijing – and if they don’t pick up, the officers go to their homes.

‘We are all desperately deleting our chat history,’ one Beijing protester who declined to be identified, said.

‘There are just too many police. Police came to check the ID of one of my friends and then took her away. We don’t know why. A few hours later they released her.’ 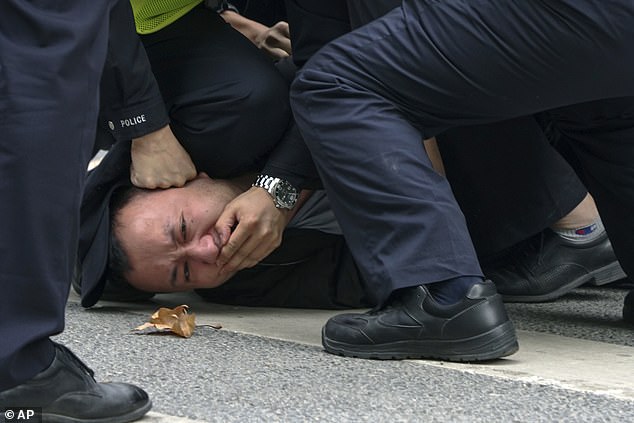 Policemen pin down and arrest a protester during a protest on a street in Shanghai, China, on Sunday 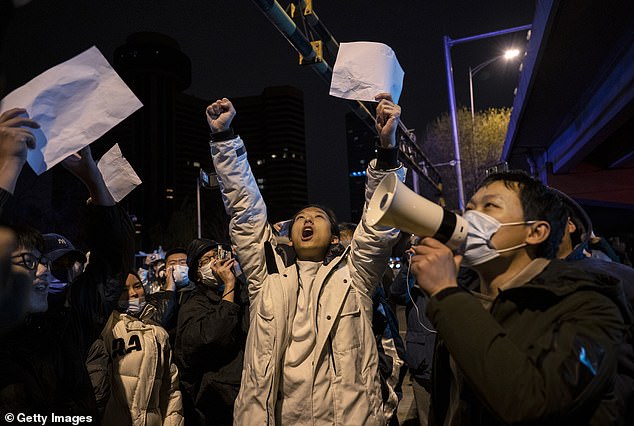 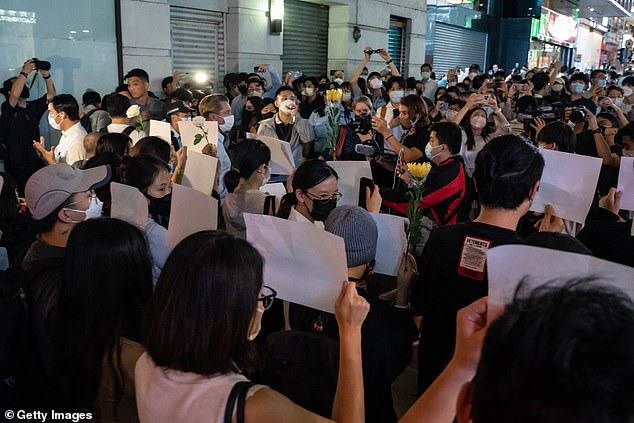 People hold sheets of blank paper and flower in protest of COVID restriction in mainland as police setup cordon during a vigil in the central district on Tuesday in Hong Kong, China.

Protests have erupted in at least seven cities over China’s strict zero-Covid rules since the weekend.

The catalyst for the protests was an apartment fire last week in the western city of Urumqi in which ten people died. Many speculated that Covid curbs in the city, parts of which had been under lockdown for 100 days, had hindered rescue and escape, which city officials denied.

In Beijing and Shanghai, police were patrolling areas where some groups on the Telegram messaging service had suggested people gather again. The police presence on Monday evening and night ensured no gatherings took place there.

In Shanghai, near a site where weekend protests saw bold calls for the resignation of President Xi Jinping, bar staff told AFP they had been ordered to close at 10:00 pm for ‘disease control’. 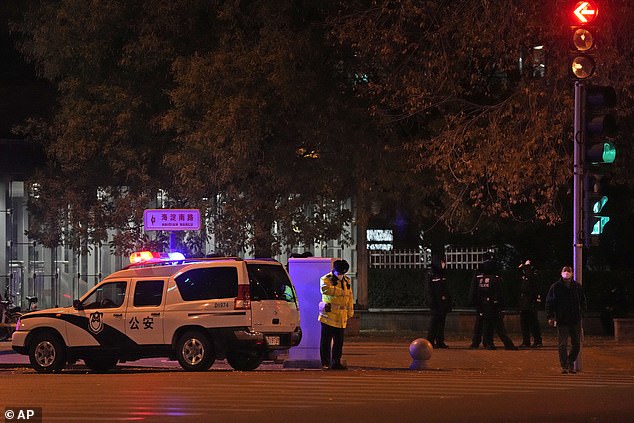 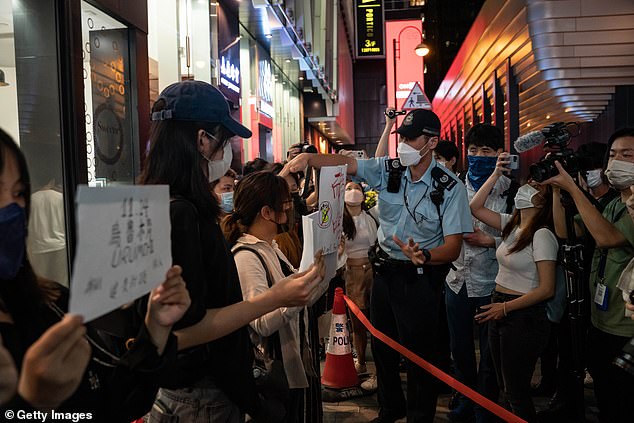 People hold signs in protest of COVID restriction in mainland as police setup cordon during a vigil in the central district on Monday night in Hong Kong, China. 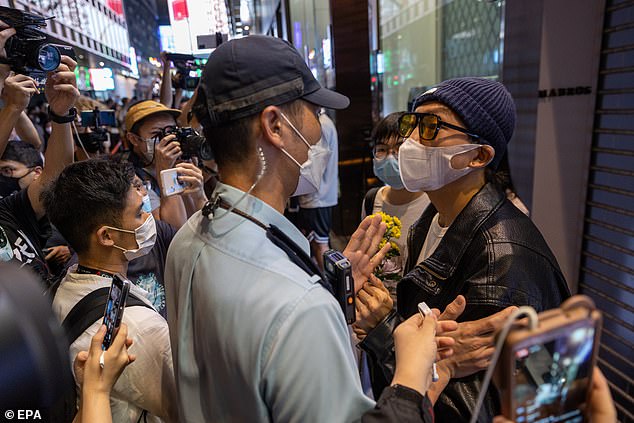 Police check mourners during a vigil for the victims of China’s zero-COVID policy and the victims of the Urumqi fire in Hong Kong, China, on Monday night

The person declined to give his name out of fear of retribution, as he was en route to a planned protest near the station, which he did not find.

Throughout the day police officers detained four people, later releasing one, with a reporter counting 12 police cars within 100 metres along Wulumuqi street in Shanghai.

‘The atmosphere tonight is nervy. There are so many police around,’ a man in his early 30s said on Monday night.

Residents said police have been asking people passing through those areas for their phones to check if they had virtual private networks (VPNs) and the Telegram app, which has been used by protesters, residents said.

VPNs are illegal for most people in China, while the Telegram app is blocked from China’s internet.

Chinese officials have also started inquiries into some of the demonstrators who had gathered at the weekend protests across the country.

In one case, a caller identifying as a police officer in the Chinese capital asked the protester to show up at a police station on Tuesday to deliver a written record of their activities on Sunday night.

In another, a student was contacted by their college and asked if they had been in the area where events took place and to provide a written account.

Elsewhere, some rallies did go ahead. In semi-autonomous Hong Kong, where mass democracy protests erupted in 2019, dozens gathered at the Chinese University to mourn the victims of the Urumqi fire.

Although largely focused on Covid curbs, protesters have occasionally vented their frustration with the ruling Communist Party and Xi, who has concentrated power in his hands over the past decade and just recently secured another leadership term.

On Sunday, a large crowd gathered in the southwestern metropolis of Chengdu chanting: ‘We don’t want lifelong rulers. We don’t want emperors.’ Anti-Xi slogans were also briefly heard in Shanghai on Sunday.

Xi had taken personal responsibility for leading the ‘war’ against COVID. Officials say the zero-COVID policy has kept the death toll in the world’s most populous country in the thousands, avoiding the millions of deaths elsewhere.

Many analysts say easing the policy could lead to widespread illness and deaths, overwhelming hospitals. A strong push on vaccinating the elderly is required before China could even contemplate re-opening, they say.

In a Tuesday editorial that did not mention the protests, the People’s Daily, the Communist Party’s official newspaper, urged citizens to ‘unswervingly implement’ zero-COVID policies, which put people’s ‘lives first,’ saying victory would come through ‘perseverance through thousands of hardships’.

‘The harder it is, the more you have to grit your teeth,’ it said.

China’s strict control of information and continued travel curbs has made verifying the numbers of protesters across the vast country challenging.

But such widespread rallies are exceptionally rare, with authorities harshly clamping down on all opposition to the central government.

Without mentioning the protests, the criticism of Xi or the fire, some local authorities eased restrictions Monday.

The city government of Beijing announced it would no longer set up gates to block access to apartment compounds where infections are found.

“Passages must remain clear for medical transportation, emergency escapes and rescues,” said Wang Daguang, a city official in charge of epidemic control, according to the official China News Service.

Guangzhou, a manufacturing and trade center that is the biggest hot spot in China’s latest wave of infections, announced some residents will no longer be required to undergo mass testing.