Boost for cancer checks: Record three million patients were referred over past year

A record-breaking three million patients were referred for cancer checks over the past year amid a post-pandemic surge.

The number has risen from 2.4million, according to NHS data. Figures also reveal that around 315,000 patients started treatment for the disease in the last year, 2,000 up on pre-Covid numbers.

Dame Cally Palmer, national cancer director for NHS England, said there were still 30,000 people who have not yet begun treatment due to the pandemic. But she added that the latest figures suggest progress is being made to diagnose patients earlier.

To meet the higher demand for cancer checks, NHS services are being expanded including one-stop shops for tests, mobile clinics and symptom hotlines.

The number has risen from 2.4million, according to NHS data. Figures also reveal that around 315,000 patients started treatment for the disease in the last year, 2,000 up on pre-Covid numbers

Charities welcomed the rise in referrals but warned of the ‘devastating impact’ of the pandemic on cancer care and urged ministers to tackle the long-term problem of NHS understaffing.

Dame Cally said: ‘We are going further and faster than ever before in our ambitions to diagnose more cancers at an earlier stage so that we can save more lives.

‘We have seen record numbers of people coming forward for checks in the last year, but we know there are still at least 30,000 who haven’t started treatment due to the pandemic, so it’s vital that we keep these referral rates high.’

Professor Peter Johnson, NHS England national clinical director for cancer, said: ‘We know the pandemic meant that at first we saw fewer patients, but in the last year GPs have been referring people for investigation in record numbers and have been working hard to make sure people with worrying symptoms can be seen. 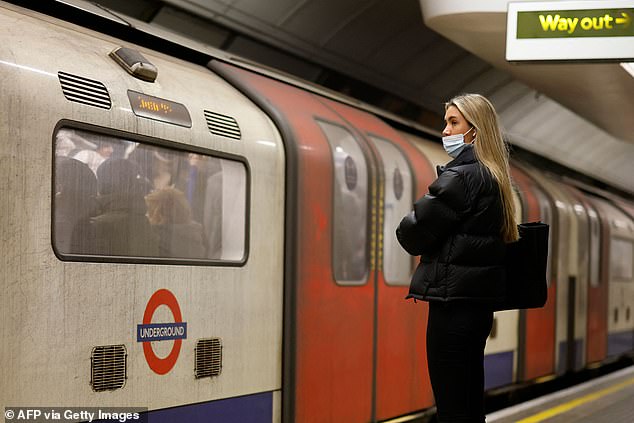 The Omicron wave also saw more cancellations of vital cancer treatments, ‘indicating the NHS is still not able to access sufficient Covid-free treatment capacity to safeguard treatments and address the backlog,’ the MPs said. A commuter is pictured  above in London during the Omicron wave

‘The NHS has continued to prioritise cancer care throughout the pandemic.’

The surging numbers come after MPs warned that Covid-related disruption mean more people will not have cancer diagnosed until it has reached a later stage, when it is harder to treat.

In a report earlier this month, the Health and Social Care Committee said three million fewer people in the UK were invited for cancer screening between March and September 2020.

And between March 2020 and March 2021, 326,000 fewer people in England received an urgent referral for suspected cancer.

Minesh Patel, head of policy at Macmillan Cancer Support, said: ‘It is reassuring to see record numbers of people coming forward with cancer symptoms for these life-saving checks.

‘However, people living with cancer are often missing out on crucial care as a result of chronic NHS understaffing.

‘To avoid putting further pressure on hardworking doctors and nurses, it’s vital the Government includes steps in the upcoming 10-Year Cancer Plan to grow the number of cancer professionals so that people living with cancer receive the quality and timely care they desperately need.’

Ian Walker, executive director of policy, information and communications at Cancer Research UK, said: ‘We know that the pandemic has had a devastating impact on cancer services and cancer waiting times were being missed before the pandemic struck. It’s very encouraging to see an increased number of people being referred for cancer checks.’