Copyright 2021 - All Right Reserved
Home » What can I do to stop my eye watering? DR MARTIN SCURR answers your health questions
Health

What can I do to stop my eye watering? DR MARTIN SCURR answers your health questions

My right eye constantly waters. I’m 87 — is this age-related?

There are several different causes for a watery eye, medically known as epiphora, but age isn’t one of them.

The front of the eye is a wet surface, and tears are constantly produced and drained away down the nasolacrimal duct, which runs from the inside corner of the eye into the nose.

That channel can become blocked as a result of infection, or inflammation in the sinuses, and this may persist even after the heavy cold, for instance, or bout of allergy, has long subsided.

There are several different causes for a watery eye, medically known as epiphora, but age isn’t one of them

One way of identifying a blockage in the nasolacrimal duct is for your doctor to apply fluorescein eye drops. Putting this bright orange (harmless) liquid into the eye should result in the dye dripping down the nostril on that side within a minute.

If that doesn’t happen, it’s a sign that the nasolacrimal duct is blocked, and this may require referral to an ophthalmologist to flush out the duct.

If the nasolacrimal duct is not blocked, then there are two other possible causes: ectropion, when the lower eyelid sags outwards, so that it is no longer touching the eye’s surface and able to act like a windscreen wiper, sweeping the tears towards the duct; or (paradoxically) dryness of the eye, as a result of the meibomian glands in the eyelids not producing enough oil because they are blocked.

The lack of oil in the tear film means the tears break down, causing weeping over the edge of the eyelid.

Ectropion is something that needs to be seen by an ophthalmologist and may involve a minor operation.

But if a lack of oil in the tears is the problem, this is something patients can treat themselves.

It involves a regular eyelid hygiene routine, using warm compresses to soften the waxy material that plugs the ducts in the meibomian glands (which line the upper and lower eyelids, just inside the eyelashes), along with massaging the glands using a cotton wool bud dipped in baby shampoo to stimulate the flow of oil from the glands.

My suggestion is that you seek the advice of your GP about the cause, in your case, and the best treatment for it.

A blood test found that I have high iron levels. I asked at my local pharmacy what they could recommend to bring them down, but they were unable to help. What should I do?

Raised iron levels may be caused by haemochromatosis, an inherited condition in which your digestive system absorbs excessive amounts of iron from food, due to a mutation in a gene that controls iron uptake.

The body has no natural mechanism for shedding excess iron, so over many years it can accumulate.

Haemochromatosis is diagnosed when the blood level of ferritin, a measure of iron stores, is above 300ng/ml (the normal range in females is 20 to 120ng/ml).

If it is haemochromatosis, treatment initially involves removing about 500ml of blood once a week (the same process as though donating blood), until iron stores are normal.

You would then continue to take this amount every few months, for the rest of your life, to stop it building up again. 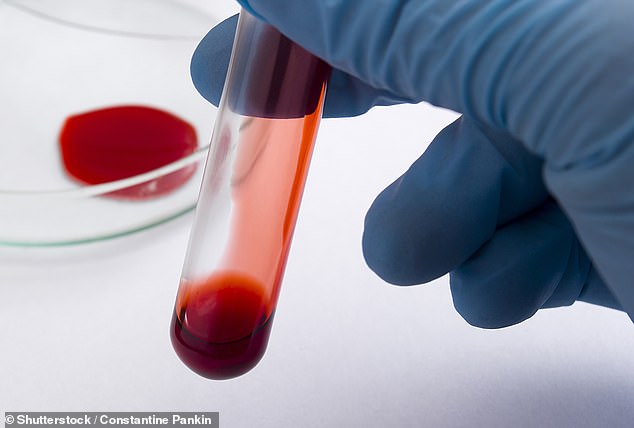 If it is haemochromatosis, treatment initially involves removing about 500ml of blood once a week (the same process as though donating blood), until iron stores are normal

Haemochromatosis can cause cirrhosis (scarring) of the liver and damage the pancreas, leading to diabetes.

Weakness and fatigue are common and it can lead to a reduced resistance to infections.

But the good news is, if diagnosed and treated early enough, complications can be prevented and life expectancy is unaffected.

I urge you to discuss your blood test result with your GP, so that if it is haemochromatosis, you can be referred for treatment.

Write to Dr Scurr at Good Health, Daily Mail, 2 Derry Street, London W8 5TT or email [email protected] — include your contact details. Dr Scurr cannot enter into personal correspondence. Replies should be taken in a general context and always consult your own GP with any health worries.

Can something as simple as hugging a cushion help reduce pre-exam nerves? According to a remarkable, recently published study, it can.

A team at Bristol University asked volunteers about to undergo an oral maths test in front of each other to rate their anxiety levels.

Some members of the group were then given a cushion which was embedded with a pneumatic chamber so that it expands and contracts, as though breathing.

They then had to rate their anxiety levels again. Those given the cushion or who meditated were less anxious than those who did nothing.

So why would the cushion work? The technique is based on haptic technology — using physical touch or sensations to create an experience.

Weighted blankets, which are used to induce calm and encourage sleep, are also a form of haptic technology.

I feel this safe and effective way of dealing with anxiety has much relevance in these tumultuous times.