Latest Government dashboard statistics show there were 1,169 virus admissions on Sunday, the latest date with data, down 21 per cent in a week. It is the second time in as many days that hospitalisations have hit a new two-month low.

The daily figure — which is becoming increasingly unreliable now that free testing has been scrapped — is the lowest since June 22 last year, when there were 11,625 confirmed cases.

Deaths also dropped by 61.6 per cent in a week to 248 today. However, last week’s total of 646 is likely to have been an anomaly, with backlogs caused by Easter Weekend.

Just 312,501 tests were reported yesterday, down 11 per cent on the 351,100 recorded the previous Wednesday. Britain was carrying out 1.5million tests a day at the peak of the Omicron wave.

It came as the Scottish Government announced self-isolation requirements will be scrapped this weekend in favour of guidance urging Scots to ‘stay at home’ if they are unwell.

It means Scotland will finally fall in line with the rules in England and the rest of the UK. Scots with symptoms of coronavirus now no longer need to take a PCR test. 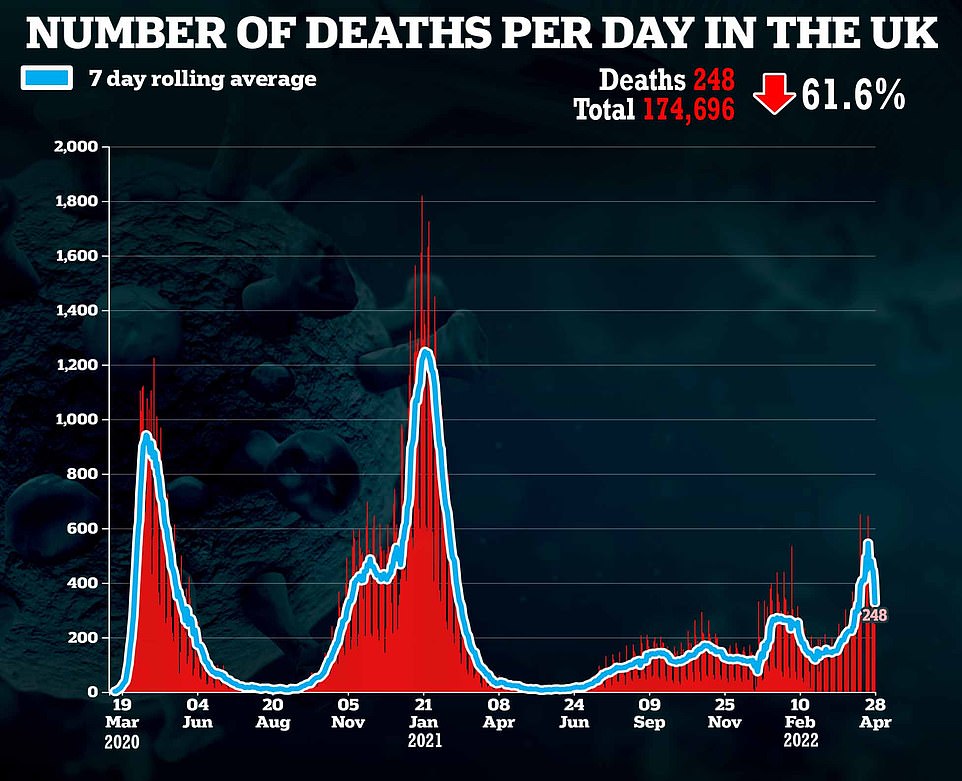 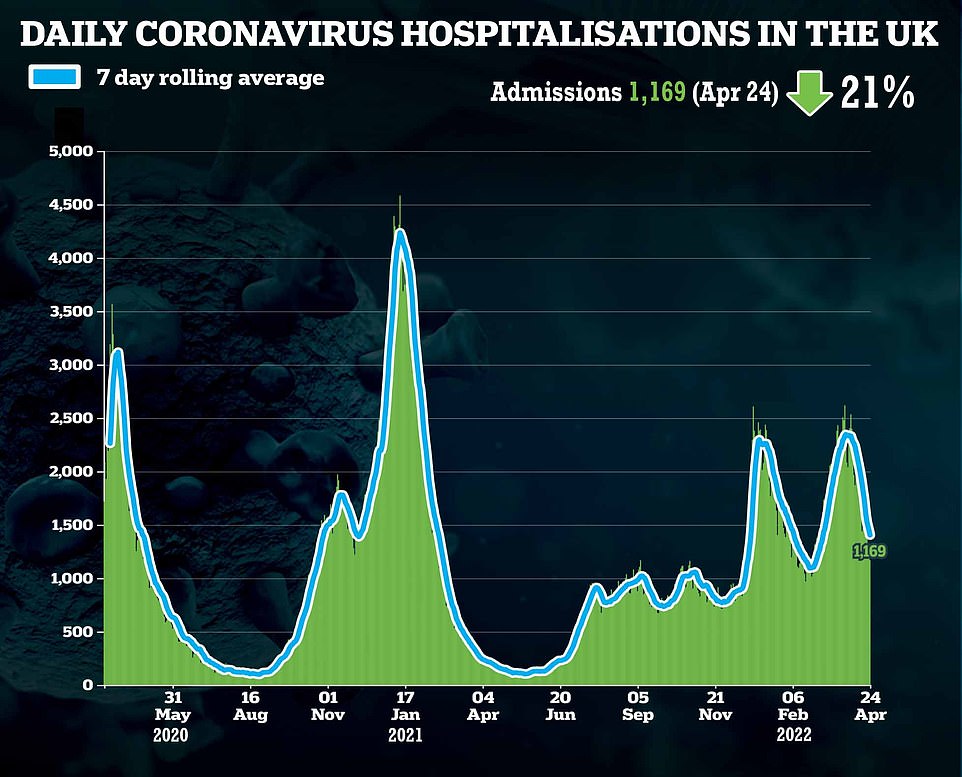 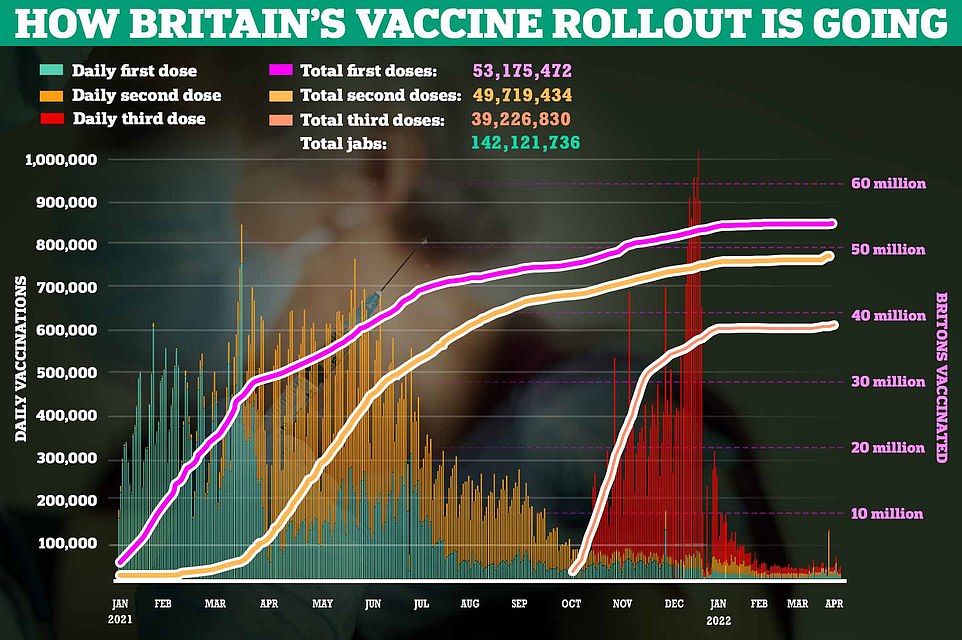 The number of sex crimes logged by police in England and Wales hit new record-breaking levels after a ‘substantial increase’ after lockdown restrictions eased.

Police-recorded sexual offences soared to their highest level on record over a 12-month period (183,587) in the year to December 2021.

Numbers of crimes recorded were lower during lockdowns but there have been ‘substantial increases since April 2021’, according to the Office for National Statistics (ONS).

The ONS said the latest statistics may reflect a ‘number of factors’, including the ‘impact of high-profile incidents, media coverage and campaigns on people’s willingness to report incidents to the police, as well as a potential increase in the number of victims’.

Mass testing in Scotland will end from April 30, with testing sites also closing and contact tracing coming to an end.

The Protect Scotland contact tracing app will be shut down ‘shortly’, according to the Government but Scots are advised to keep the programme on their phones in case it is needed again.

The NHS will be taken off an emergency footing from the end of Saturday.

Tests will continue to be available for Scots who work in the health or social care sectors, are visiting hospitals or care homes or are receiving treatment, unpaid carers or people in prison.

But the biggest change, due to come into force on Sunday, will be the end to the requirement to self isolate if coronavirus symptoms are present.

Instead, those who have a fever or who are too unwell to go about their daily business have been asked to remain home until they feel well enough.

The guidance has also been replicated for children, who have been advised to stay at home if they have a fever along with other Covid symptoms.

From May 1, the Scottish Government has advised that symptoms of the virus are considered to be: continuous cough; high temperature, fever or chills; loss of, or change in, your normal sense of taste or smell; shortness of breath; unexplained tiredness, lack of energy; muscle aches or pains; unusual hunger; headaches; sore throat, stuffy or runny nose; and diarrhoea, feeling sick or being sick.

‘Scotland’s Test and Protect programme has been one of the key interventions in our response to Covid, the success of which has been due, in no small part, to the remarkable staff and volunteers working in Test and Protect – my sincere thanks go to them,’ said Health Secretary, Humza Yousaf, on Thursday.

‘I would also like to thank the Scottish public for their commitment and willingness to engage with Test and Protect when it was required of them and helping to protect their fellow citizens.

‘However, we recognise we are now in a different phase of the pandemic. The primary purpose of testing is changing from population-wide testing to reduce transmission, to a targeted response focused on reducing severe harm of the virus.’

He added: ‘As we are now seeing a steady reduction in new Covid cases, the NHS will no longer remain on emergency footing after Saturday 30 April. But we must continue with a measured approach to support the recovery and renewal of our NHS.

‘This will require balancing capacity of the NHS and the wellbeing of the workforce to respond to increasing demands for urgent care while reducing the backlog of planned care.’

The announcement comes despite Scotland having recorded 29 coronavirus-linked deaths and 2,587 cases in the past 24 hours, according to latest figures.

It means the total number of people who have died within 28 days of testing positive for Covid has risen to 12,035.

Public Health Scotland (PHS) data published on Thursday showed there were 1,458 people in hospital with recently confirmed Covid, down 71 on the day before.

There were 23 people in intensive care with recently confirmed coronavirus, two down on the previous day.

The data showed that the re-infection rate was 14.3 per cent.

Meanwhile, latest figures from National Records of Scotland (NRS) showed, in the week to April 24, there were 121 deaths where Covid was mentioned on the death certificate, eight fewer than the previous week.

The NRS figures differ from the lab-confirmed coronavirus deaths announced on weekdays by PHS because the NRS figures include suspected or probable cases.

As of April 24, NRS data shows there have been a total of 14,455 deaths registered in Scotland where Covid was mentioned on the death certificate.