Ministers have threatened to ‘name and shame’ hospitals and fine universities which are stubbornly adhering to old Covid visiting and mixing restrictions.

Health Secretary Sajid Javid and universities minister Michelle Donelan are said to have told NHS trusts and higher education providers to get back to normal or face Government action.

Mr Javid is threatening to name and shame hospitals which still have visitor limits and social distancing in waiting rooms — measures which were relaxed last month.

University Hospitals Birmingham NHS Foundation Trust is one trust still suspending all visitors to its wards except for end of life patients — which MPs have slammed as ‘illegal’ and a breach of human rights.

The Government’s living with Covid plan also reduced Covid isolation for NHS patients from 10 days to seven with two negative tests and removed the need to isolate asymptomatic patients who are contacts of someone with the virus.

The changes are seen as crucial in freeing up more NHS capacity to tackle the pandemic-fuelled backlogs for treatment, with a record 6.2million people in England waiting for routine operations.

Universities are also under pressure to return to normality with Ms Donelan telling The Telegraph she has been ‘personally’ phoning university bosses and telling them to get back to normal.

She has promised to ‘put boots on the ground’ to investigate institutions where students have complained about a lack of face-to-face teaching, and issue fines to those failing to comply with the new Covid strategy.

It comes amid a Government-wide crackdown on institutions still clinging onto old pandemic guidance. Jacob Rees Mogg, the minister for Brexit opportunities, this week hit out at civil servants still working from home. 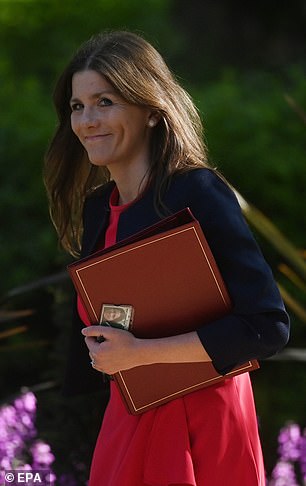 Experts have urged people not to panic as South Africa once again becomes a focal point of the pandemic amid a fresh Covid surge of new subvariants.

The world watched in horror last November as the super-infectious Omicron strain (BA.1) spread through South Africa at unprecedented speed — which turned out to be mild.

But now the country finds itself at the cusp of a fresh explosion in infections, this time due to sub-strains that appear even more transmissible and resistant to antibodies.

Covid cases have nearly quadrupled in a month nationally and hospital admissions are ticking up in Gauteng province, the former epicentre of the original Omicron wave.

Researchers on the ground in South Africa say the BA.4 and BA.5 subvariants can evade immunity and cause symptoms in people who were infected with their parent strain just months ago.

What is still unclear is whether the new wave will create milder or more severe illness — but experts tell MailOnline the former is more likely, for the UK at least.

Professor Paul Hunter, an infectious disease expert at the University of East Anglia, said Britain’s second Omicron wave, triggered by the BA.2 subvariant, will have given Britons an extra layer of immunity against severe illness.

He pointed to a pre-print which showed the combination of vaccination and Omicron infection created ‘robust protection’ against Omicron’s sub-lineages.

However, it is less clear how the latest wave will play out in South Africa, where only three in 10 South Africans have had two jabs and just one per cent have had a booster dose.

Ms Donelan said it was time for the minority of universities who seemed to be stuck in pandemic thinking and restricting teaching to do the right thing.

Her comments came as the Office of the Independent Adjudicator for Higher Education (OIAHE), reported a recorded number of student complaints last year.

In its annual report published today, the OIAHE said it had received a record 2,763 complaints from students in 2021.

Of these, 37 per cent were related to Covid with students complaining about ‘lack of access to laboratories, cancelled or changed projects, placements and study abroad opportunities’.

‘Suggesting that hardworking NHS staff are willfully ignoring national guidance is wrong and completely overlooks the complex management of risk they face day-in, day-out,’ he said.

He claimed hospital leaders want to return to pre-pandemic levels and were making progress.

‘NHS leaders are committed to doing everything they can to recover their services and know how vital it is for patients to have visitors, which is why they broadly welcomed the recent policy changes,’ he said.

‘While the NHS continues to face many challenges, such as around staffing vacancies, the sizeable maintenance backlog, and around coronavirus, it is making solid progress and is committed to going further.’

Mr Javid famously proposed to ‘name and shame’ GP surgeries that failed to meet in-person appointment targets in October last year, but later denied that was ever the plan after a huge NHS backlash.

It comes after MPs warned last week that ongoing visiting bans for patients stuck in hospital and care home residents are illegal.

Health service guidelines were updated in March to allow two visitors ‘for at least one hour per day and ideally for longer’.

However, University Hospitals Birmingham NHS Foundation Trust is is still suspending all visitors to its wards except for special circumstances like for patients at end of life.

On its website the trust says: ‘As our hospitals care for vulnerable patients and continue to be high-risk locations for Covid, our restrictions remain tighter than other locations.’ 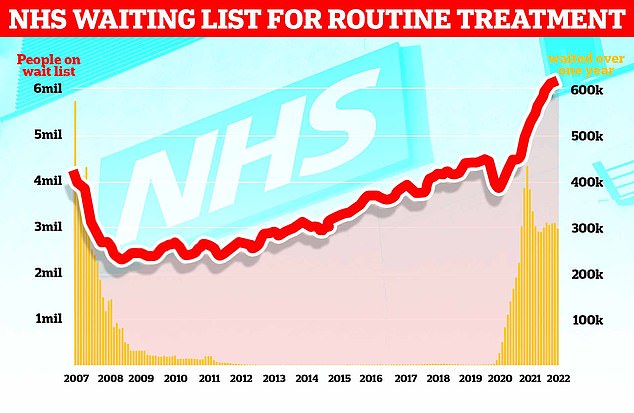 The graph shows the NHS England waiting list for routine surgery, such as hip and knee operations (red line), hit a record high 6.18million in February. The figure is 46 per cent higher than pre-pandemic levels and 1.3 per cent more than in January. Official figures also revealed that the number of patients forced to wait more than two years (yellow bars) stood at 23,281 in February, which is 497 patients (two per cent) less than one month earlier

For care homes, No10 amended strict rules on visits in England on January 31, ditching all limits on the number visitors in homes. Blanket quarantine periods for homes were also cut from 28 to 14 days.

But the industry’s regulator, the Care Quality Commission, revealed in February that it had received complaints about access at 189 care services, including blanket bans on visiting at dozens of homes.

MPs claimed Article 8 of the Human Rights Act and the Mental Capacity Act ‘could and should have protected against this situation arising’.

The latest Covid hospital data shows there were 1,198 new admissions for the virus on April 27, which marked a near-19 per cent decrease on the previous week.

Daily hospitalisations have now fallen for 22 days in a row — despite NHS leaders calling for masks and outdoor mixing to return just weeks ago.

Pressure is mounting on the UK to scrap its daily Covid stats after Ireland said it would discontinue its updates in the coming weeks.

Jacob Rees-Mogg has shared an image of an empty Cabinet Office which enraged him so much that he left notes for the civil servants who were working from home.

Mr Rees-Mogg’s zealous attempts to end WFH raised eyebrows this week, after he left notes saying ‘sorry you were out when I visited, I look forward to seeing you in the office very soon’ on empty desks at Whitehall.

However, he has now revealed the notes were prompted by his shock after discovering the Cabinet Office – which supports the Prime Minister and Cabinet – was abandoned at 11am on a weekday. 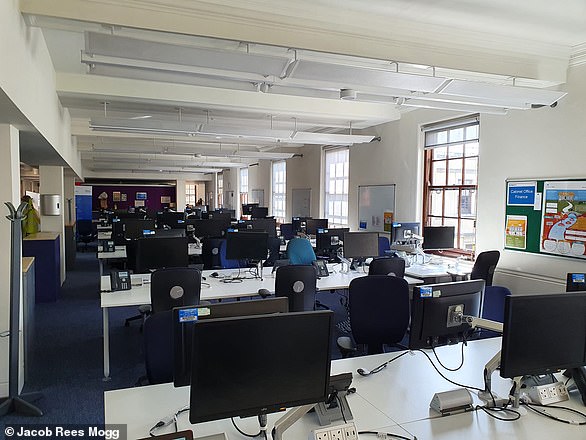 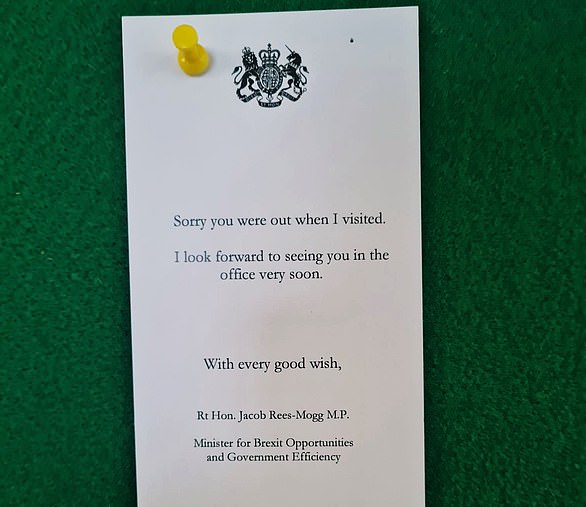 Mr Rees-Mogg, who is minister for Brexit opportunities and government efficiency, also said that some desks and computers were unused with notices on the walls that date from before the pandemic.

The MP said: ‘It looked as if the office hadn’t been used in two years. Thousands of pounds of taxpayers’ money is being spent, and either they need to be there or not. If not, we should put somebody in this property.’

Discussing a message he left on a whiteboard while on a visit to the Eurotunnel in Folkestone, Kent, he added: ‘I wrote on the whiteboard saying, ”Can we reallocate this space because you clearly don’t need it?”

Mr Rees-Mogg’s zealous attempts to end WFH, including leaving notes on empty desks, have faced criticism from some other ministers, with Nadine Dorries accusing him of a ‘Dickensian’ approach to the issue.

The Cabinet is also said to have backed away from the idea of stripping London weighting from the salaries of people who are still not yet commuting back into the capital.

Mr Rees-Mogg has written to the rest of Cabinet calling on them to issue a clear message to staff about a ‘rapid return to the office’.

‘What the minister is seeking to achieve is to do everything possible to get the civil service to return to the pre-pandemic level,’ the Prime Minister’s official spokesman said.

‘That is what he is seeking to do. That is supported by the Cabinet Secretary and obviously the Prime Minister.’