Kellogg’s today dragged the UK Government to court over rules which would ban supermarkets from prominently displaying its unhealthiest cereals.

But campaigners say the cereal-maker — whose favourites are loved by millions — could easily get around the ban by simply slashing their sugar and salt contents.

A MailOnline analysis reveals their worst-offending items can contain 14g of sugar per serving, more than a Krispy Kreme doughnut (12.6g). Other popular cereals contain just as many calories as a Mars bar (230 vs 228) and more salt than a pack of Walker’s traditional crisps (0.43g vs 0.34g).

Kellogg’s was accused of trying to ‘wriggle out’ of the Department of Health’s regulations, which come into effect in October and will only target food and drinks high in calories, saturated fat, sugar and salt (HFSS).

In-store promotion of HFSS foods will be limited when the rules come into force, meaning they will not be allowed to be featured in high-profile locations such as checkouts, store entrances and aisle ends. The regulations will also also ban multi-buy promotions.

The cereal giant — whose much-loved brands include Cornflakes and Coco Pops — argued the calculations used to judge its products were ‘wrong’ and ‘not implemented legally’ because they only consider dry bowls, glossing over all nutritional benefits of milk.

But health campaigners hit out at the claims, accusing the US-based firm of wasting taxpayers’ cash by taking the Government to court, rather than simply reducing the sugar content in its products.

Katharine Jenner, director and registered nutritionist at both Action on Sugar and Action on Salt, told MailOnline: ‘Crunchy Nut cornflakes still have two-and-a-half teaspoons of sugar in them per portion, whether you add milk or not. 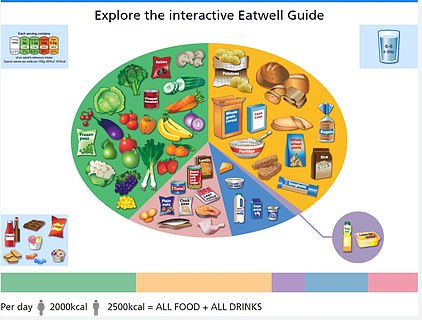 Meals should be based on potatoes, bread, rice, pasta or other starchy carbohydrates, ideally wholegrain, according to the NHS

• Base meals on potatoes, bread, rice, pasta or other starchy carbohydrates, ideally wholegrain

• 30 grams of fibre a day: This is the same as eating all of the following: 5 portions of fruit and vegetables, 2 whole-wheat cereal biscuits, 2 thick slices of wholemeal bread and large baked potato with the skin on

• Eat some beans, pulses, fish, eggs, meat and other proteins (including 2 portions of fish every week, one of which should be oily)

• Choose unsaturated oils and spreads and consuming in small amounts

‘If Kellogg’s would like to be able to promote their products, then instead of trying to convince us that adding milk makes their products healthier, they should try removing some of the salt and sugar – that will do the trick.

‘They have already managed to improve the healthfulness of some of their products by doing just that, so they know it is possible.

‘Instead of wasting taxpayer money taking our government to court, why not spend some of their own profits in investing in their customer’s health?’

This is around a tenth of an adult’s daily intake and similar to a Mars bar (228).

The NHS tells men to eat around 2,500 calories per day to maintain their body weight, while the average woman needs 2,000 calories daily.

Consuming too many calories can lead to obesity, which affects a quarter of Britons and raises the risk of type 2 diabetes, heart disease, some cancers and having a stroke.

Crunchy Nut options also topped the table on sugar, with the chocolate clusters variation containing 14g for one serving.

It was followed by the chocolate honeycomb granola version (12g), fruit and nut granola (12g) and honey and nut clusters (12g).

Britons are supposed to limit themselves to 30g of added sugar each day, as a sugar-heavy diet can lead to weight gain and tooth decay.

Sugar found naturally in milk, fruit and vegetables do not count as added sugars. The NHS says ‘we do not need to cut down on these’.

The worst offenders are around seven per cent of an adult’s daily recommended intake and all have more salt than a packet of Walkers ready salted crisps (0.34g).

The NHS advises people to limit themselves to 6g of salt a day because eating too much can raise blood pressure, increasing the risk of heart disease and stroke.

Under the Government’s next step in the war on obesity, rules from October stops HFSS foods being included in multi-buy promotions, such buy-one-get-one-free deals and ‘extra free’ deals, such as when manufacturers offer extra-large packaging and declare there is ’50 per cent extra free’.

The rules, which only apply to companies with more than 50 employees, will also stop HFSS foods from being promoted at the checkout area, queuing areas, end of aisles and store entrances.

The Government will decide whether a food is HFSS based on a nutrient profiling model (NFM) developed by the Food Standards Agency.

It scores products based on their nutritional content per 100g, with points awarded for so-called ‘A’ nutrients — calories, saturated fat, sugar and sodium — and ‘C’ nutrients — fruit, vegetable, nut, fibre and protein.

The score for healthier ‘C’ nutrients is subtracted from less healthy ‘A’ nutrients, with foods scoring four points or more considered as HFSS and subject to the Government rules.

But Kellogg’s — which is disputing the ruling in the High Court — said this formula ‘is wrong’ because it calculates a score for cereal based on it being eaten dry when nine in 10 people eat the breakfast food with milk.

Chris Silcock, Kellogg’s UK Managing Director, said: ‘All of this matters because, unless you take account of the nutritional elements added when cereal is eaten with milk, the full nutritional value of the meal is not measured.’

The company has brought the claim against the Department of Health in the High Court, with a hearing taking place today.

Lawyers for the cereal-maker told the court there has been ‘no attempt’ to acknowledge that cereals are ‘not eating in the way they are sold’.

The court will hear from the Government’s lawyers tomorrow, who argued in written submissions that the policy is ‘plainly lawful’.

HOW ARE FOODS DEEMED HIGH IN FAT, SUGAR AND SALT?

From October, food and drink that is considered high in fat, sugar and salt (HFSS) will be banned from in-store promotions under plans to tackle soaring obesity rates.

Food will be deemed HFSS based on the nutrient profiling model (NPM), which was developed by the Food Standards Agency for broadcasting regulator Ofcom, which uses the model to regulate the foods advertised to children.

It scores products based on their nutritional content per 100g, with points awarded for so-called ‘A’ nutrients — calories, saturated fat, sugar and sodium — and ‘C’ nutrients — fruit, vegetable, nut, fibre and protein.

The score for healthier ‘C’ nutrients is subtracted from less healthy ‘A’ nutrients, with foods scoring four points or more considered as HFSS and subject to the Government rules.

If a food product scores 4 or above or a drink product scores 1 or above it will be considered less healthy and therefore HFSS, meaning it falls under the Government’s new rules.

Professor Gunter Kuhnle, an expert in nutrition and food science at the University of Reading, told MailOnline that the nutritional score Kellogg’s cereals receive would ‘of course be more relevant’ if it included how the cereal is eaten.

But because most cereals are eaten the same way — with milk — ‘it doesn’t really matter’ if this is factored in, he said.

Professor Kuhnle noted that the UK’s focus on reformulating food has driven down salt and sugar levels for Britons, while they remain much higher in other European countries and the US.

He added: ‘I think it is important that consumers are aware that a lot of cereals contain a lot of sugar — they’re often seen as “healthy” because of their fibre content or fortification with vitamins, but that doesn’t really offset the sugar content.’

Caroline Cerny from the Obesity Health Alliance, accused the firm of a ‘blatant attempt’ of trying to ‘wriggle out’ of the new regulations.

She said: ‘It’s shocking that a company like Kellogg’s would sue the Government over its plans to help people be healthier rather than investing in removing sugar from their cereals.’

‘Restricting the promotion and advertising of less healthy foods is an important part of the cross-Government strategy to halve childhood obesity by 2030, prevent harmful diseases and improve healthy life expectancy, so we can continue to level up health across the nation.’

Latest figures show 28 per cent of adults in England are obese, while one in three children are overweight or obese by the time they leave school.

The NHS spends more than £6billion per year treating obesity-related health problems and the cost is set to rocket to £9.7billion by 2050. Obesity is also the second biggest cause of cancer in the UK.

The Prime Minister announced a crackdown on obesity in 2020 after a near-fatal bout of Covid which he attributed to being overweight.

As well as placing promotion bans on HFSS foods, new laws will ban junk food giants from advertising online and before 9pm on TV by January 2023.

And a rule came into effect earlier this month requiring restaurants, cafes and takeaways with more than 250 staff to list calories on their menus.

And through the NHS, Britons can now get access to apps as well as free or discounted membership to gyms and programmes such as Weight Watchers to help them shed weight.

Obesity costs the NHS more than £6 billion a year and is the second biggest cause of cancer in the UK.

In response to MailOnline’s analysis, a Kellogg’s spokesperson said: ‘Kellogg supports the government’s Obesity Strategy and work to tackle obesity.

‘We share the Government’s commitment to helping people live healthier lives as demonstrated by our work to reduce sugar and salt in our cereals and provide clear labelling.

‘By the end of the year, over half of all our cereals will be assessed as non-HFSS, including four out of our five top selling cereals (Corn Flakes, Rice Krispies, Coco Pops, Special K) and all of our children’s cereals will be non-HFSS by 2023.

‘Calculating cereals as consumed with milk would mean some cereals pass, like Fruit n’ Fibre, and some will continue not to, like Crunchy Nut Granolas.

‘This isn’t about making a judgement call on our food. It is about ensuring that the formula being used reflects the accurate nutritional value of how they are eaten.

‘Almost always, cereal is eaten with milk and that’s how we believe they should be measured – just as most of us eat them.’