Dr Anthony Fauci has performed his latest u-turn by insisting the US has not left the pandemic stage of the COVID outbreak – just hours after saying that it had.

The White House COVID tsar claimed his remarks from Tuesday night – which were taped and reported verbatim – had been ‘misconstrued’ in a subsequent interview Wednesday.

‘We certainly can’t say the pandemic is over. It is not over,’ Fauci, top medical advisor to President Joe Biden, told CBS News Wednesday afternoon.

Fauci – famed for his flip-flops on issues including masks – did not comment further on how his earlier remarks had been misconstrued – even though they appear to directly contradict his ‘correction.’

He instead clarified that the COVID threat in the U.S. was not as ‘acute and accelerated’ as it was earlier in the pandemic and the nation had reached a new ‘decelerated and controlled’ phase of the pandemic over the past several months.

‘That does not mean we are out of the woods,’ he said, adding that the number of COVID positive cases is starting to ‘creep up’ again.

‘We are certainly right now in this country out of the pandemic phase,’ he said.

Dr. Anthony Fauci (pictured Tuesday), has flip-flopped on his pandemic guidance once again, now alleging the U.S. is not in the clear to return to a state of pre-virus normalcy 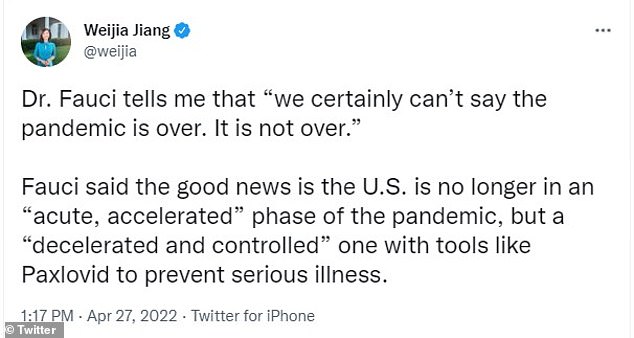 Facui said Wednesday afternoon ‘we certainly can’t say the pandemic is over’ in America, despite claiming Tuesday night that it was

Fauci on Wednesday urged Americans to remain on guard, warning citizens should be vigilant and prepared for surges and new COVID variants, should they arise.

He also stressed the U.S. ‘needs to avoid another spike in hospitalizations.’

Despite his warnings – a complete turn from his Tuesday remarks – Fauci noted how improved treatments and vaccines have put the U.S. in a much better position than other countries, such as China and Hong Kong, that continue to deal with serious virus situations.

He also pointed pointed to Paxlovid, an antiviral medication developed by Pfizer that is being used to treat COVID, claiming he believes it will make a huge difference in the battle against the virus once it becomes readily accessible.

The pill designed to keep high-risk COVID patients out of the hospital, reducing their risk of serious illness by as much as 90 percent. 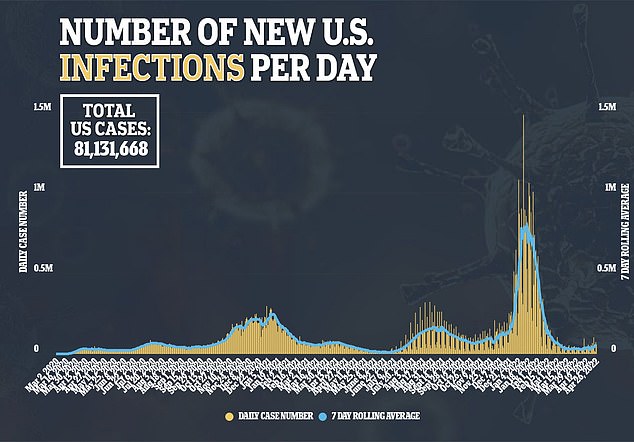 America is currently recording 54,840 daily COVID infections, a 45 percent increase over the past week – but more than 90 percent lower than the virus’s peak of 800,000 per day 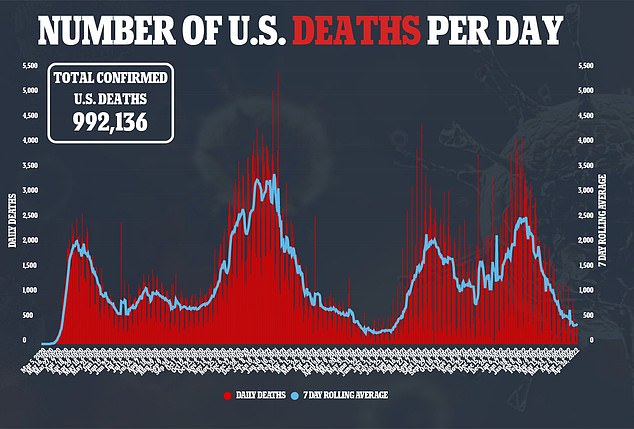 Daily death totals have dropped 14 percent over the past week, to 363 per day 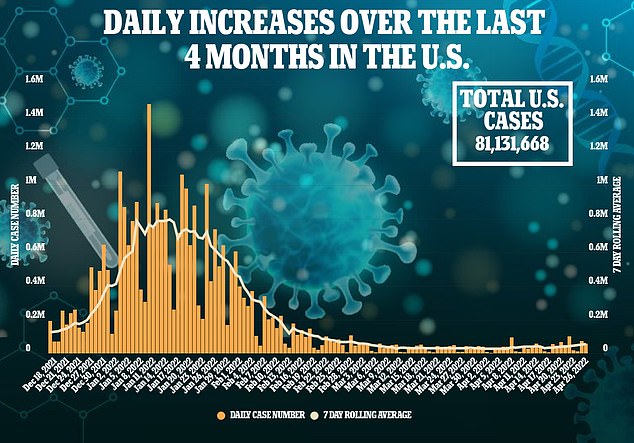 Fauci on Tuesday declared the U.S. was ‘out of the pandemic phase’ of COVID as cases and hospitalizations continue to plummet.

The immunologist, who continually lobbied for draconian mask and vaccine measures for the last two years, said ‘we are at a low level right now.’

But, he cautioned the virus cannot be stamped out completely and long-term vaccination programs may need to continue on a yearly basis.

‘So, if you’re saying, are we out of the pandemic phase in this country, we are. What we hope to do, I don’t believe — and I have spoken about this widely — we’re not going to eradicate this virus,’ Fauci said.

‘If we can keep that level very low, and intermittently vaccinate people — and I don’t know how often that would have to be.

‘That might be every year, that might be longer, in order to keep that level low. But, right now, we are not in the pandemic phase in this country.

‘Pandemic means a widespread, throughout the world, infection that spreads rapidly among people. So, if you look at the global situation, there’s no doubt this pandemic is still ongoing.’ 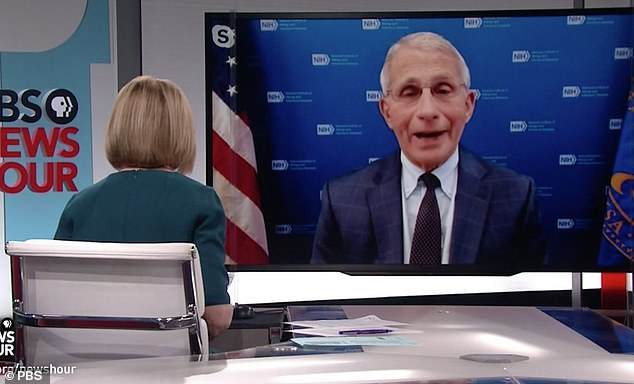 Fauci, whose comments were buried at the end of his PBS NewsHour interview (pictured), caused some confusion Tuesday by saying the ‘pandemic phase’ was over at home but ‘is still ongoing globally’

Fauci, whose comments were buried at the end of his PBS NewsHour interview, caused some confusion by saying the ‘pandemic phase’ was over at home but ‘is still ongoing globally’.

Health experts questioned his claim, pointing out he appeared to have bungled his choice of words and should only have said ‘US is in a phase of lower hospitalization rate’.

America is currently recording 54,840 daily COVID infections, a 45 percent increase over the past week – but more than 90 percent lower than the virus’s peak of 800,000 per day. Daily death totals have dropped 14 percent over the past week, to 363 per day.

The Centers for Disease Control and Prevention (CDC) also said Tuesday nearly 60 percent of Americans have been infected with COVID.

Officials cautioned this data does not mean those Americans have immunity against the virus because of their prior infections. 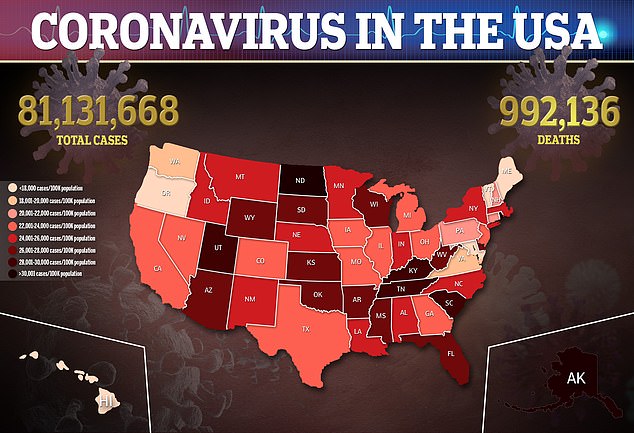 COVID restrictions have been lifted almost everywhere in America. One of the few existing mandates left is in New York City, where residents are still required to wear masks on the subway, public busses and at the airport.

Children under five years of age in the New York City public school system are still subject to ‘close-contact restrictions’ including mask wearing, a bizarre break from the rest of the city where there is no indoor mask mandate even as medical experts and virologists widely agree that the risk of children becoming seriously ill or dying from Covid is extremely low.

While children are less likely than adults to be hospitalized or to die from COVID, the CDC reported on Tuesday that in the United States, 475 children under the age of five have died from the disease.

There is still no vaccine for this age group meaning the pandemic won’t be over until it becomes available, which could be several more months.

The federal government’s nationwide mask order for public transit, commercial flights and transportation centers was dismissed by a federal judge earlier this month.

The CDC also revised its face-covering guidance in February, recommending that indoor masking only remain for communities thought to be at high risk for Covid, and mask mandates at large public gatherings such as sporting events are no longer in force.

A simple X-ray can predict your risk of developing or dying from heart disease...

Going vegan lowers the risk of colorectal cancer in men by more than a...

Men can reduce risk of bowel cancer by 20% if they stick to diet...