Copyright 2021 - All Right Reserved
Home » Fake versions of FlowFlex and iHealth at-home Covid tests are being sold in the US, FDA warns
Health

Fake versions of FlowFlex and iHealth at-home Covid tests are being sold in the US, FDA warns

Fake versions of FlowFlex and iHealth’s at-home rapid Covid tests that cost up to $9.99 each are being sold in the U.S., health officials warn.

Investigators from the Food and Drug Administration (FDA) raised the alarm over the tests after finding they were ‘not performing as well as’ those from manufacturers.

It runs the risk of infected people being wrongly given the all-clear, and accidentally spreading the virus to others — including the most vulnerable.

Fake rapid swabs claiming to be from FlowFlex — which can give results in 15 minutes —  had incorrect QR codes, were missing the Spanish instruction manuals and had wrong lot numbers.

Those that alleged they were made by iHealth were found to differ in their instructions for how to determine a positive Covid test from the original.

It was not clear where the kits were being sold in the U.S. or how much they cost, but manufacturers said counterfeit products were found being sold at a ‘steep discount’. Anyone who had the testing kits was told to throw them away.

Flowflex tests that are FAKE (left) and REAL (right): The above shows test cassettes — which show the test result. In the fake version there are three squares on the QR code, which are not present on the real one 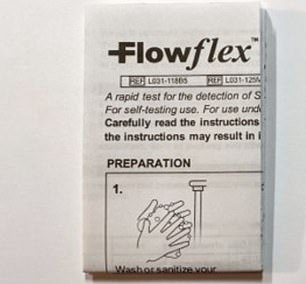 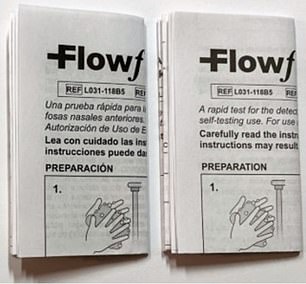 FAKE (top) and REAL (bottom) rapid Covid tests from FlowFlex. The fake tests have a different lot number and include the phrase ‘Self-Testing’. The kit is also labelled ‘SARS-COV-2 Antigen Rapid Test’ rather than ‘Covid-19 Antigen Home Test’ 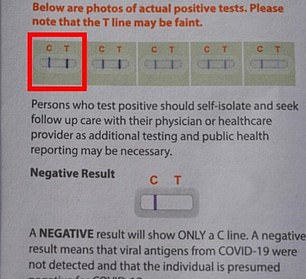 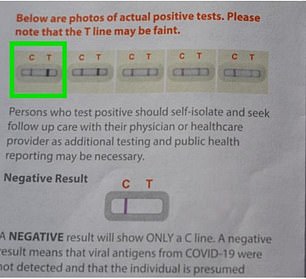 FAKE (left) and REAL (right) rapid Covid tests labelled as iHealth. The Fake versions have a slightly different print in the area describing a positive result, compared to the real ones

The CDC still advises Americans suffering Covid symptoms — including a cough or fever — to test themselves for the virus.

Those who test positive need to self-isolate for five days, and then must wear a face mask for the following five days whenever they leave their home.

Most people have had to buy at least one swab for the virus after the Federal Government only made eight available per household.

When should I test myself for Covid?

Every American is able to order up to eight Covid tests from the Federal Government.

The CDC recommends taking a Covid test in the below situations:

In its warning, the FDA said the tests could lead to someone getting a ‘false-negative’ — when the test tells them they don’t have the virus when they actually do.

They warned this may cause people to ‘unknowingly spreading’ the virus, or ‘delay or stop’ treatment for those who are at risk.

Tests revealed fake FlowFlex tests were ‘not performing as well as’ those from the real manufacturer.

They are yet to review the counterfeit iHealth swabs.

The FDA warned the packaging and components of the fake tests ‘very closely resembled’ the real ones.

But there were key differences between the two.

For FlowFlex swabs, this included the fake tests having just an English instruction manual while the real ones had the guide in both English and Spanish.

Pouches containing the test cassette — which shows the test result — on counterfeits also had the phrase ‘SARS-COV-2 Antigen Rapid Test’ printed on them rather than ‘Covid-19 Antigen Home Test’.

And the test cassette inside carried a QR code with three large squares in its corners in the fake version, whereas the ones from the real manufacturer had no squares on them.

Fake testing kits claiming to be from iHealth were very similar to the originals.

But in the instruction manual, FDA officials found a printing error in the pictures showing what a positive test result from the device may look like.

Officials at healthcare company Acon — which owns FlowFlex —  warned last week they were aware of fakes being sold in the U.S. 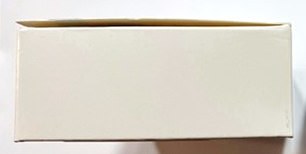 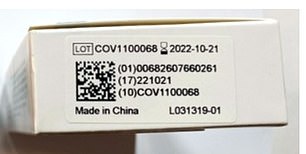 FAKE (left) and REAL (right) Covid test packets labelled FlowFlex. The above shows packets the kits are sold in. Those that are fake do not have a label on the side of the box 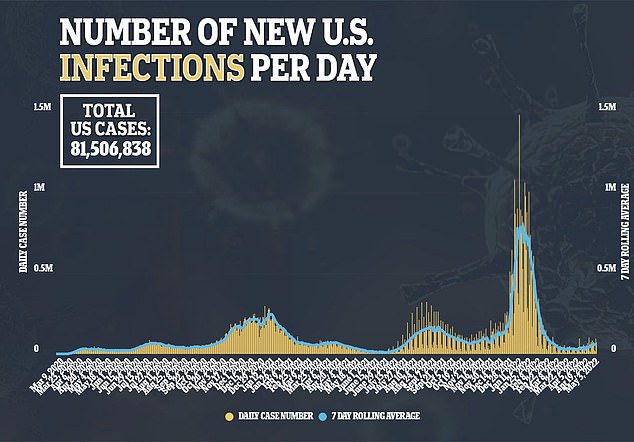 The FDA’s warning comes as Covid cases across the U.S. begin to tick up amid the spread of a more infectious version of Omicron, which is now behind about two in five cases

They said: ‘These counterfeit tests have not been reviewed or authorized by the FDA, but their packaging and components very closely resemble authentic FDA-authorized FlowFlex tests.

‘Consumers should take precautions to avoid purchasing or using counterfeit FlowFlex tests as there can be no assurance that they work properly.

‘Current evidence suggests the counterfeit tests are not performing as well as the authorized tests.’

They said counterfeits had been found being sold at a ‘notably steep’ discount, or claiming to be from Europe, Canada or ‘direct from the factory’ in China.

Test manufacturer iHealth labs has not responded to the FDA warning about fake Covid tests.