Copyright 2021 - All Right Reserved
Home » Peaky Blinders is the most watched show on iPlayer this year, outdoing the Queen’s Platinum Jubilee
Entertainment

Peaky Blinders is the most watched show on iPlayer this year, outdoing the Queen’s Platinum Jubilee

The Queen’s Platinum Jubilee concert attracted more viewers than the FA Cup Final and the Eurovision Song Contest on the BBC’s iPlayer – which posted record figures for the first half of this year.

The streaming service was boosted by broadcasts of TV dramas and live events, with the Platinum Party at the Palace – which included performances by Diana Ross, Rod Stewart and Queen – streamed more than three million times.

It came third in the top ten most watched shows, but was beaten by an episode from the final series of Peaky Blinders, which received more than four million streams.

An episode from the final season of legal drama The Split came second with 3.7million streams.

Peaky Blinders, starring Cillian Murphy (centre), was the most watched show with one episode which received more than four million streams

As well as the Jubilee concert, there were three other live events in the top ten: Saturday’s coverage of Glastonbury festival, watched 2.9million times; the FA Cup Final between Liverpool and Chelsea had 2.7million streams; and the Eurovision Song Contest had 2.4million.

In the three months from April to June, programmes were streamed 1.6billion times.

In the half-year between January and June, there were 140million more streams than in the same period last year.

Dan McGolpin, of BBC iPlayer, said the third quarter ‘is off to a great start with record audiences for the Women’s Euros and Wimbledon. We’re well on track for iPlayer’s best year ever.’ 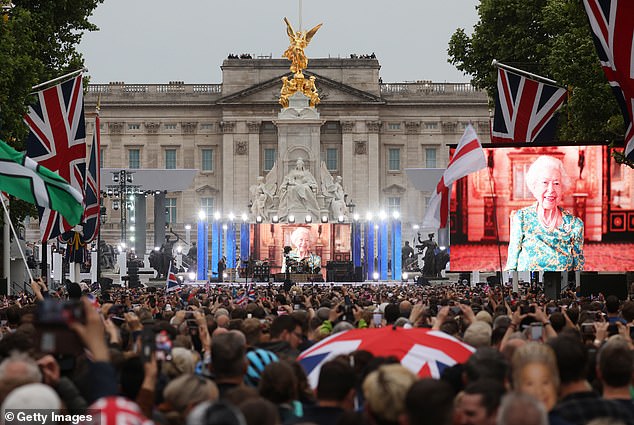 The other shows in the top five box sets were The Split, Silent Witness, Peaky Blinders and Masterchef.

Wimbledon got 18million streams across June and 53.8million for the tournament overall.

EastEnders, which is not included in the top ten list for box sets, got 83million streams in the three-month period.

Mr McGolpin added: ‘It’s fantastic to see our comprehensive Glastonbury coverage coming out on top for viewers with almost 40million streams and there were other events that also brought the nation together, the unforgettable Platinum Party at the Palace, Liverpool’s nail-biting victory on penalties in the FA Cup Final and Sam Ryder achieving the United Kingdom’s best performance in two decades at Eurovision.

Former roommate claims Katie Price ‘took so many drugs’ at the Playboy Mansion in...