Copyright 2021 - All Right Reserved
Home » Jay Aston shares photo of daughter Josie, 18, after she was hospitalised with bacterial meningitis
Entertainment

Jay Aston shares photo of daughter Josie, 18, after she was hospitalised with bacterial meningitis

Bucks Fizz star Jay Aston has shared a photo of her daughter, Josie, after she was hospitalised with bacterial meningitis.

Josie, 18, was rushed to intensive care and put in an induced coma after her organs began to fail last month and she was put in a specialist kidney unit.

Mother of one Jay, 60, took to Instagram on Wednesday to share the first picture of her daughter since she was discharged from hospital, and her husband Dave for her birthday.

Recovery: Bucks Fizz star Jay Aston has shared a photo of her daughter, Josie, after she was hospitalised with bacterial meningitis

Brave: Captioning the snap, she wrote: ‘First trip out with Dave and our daughter Josie on my birthday, at the Crazy Bear lovely! Little steps to recovery. Thanks for all my wonderful Birthday messages’

Captioning the snap, she wrote: ‘First trip out with Dave and our daughter Josie on my birthday, at the Crazy Bear lovely! Little steps to recovery. Thanks for all my wonderful Birthday messages’.

Speaking to Loose Women on Monday, Jay admitted ‘we nearly lost her’ while a newly released photo shows Josie hooked up to machines in hospital and with the meningitis rash covering her face and body. 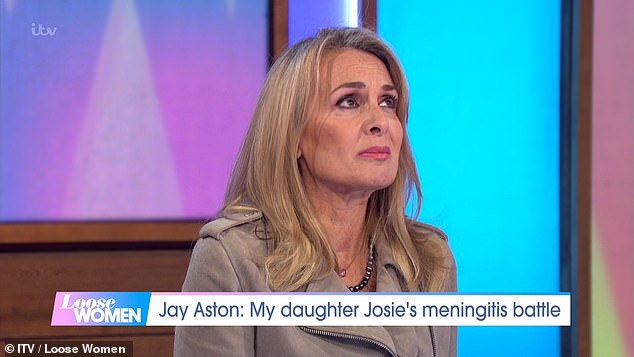 Emotional: Speaking to Loose Women on Monday, Jay admitted ‘we nearly lost her’ and broke down in tears as she broke her silence on her daughter’s Josie meningitis

Over the weekend, her mother took to Instagram to share an update with her fans about her daughter’s condition.

Fans rushed to the comments to ‘send love and prayers’ to the teenager as well as ‘get well soon’ messages.

Jay noticed a rash on Josie’s arm on March 22 after her daughter called her and said she felt unwell after sitting in the garden.

The star recognised the rash and Josie’s other symptoms of a headache, neck pain and a temperature which didn’t come down with paracetamol as meningitis as her husband Dave Colquhoun, Josie’s father, had contracted it 19 years earlier. 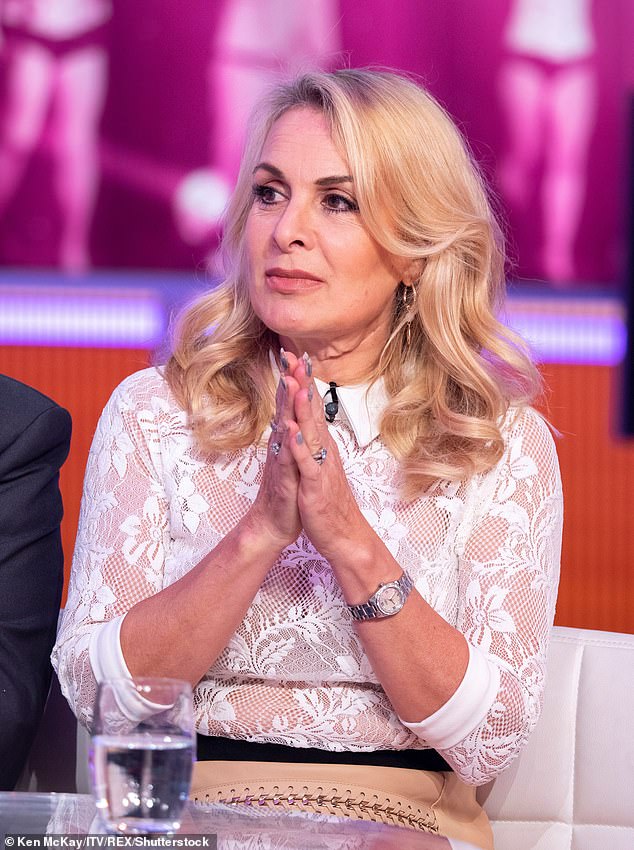 Devastating: Over the weekend, her mother Jay took to Instagram to share an update with her fans about her daughters condition (pictured in 2019)

She rushed her to hospital, which doctors later said saved Josie’s life, and within an hour Josie’s entire body was covered in the rash.

The following day, when her lungs began to fail, she was taken to intensive care where she was put into an induced coma, given oxygen and treated with antibiotics.

Josie remained in the coma for five days, with Jay sleeping beside her bed in a chair, until doctors took her out of the coma, but there was no improvement.

After five days Josie opened her eyes and after a day she began to speak. She was transferred to a specialist unit at Kings College Hospital in London after doctors realised her kidneys had been damaged.

She currently undergoing blood transfusions and kidney dialysis. She also still has a rash on her forehead and knees and has been warned she will have permanent scars on her legs where the rash caused the skin to blister and fall off.

Speaking on Loose Women on Monday, an emotional Jay admitted: ‘We nearly lost her,’ as she described how quickly her daughter’s condition deteriorated. 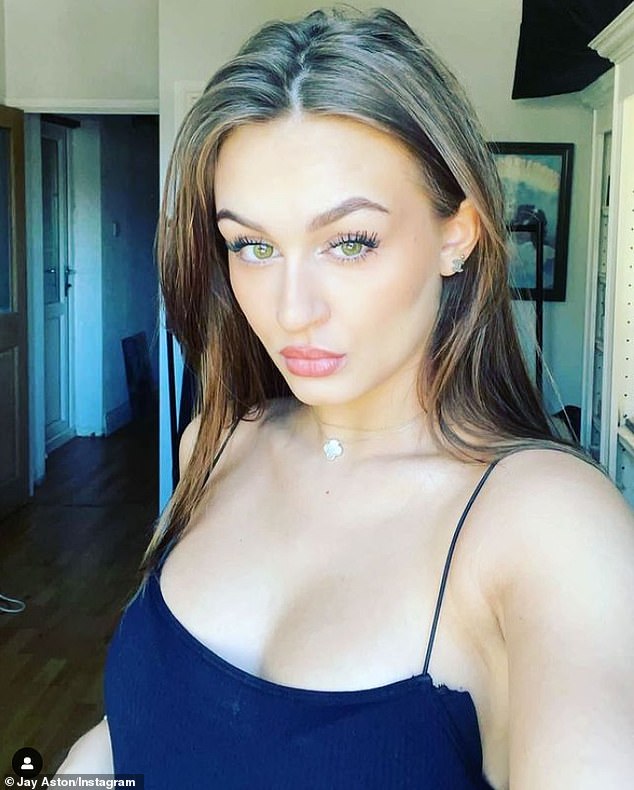 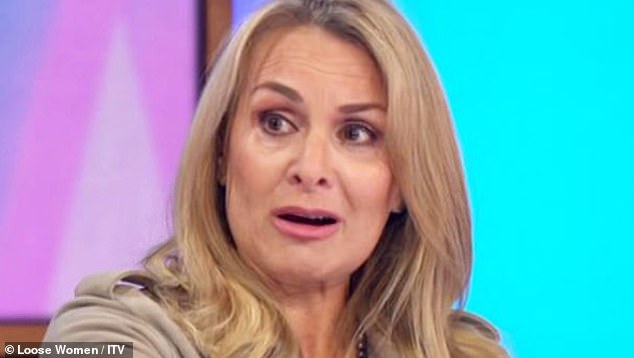 Tears: Speaking on Loose Women on Monday, an emotional Jay admitted: ‘We nearly lost her,’ as she described how quickly her daughter’s condition deteriorated

‘She got into my bed and she didn’t seem well. She started to get a high temperature, she couldn’t get the temperature down. She had an aching neck, joint pain, I thought maybe she had flu.’

‘I called 111 and they send “we’ll send an ambulance” this was about 6.45pm. 11pm, no ambulance, I’m starting to panic… her eyes were glassy, I gave her medication to keep her temperature down. At 3am she said “mum I’m not right”. If she’d gone in her own bed, I don’t think I’d have a daughter.’

‘At 3am, I turned the lights on and said “let’s have a look at you”… my husband had meningitis 19 years ago. She was the silver lining of nearly losing my husband… I saw the rash on her arms. I knew then what it was and I thought “not again’. Her rash was like a blotch. I drove her to A&E and an ambulance man was having a sandwich, he got her in a wheelchair and pushed her through… she was on a drip.’

‘Within one hour she was covered in the rash, literally everywhere. She was petrified. A day and a half later all her organs were failing. We need to put her in a coma, she was in a coma for 5 days. She said ‘mummy I will be awake on Mother’s Day’… she didn’t wake up on Mother’s Day, but she woke up two days later.’ 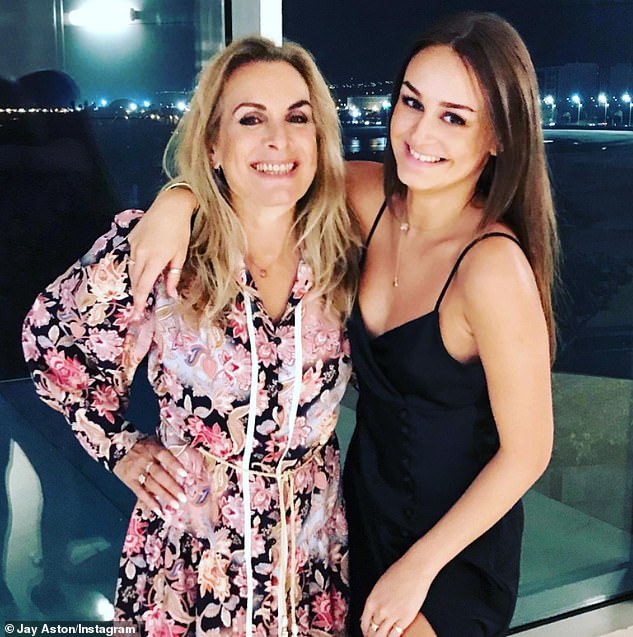 Fighter: Fans rushed to the comments to ‘send love and prayers’ to the teenager as well as ‘get well soon’ messages (the mother and daughter pictured in 2021)

‘I said ‘did you hear us talking to you?’… and she said no ‘I don’t remember anything’. She said ‘I was floating in the universe… she said why am I still asleep, I want to go home, she said I need to text my mum’… that was when she woke up.’

Jay also opened up about her daughter’s condition to The Mirror, saying: ‘It’s been absolutely devastating. We were told it was 50/50 whether she would pull through. We still don’t know when she’ll be coming home.

‘I sat by her bedside night after night willing her to make it. I couldn’t believe this was her fate, because she’s such a lovely person. She’s outgoing, kind, good-willed and full of life. It just felt so cruel. I’ve been doing a lot of praying. She’s my world – we’re ridiculously close. I just couldn’t imagine being without her.’

Bacterial meningitis usually occurs when bacteria enters the bloodstream and travels to the brain and spinal cord.

It is much more serious and rarer than viral meningitis, and one in 10 cases are fatal.

Possible side effects include brain damage, hearing loss and amputation of the affected limbs. 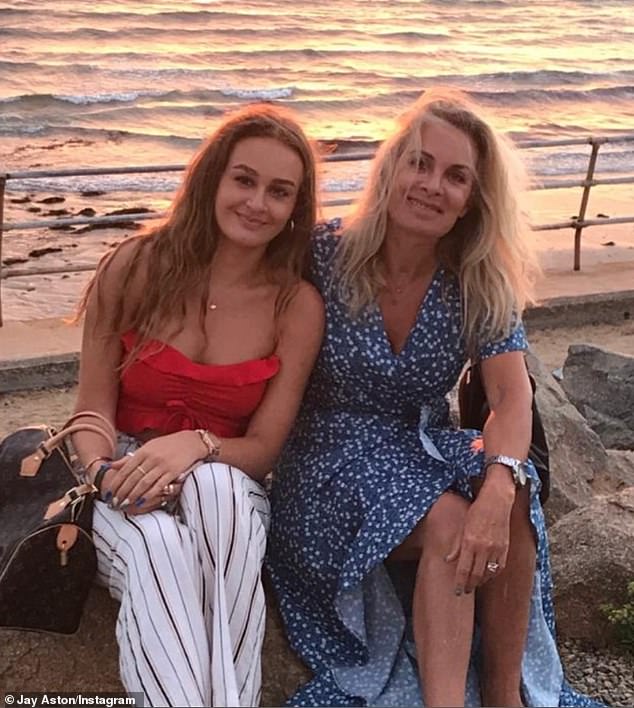 Heartbreaking: Jay opened up about the ‘devastating’ illness and said she was told it was ’50/50 whether she would pull through’ (pictured 2019)

Jay has gone through her own health issues, undergoing seven operations – including having part of her tongue removed – to cure her mouth cancer in 2018 and battling Covid in 2021.

Despite this, she said that the fear of losing her daughter made this the ‘worst month of my life’ and insisted she would ‘swap places with her in a heartbeat.’

Jay says Josie still has a lot of recovery time to go, and wants her story told so people know the dangers of the infection, which can be spread through sneezing, coughing and kissing.

She is hopeful that Josie will be released from hospital this week, but for now is just grateful she is alive, knowing how close she came to losing her.

Meningitis is inflammation of the membranes that surround and protect the brain and spinal cord.

Anyone can be affected but at-risk people include those aged under five, 15-to-24 and over 45.

People exposed to passive smoking or with suppressed immune systems, such as patients undergoing chemotherapy, are also more at risk.

The most common forms of meningitis are bacterial and viral.

Symptoms for both include:

Headache is one of the main symptoms

Some 10 per cent of bacterial cases are fatal.

Of those who survive, one in three suffer complications, including brain damage and hearing loss.

Limb amputation is a potential side effect if septicaemia (blood poisoning) occurs.

Vaccines are available against certain strains of bacteria that cause meningitis, such as tuberculosis.

Viral is rarely life-threatening but can cause long-lasting effects, such as headaches, fatigue and memory problems.

Thousands of people suffer from viral meningitis every year in the UK.

Although ineffective, antibiotics may be given when patients arrive at hospital just in case they are suffering from the bacterial form of the disease.

Gwendoline Christie says starring in Wednesday is the first time she has felt ‘beautiful’...