Among the many outrageous stories of excess and debauchery, one resulted in Sorum knocking out Full House star Dave Doulier, as he attended John Stamos’ wedding to his first wife Rebecca Romijn in Beverly Hills, according to Page Six.

It all went down in September 1998, the year after he had been kicked out of Guns N’ Roses by lead singer Axl Rose. 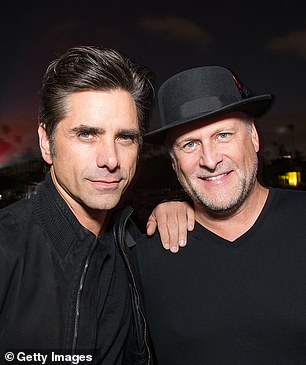 Sorum writes how, following friends’ nuptials, Coulier invited them to an after-party at his place.

What would soon follow, would include heavy doses of alcohol and the rocker finding his girlfriend ‘naked in the Jacuzzi with three random guys.’

The booze was flowing by the time the party kicked into gear at Coulier’s home in Los Angeles.

‘We started doing shots in Dave’s kitchen almost as soon as we arrived,’ Sorum, now 61, explains. ‘After that, we moved on to cocktails. By that point, I noticed that I couldn’t find my girlfriend, so I started looking for her.’

Searching around the home, it didn’t take long before he stumbled upon her in that Jacuzzi bare naked with those three men.

Irate and ready to go on a rampage, Sorum noticed a flowerpot sitting in the backyard.

‘I grab a flowerpot and throw it toward the pool, hurling a chair in the same direction, a second or two later,’ he described the situation. 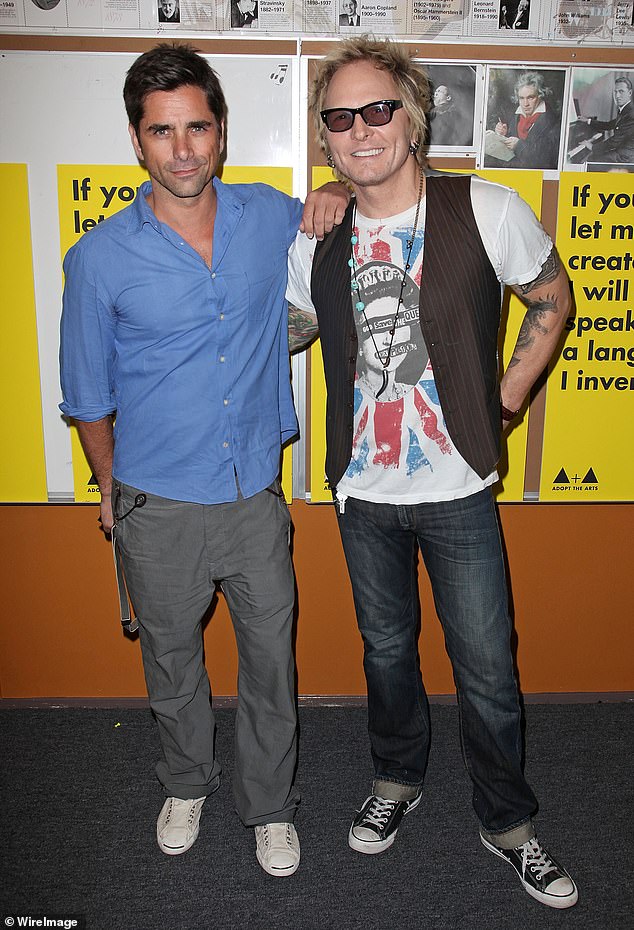 KO blow: Sorum, now 61, wrote how he had found his then girlfriend naked in a Jacuzzi with three random men at Coulier’s house, and then punched the Full House star, knocking him out cold, when he tried to cal down the situation: Stamos and Sorum are pictured in 2012 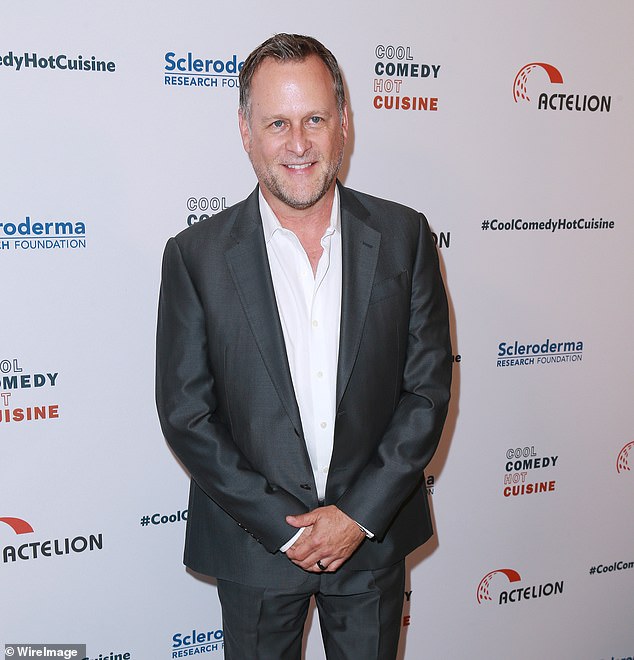 In the buff: Sorum was thrown out of Coulier’s house naked, but somehow he got a cab to his girlfriend’s house, which he proceeded to ransack and break anything in sight; the Full House alum is pictured in June 2017

It’s at this point that Coulier, best known for playing Joey Gladstone alongside Stamos on the hit sitcom Full House (1987-1995), tried to nip things in the bud and calm things down — to no avail.

Explaining his state of mind during that moment as his ‘entire being being reduced to a mix of anger and despair’, Sorum revealed how ‘the guy doesn’t even have time to put his hand on my shoulder before I’ve knocked him out,’ he said, while referencing Coulier.

Although his memories of the evening are a bit hazy, Sorum does recall being thrown out of the after-party and into the street.

‘I alternate between sweating and freezing, and at some point, it dawns on me that I’m naked,’ he confesses.

Despite being naked, himself, the musician somehow managed to hail down a cab for a ride to his girlfriend’s home, jump a fence to get into her house, and then quickly get dressed and find money to pay the driver. 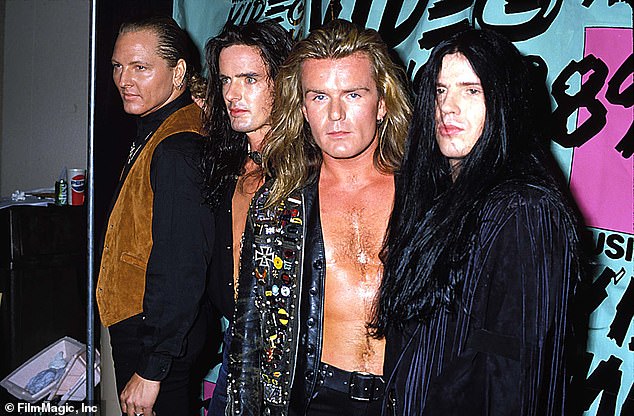 Making his mark: Sorum (left) ended up getting his big break in music when he joined The Cult in 1989; the band had hhad its big breakthrough with three consecutive albums Love (1985), Electric (1987) and Sonic Temple (1989) 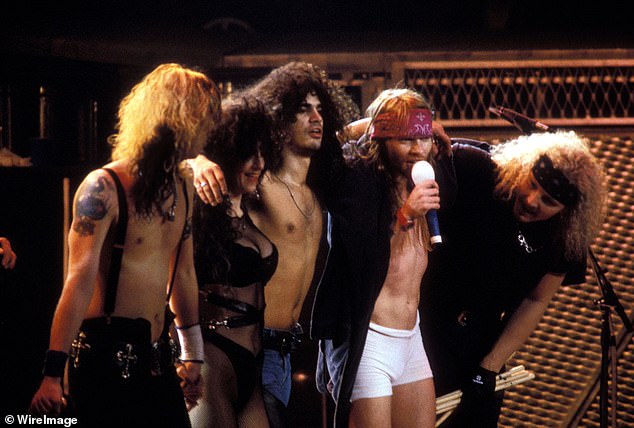 Superstardom: Sorum joined Rock giants, Guns N’ Roses, in 1990 after the band’s original drummer Steven Adler was fired during the beginnings of the recording of their albums Use You Illusion I (1991) and Use You Illusion II (1991); the band is pictured in 1993 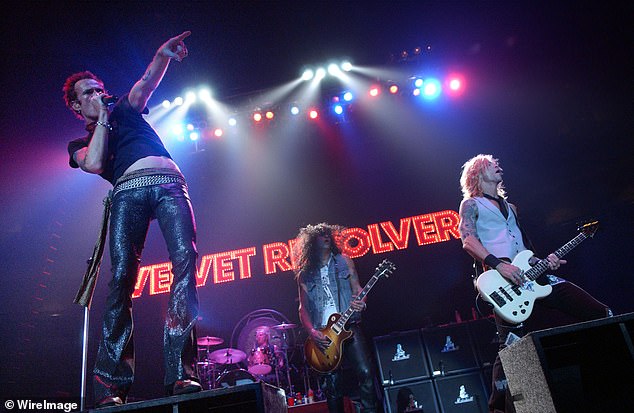 Supergroup: Sorum teamed up with former GNR bandmates Slash, Duff McKagan, as well as Stone Temple Pilots singer Scott Weiland and guitarist Dave Kushner to form the band Velvet Revolver in the 2000s; they are seen in 2004

Still angered over his girlfriend’s escapade in the Jacuzzi, he then proceeded to go back inside the her house and ‘break everything I can find.’

It turns out his girlfriend had returned home by this time, and that ‘somewhere in the distance, I can hear her shouting,’ said Sorum. The next thing he remembers is waking up with ‘two cops on either side of me, their guns in my face.’

Sorum ended up being arrested and locked up in a drunk tank with a ‘disheveled’ old man who recognized him, and asked, ‘Hey rock star…how’s it feel to be down, here in the gutter with us crackheads?’

In his autobiography, the Venice Beach, California native also recounts his childhood that included an abusive stepfather and his salvation through music, which included idolizing The Beatle’s drummer Ringo Starr.

By the time he left high school, Sorum sold marijuana as a means to make money, and escalated his drug dealing to the point where he was ‘smuggling large quantities of cocaine’; a career that came to ‘a halt following a dramatic shoot-out’, according to a synopsis of his memoir on Amazon. 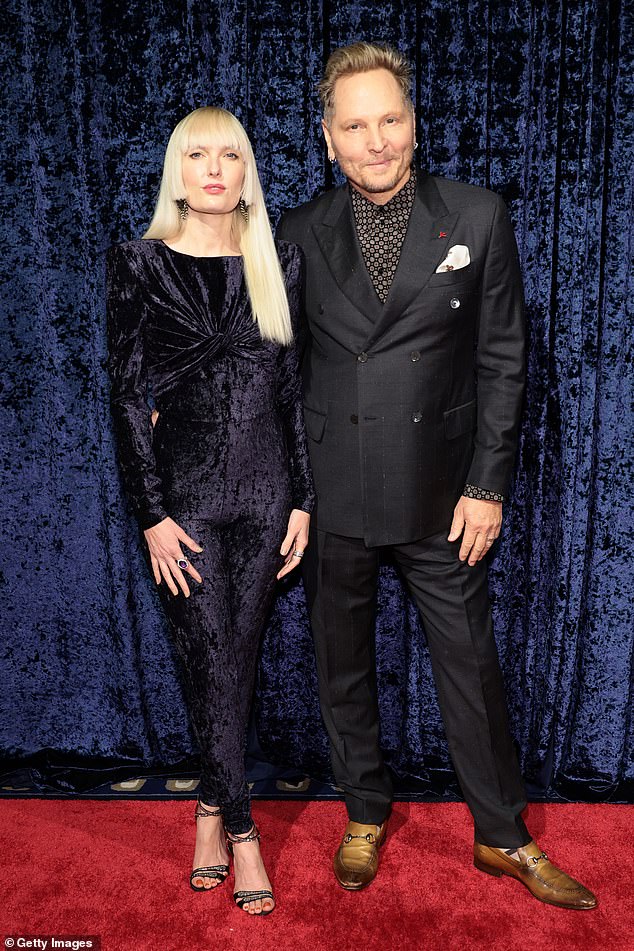 New life: Sorum has a quieter and more grounded life in recent years, which includes his marriage to fashion designer Ace Harper since 2013, the birth of their daughter Lous in 2021

Having fled to Hollywood, Sorum eventually got his big break in music when he joined The Cult in 1989, which would lead to him being asked to join Guns N’ Roses about a year later, when their original drummer Steven Adler was fired.

After recording two studio albums of original music with GNR – Use Your Illusion I (1991) and Use Your Illusion II (1991), and the cover song record The Spaghetti Incident (1993), Sorum was fired by singer Axl Rose in 1997, which by this time the band had been reduced to a shell of what it used to be with the departures of guitarist Slash and bassist Duff McKagan in the previous months.

Like Guns N’ Roses, substance abuse would play a role in the band’s problems in the studio and out on the road, leading to the group’s demise in 2008, and eventual death of Weiland, that was attributed to a combination of drugs and heart disease, in December 2015.

Sorum has a quieter and more grounded life in recent years, since before his marriage to fashion designer Ace Harper in 2013, and the arrival of their daughter Lou Ellington in June 2021. 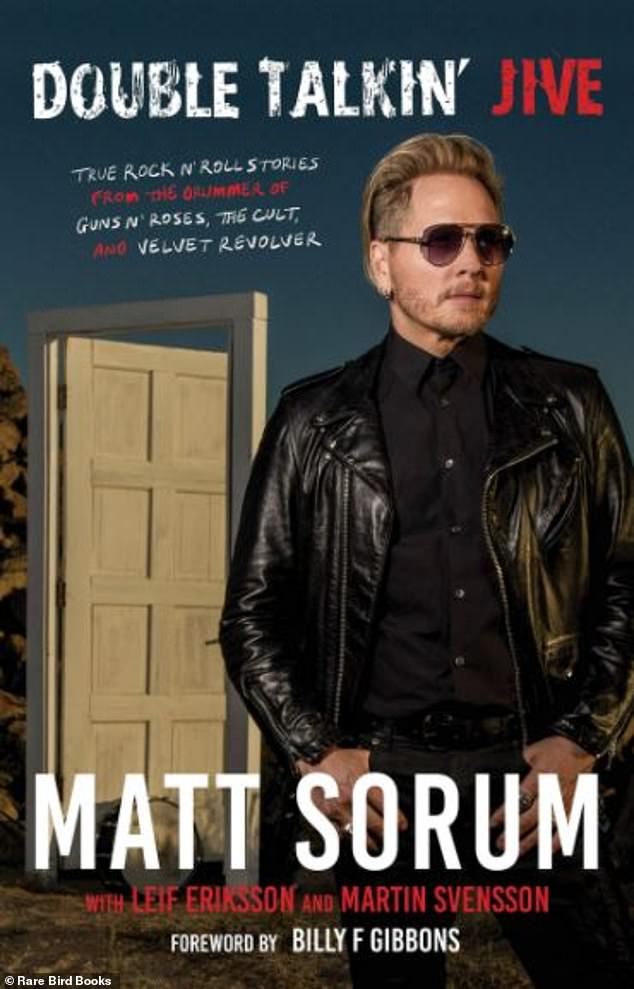 Shane Warne’s son Jackson beams in a slew of selfies