The promised sell-off of Channel 4 can’t come too soon. Britain’s second state-owned broadcaster is in desperate need of privatisation — and if you doubted it, The Great House Giveaway (C4) supplies final proof.

This property makeover show is a straight rip-off of BBC1’s long-running daytime schedule-filler, Homes Under The Hammer.

A house is bought at auction, DIY builders and decorators renovate then sell it, and at the end of the episode we count up their profit. 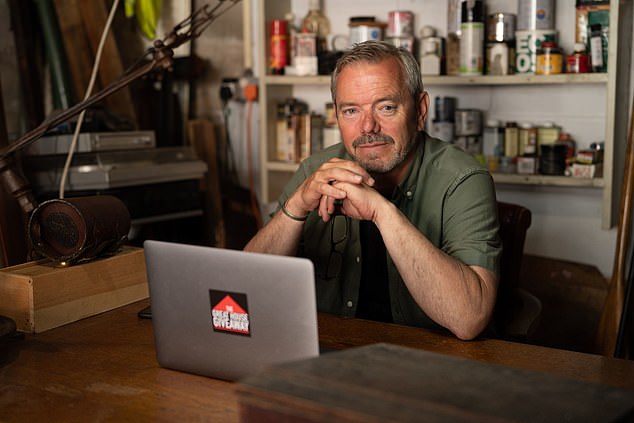 The C4 version, which shifts to a teatime slot all this week, isn’t merely unoriginal. It’s so penny-pinching, it almost pays for itself.

Presenter Simon O’Brien buys a run-down house at auction — this one was a derelict three-bed terrace in Stafford, with wallpaper hanging off in strips and ivy growing through the broken windows. He shelled out £118,000.

Simon handed the keys to paramedic Sarah, 52, living in a rented property with partner Mark, and 24-year-old Paige, who was still at home with Mum. The women hadn’t met before: they were left to get on with the repairs, boosted by a £12,000 loan from Simon.

We watched them knocking through walls, wrestling with flatpacks and boarding over the ceilings — though it looked as if Mark was doing most of the heavy work.When it came to the sale six months later, Paige and Sarah had to pay back every penny — as well as covering the cost of borrowing, taxes, estate agent fees and legal bills.

Heartstrings of the weekend:

It wouldn’t be Britain’s Got Talent (ITV) without a choir, or an Armed Forces tribute, or lots of tears. The Voices of Armed Forces Children’s Choir, with a number they wrote themselves, Welcome Home, had all three. We may have found this year’s winner.

Channel 4 didn’t pay for so much as a tin of paint. Telly doesn’t come cheaper than that.

There’s a place for low-budget property shows, but that place is Freeview stations such as HGTV (the HG stands for Home and Garden). A major broadcaster ought to have much greater ambitions.

Television is no longer a cheapskate medium. Online streaming giants such as Disney+ and Netflix, Amazon Prime and Apple TV+ have transformed the genre.

If this is the best C4 can do at peak time on the Sunday of a Bank Holiday weekend, the channel’s executives should have the decency to admit they have failed.

Whoever buys C4 — expected to be one of those on-demand video behemoths — is likely to have hundreds of millions of pounds to invest, in return for taking the channel global.

After the sell-off, there should be no more primetime hours spent watching people assembling a flatpack kitchen.

If C4 viewers can expect future riches, wildlife presenter Liz Bonnin was a big winner too on Our Changing Planet (BBC1).

‘You’ve just won the lottery!’ a scientist yelled at her on a boat off the California coast.

Liz didn’t collect millions of dollars but she couldn’t have looked more thrilled. A great white shark had just leapt out of the water, yards from camera.

This behaviour is rare in adult sharks. But Liz was looking at a juvenile great white once unknown in the waters off Santa Barbara. Ocean warming means that within a few years, sharks may start breeding as far north as the Alaska coastline — playing havoc with the ecosystems.

With orphaned elephants, and a jaguar stalking the Pantanal wetlands of South America, this was a far more exciting episode than last week’s opener.

Full marks to Ade Adepitan at the Sheldrake Wildlife Trust in Kenya. He tried valiantly to stick to his script without laughing, while a cheeky little Nelly kept bumping his wheelchair.

There hasn’t been a naughtier elephant since one called Lulu flooded the Blue Peter studio floor and trod on John Noakes’s foot, half a century ago.