House prices rise another 12% despite cost of living pressures

House prices rose by another 12.1 per cent in April as many Britons continue to trade up to bigger properties, Nationwide building society has said.

Although the annual increase marks a slight slowdown from March – when property inflation hit its highest level since 2004 – growth has now been in the double-digits for 11 consecutive months.

Despite warnings that the cost of living crisis and rising interest rates would dampen the property market, the average home has risen in price by £29,000 in the last year to a new record of £267,620.

On the more volatile monthly basis, price growth slowed down markedly to 0.3 per cent, from 1.1 per cent in March, marking the smallest gain since September.

Nationwide chief economist, Robert Gardner, said it was surprising that the market has remained so buoyant, given the current rise in living costs.

‘Demand is being supported by robust labour market conditions, where employment growth has remained strong and the unemployment rate has fallen back to pre-pandemic lows.

‘With the stock of homes on the market still low, this has translated into continued upward pressure on house prices.

‘Nevertheless, it is surprising that conditions have remained so buoyant, given mounting pressure on household budgets which has severely dented consumer confidence.’ 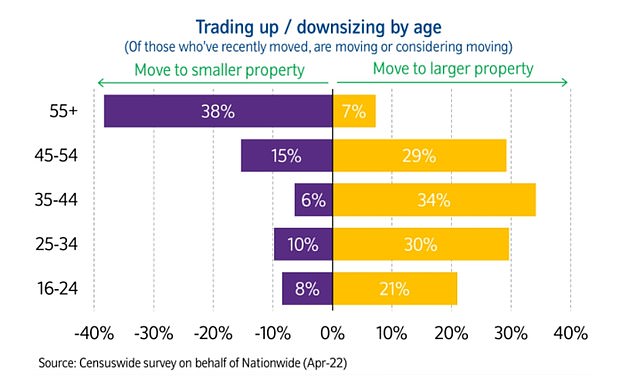 Most movers and potential movers are looking to trade up – the exception being amongst those aged 55 and above who were seeking to downsize, Nationwide said

He added: ‘Housing affordability has deteriorated because house price growth has been outstripping income growth by a wide margin over the past two years, while more recently borrowing costs have increased (though they remain low by historic standards).’

But despite affordability pressures, market activity remains robust and existing homeowners are still looking to trade-up. 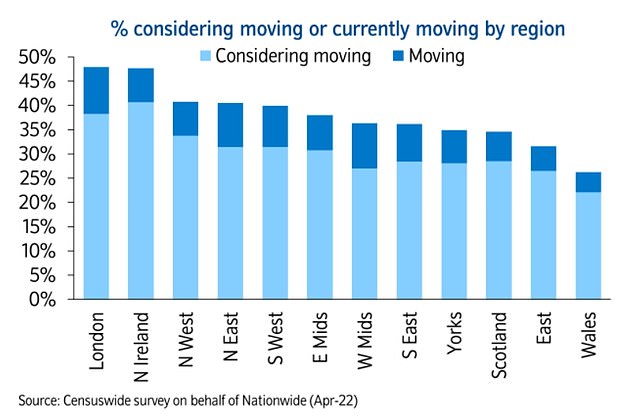 Almost half Londoners said they were considering to move home

Why do house prices keep rising?

The pandemic-induced ‘race for space’ remains a big driver of the UK housing market, Nationwide said, with nearly two in five Britons (38 per cent) saying they were either in the process of moving or considering a move last month.

The proportion was particularly high in London, where almost half said they were moving or considering a move, according to its survey of around 3,000 adults.

The survey results suggest that shifts in housing preferences as a result of the pandemic are continuing to support housing market activity, though to less of an extent than at this time last year

But even in Wales, where the share was lowest, more than a quarter of people were either moving or considering a move.

Nationwide said this figure was ‘very high’ given that only around 5 per cent of the housing stock turns over in a typical year in the UK.

‘The survey results suggest that shifts in housing preferences as a result of the pandemic are continuing to support housing market activity, though to less of an extent than at this time last year,’ Gardner said.

For example, around a quarter of those moving or considering a move said that this was to move to a larger property, a similar proportion to April last year, with the majority still looking for a less urban environment.

However, the proportion of those wanting to get away from the hustle and bustle of urban life or get access to more outside space has declined substantially to 12 per cent and 15 per cent respectively, down from 25 per cent and 28 per cent a year ago. 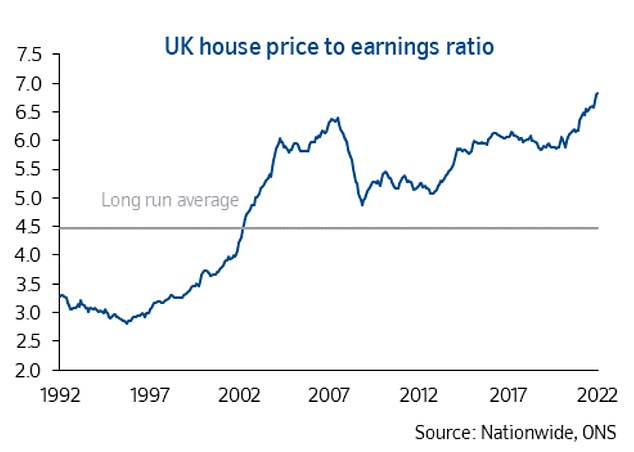 What is next for house prices?

Gardner said Nationwide continued to expect the housing market to slow in the quarters ahead, as the squeeze on household incomes is set to intensify and mortgage rates are set to increase.

Some economists are predicting that prices will fall by 5 per cent in the next two years, wiping out some of the near 20 per cent gains made since the start of the pandemic.

Nicky Stevenson, managing director at estate agent group Fine & Country, said it was unsurprising that prices were starting to moderate, considering the cost of living crisis.

‘Whether this is a harbinger of things to come remains unclear… The correction predicted by many economists is by no means a foregone conclusion, but the growth environment is certainly being challenged by a cost of living crisis, rising borrowing costs and war in Ukraine,’ she said.

She added: ‘Offsetting this has been a supply crunch which has led to bidding wars and a sense of desperation among buyers.

‘With so many moving parts, it’s never been more challenging to predict what may come next on the horizon.’

Anthony Codling of property platform Twindig disagrees with Nationwide about the housing market slowing down in the coming quarters.

‘Nationwide’s own survey suggests that 2 in 5 households are either in the process of moving or actively considering a move,’ he said.

‘When we compare 40 per cent looking to move against around 5 per cent of households actually moving each year we have a case of demand significantly outweighing supply, which we believe will keep the housing market active for some time to come.’

High earners save less to keep lifestyle amid rising prices