Federal Reserve in biggest rate hike in US for 22 years

America’s  central bank has announced the biggest interest rate rise in more than 20 years as it stepped up its fight against inflation.

The Federal Reserve put up its benchmark rate by 0.5 percentage points to a range between 0.75 per cent and 1 per cent.

It was the biggest hike in the US since 2000 and signalled just how worried central bankers are about the soaring cost of living.

On the up: The Federal Reserve put up its benchmark rate by 0.5 percentage points to a range between 0.75 per cent and 1 per cent

The Bank of England is expected to raise rates from 0.75 per cent to 1 per cent, the highest level for 13 years, at noon today. This would be its fourth consecutive rise – a move not seen since it gained independence on monetary policy from the Treasury in 1997.

As recently as December, rates were at the rock-bottom level of 0.1 per cent. While a hike would be welcomed by savers, it will pile pressure on borrowers and mortgage holders who have seen the cost of their debt jump this year.

Central banks usually raise rates when the cost of living is spiralling higher, to encourage saving rather than spending and keep prices down. But officials have been reluctant to bump up rates too fast in the aftermath of the pandemic, fearing that heavy-handed action could throw the economic recovery into reverse.

The Fed said war in Ukraine and lockdowns in China added to the cost-of-living crisis.

It said: ‘The invasion of Ukraine is causing tremendous human and economic hardship. The invasion and related events are creating additional upward pressure on inflation and are likely to weigh on economic activity.’

‘In addition, Covid-related lockdowns in China are likely to exacerbate supply chain disruptions.’ In a twin move to get the cost-of-living crisis under control, the Fed also said it would start to wind up its massive money-printing programme.

It snapped up bonds from investors at an eye-watering rate in the pandemic, injecting money into the economy as it more than doubled its holdings to around $9trillion (£7.2trillion). It starts selling these assets on June 1. 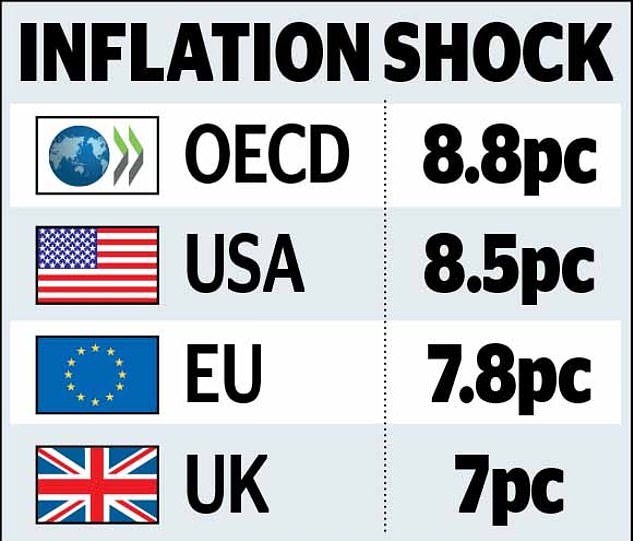 Richard Carter, of investment firm Quilter Cheviot, said: ‘The Fed has finally recognised it is behind the curve on inflation and decided it had no choice but to act aggressively.

‘How long it stays in aggressive mode remains to be seen and relies on many factors that aren’t necessarily in their control.’

Traders seemed relieved that the Fed wasn’t even more aggressive, as its language suggested the rate hikes to come might not be as long as initially feared.

Elsewhere, the Organisation for Economic Cooperation and Development (OECD) showed inflation across its 38 members hit 8.8 per cent in March – the highest for 34 years – as energy prices rose 33.7 per cent in the year to March.

Seven OECD countries have double-digit inflation, including Turkey where it is 61.1 per cent.

What is capital gains tax and how much is it?