A drive to seek out the poorest pensioners in the country to urge them to sign up for pension credit has been launched by finance industry campaigners.

Under the slogan ‘Pension credit – it’s for you!’, they aim to use the private sector’s vast data resources to identify and come to the aid of elderly people with limited savings and income, who are likely to be hardest hit by rising living costs.

In the longer run the pension dashboard, scheduled for launch in 2025, will flag the ‘free money’ available, while finance firms will work on a way to automate applications, according to influential industry veteran Henry Tapper.

Pension credit: You need to be over state pension age and live in the UK to make a claim

But Tapper also stresses that it is ‘the door to more’, because you can gain thousands of pounds on top via help for housing, heating, council tax, TV licences and other bills.

The Department for Work and Pensions has tried to publicise pension credit and currently has a working group devoted to this effort.

Tapper recently joined this taskforce, after publicly decrying current ‘feeble’ take-up and declaring he would galvanise the private sector to help declutter and automate the system.

How to apply for pension credit

You can apply yourself by phone, online or by post, or a friend or family member can do this on behalf of an elderly person.

Age UK has a help page here, and a free national advice line on 0800 169 65 65 where  staff will check you are receiving everything you are entitled to, including pension credit and attendance allowance.

Many elderly people don’t know about pension credit, are unaware how to apply, or reluctant to accept help.

An estimated 850,000 households – around one in three that are eligible for help – are not claiming and missing out on some £1.7billion worth of assistance.

This led Tapper to launch a private sector initiative with Gareth Morgan, boss of benefits adviser Ferret Information Systems, and the pair have already drummed up support from Virgin Money, fintech firm Inbest.ai, social policy software and analytics firm Policy in Practice and charity for the elderly Independent Age.

Tapper and Morgan have compiled a preliminary report on boosting take-up of pension credit and are working on a full feasibility study they intend to deliver to the DWP.

They say that the Government has convened a 30 strong working group on pension credit, all but three of whom are from the public sector – and until the two of them asked to be on it, only one person came from the private sector.

The report says that the private sector has two things lacking in the public sector, data and financial resources.

‘The main limit to scaling this work are barriers to data sharing within the DWP, and councils having the resources and bandwidth to run effective campaigns,’ says the report.

It adds that Virgin Money partners with benefits information website Turn2Us to help people ensure they are not missing out, and Inbest.ai uses customer data to identify and help people eligible for unclaimed benefits.

Tapper, who chairs industry networking platform Pension Playpen, says of his and Morgan’s project: ‘This is a rallying call to the UK’s key influencers, the charities, the banks, the insurers, the pension trusts, the utilities and other services supporting pensioners to support the ‘Pension Credit – it’s for you!’ campaign.

Many will have no idea that pension credit even exists. Many are women. Some may be income poor and housing rich and feel they won’t be eligible, but you can’t buy a sausage with a brick

‘With the current cost of living crisis, the sense of urgency couldn’t be greater.’

He adds of those missing out: ‘Many will have no idea that pension credit even exists. Many are women. Some may be income poor and housing rich and feel they won’t be eligible, but you can’t buy a sausage with a brick.

‘What’s more, pension credit is the “door to more”, topping up what people get from the state to a level approximate to the full state pension, whilst unlocking many smaller state pension benefits to get help with housing, fuel, and even free TV licences.

‘So far, the private sector has been reluctant to use its money and the data it holds to ensure pensions are topped up. With the backing of the Pensions Minister we aim to get as many organisations and supporters on board to help these 850,000 households access the money and other support they will likely desperately need.’ 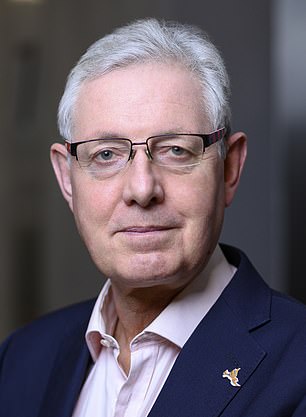 Henry Tapper: ‘With the current cost of living crisis, the sense of urgency couldn’t be greater’

Pensions Minister Guy Opperman says: ‘We want to ensure pensioners receive all the support to which they are entitled and continue to work closely with stakeholders and others to increase awareness of pension credit.

‘The latest figures show take up of pension credit is at its highest level since 2010, with the number of new claims 30 per cent higher in 2021 compared to 2019.

‘However, I know there is more work to be done and I look forward to seeing the recommendations that emerge from the feasibility study.’

You need to be over state pension age and live in the UK to make a claim.

Tapper says women are more likely to be in the 850,000 non-claiming households, because most men get the state pension in full but many women do not.

People who are ‘income poor but housing rich’ are also more likely to miss out, because owning your own home doesn’t mean you have enough to live on, he adds.

Tapper notes that homeowners who are entitled to pension credit are much less likely to be receiving it than renters.

He suggests the main reasons for not claiming are:

– Knowing of it but thinking it’s not for you

– Being confused into thinking that applying may invalidate other benefits.

‘Pension Credit – it’s for you!’: How can the private sector help?

1. Banks, insurers, and pension providers can identify customers who are potentially vulnerable, the report says.

They have low incomes, low contributions, low balances, and they can’t afford advice.

Vulnerable customers over the state pension age can be nudged towards applying for pension credit.

2. In the medium term, the pensions dashboard will allow for a consolidated statement of income and savings from the state and private pension schemes.

The pension dashboard can be used to flag potential claimants, it can also be used to pre-populate pension credit applications with real time information.

3. In the longer term, the private sector can help the DWP to automate the application process for pension credit so that it is paid alongside the state pension to those who were eligible for the benefit.

Sir Steve Webb, former Pensions Minister and partner at LCP, says: ‘Anything that can be done to boost take-up of pension credit has to be a good thing, especially with the pressure on the living standards of pensioners.

‘The pensions dashboard had the potential to help identify people who may be entitled as it brings together all people’s pension entitlements in one place.

‘But the Government’s decision to exclude retired people from the dashboard makes this a missed opportunity.

‘As the campaigners point out, pension credit is very much a “door to more”, with knock-on benefits including free TV licences for the over 75s and energy bill discounts.

‘Simple, bold messaging about these extra benefits could be the most important thing which both government and the private sector could do.’

Another former Pensions Minister, Ros Altmann, says of Tapper’s campaign: ‘This is a great initiative and really important.

‘Pension credit take-up is lowest of all means-tested benefits, remaining around 60 per cent since 2010 and Government efforts to improve take-up have not yet helped.

‘Official figures show that over 90 per cent of the income of the poorest pensioners comes from state support, so those who don’t receive all the money they are entitled to will struggle to make ends meet – and will be even worse off now in the middle of the cost of living crisis.

‘There are many reasons why pensioners do not claim, including complexity, form-filling aversion, pride, reluctance to divulge information, and many just don’t know about this benefit.

‘Some wrongly believe they are not eligible and don’t realise they can have up to £10,000 in savings and still be eligible for small amounts of pension credit, which can then open the door to other valuable benefits, worth thousands of pounds a year.’

Lady Altmann adds the name ‘pension credit’ is not well understood by many pensioners who live alone, especially elderly women who are not online.

She urges anyone who knows older people, relatives, friends or neighbours who might benefit from a ‘pensioner top-up’ to help them find out more (see the box above for how to apply).

How to make a home bar: Tips from interiors experts