After three months of ‘nightmarish’ fuel price rises, April provided a much-needed break from the ever-increasing pain at the pumps for motorists, according to data revealed today.

The average price of petrol dropped by 0.5p-a-litre to 162.75p over the course of the month, while diesel remained flat at 177p from the beginning to the end of April, says the latest RAC Fuel Watch report.

However, the brief respite from the escalating cost of filling up should have seen prices cut by more, had retailers passed on the full extent of savings at the beginning of April.

And in a new bitter blow for hard-up motorists already facing a cost of living crisis, experts warn that prices could be back on the rise in May and hit the wallets of those planning trips over the Queen’s Platinum Jubilee weekend in early June.

Rocketing petrol and diesel prices have generally softened since Chancellor Rishi Sunak announced on 24 March a 5p-a-litre reduction in fuel duty in his Spring Statement to help the public in the face of rising living costs.

This means the cost of filling a 55-litre family car from empty is 50p less than it was at the start of the month at £89.51, while it costs £97 to brim the tank of an equivalent-size diesel.

Using the notional figure of 40 miles per gallon, the RAC estimates that every mile is now costing petrol car drivers 18.5p and diesel owners almost 20p.

And it’s even more expensive for those who fill up at motorway services, with average prices rising by almost a penny a litre last month.

These figures suggest that Mr Sunak’s tax break on fuel hasn’t dramatically brought down the cost of filling up, though it has at least seen prices taper in recent weeks.

The trimming of fuel duty has mostly been cancelled out by oil prices remaining relatively high during April.

While the price of oil dropped under $100 three times over the course of the month, the barrel price finished slightly higher than it started April at $108.62 ($107.52 on 1 April).

In an added blow for Britons, the pound also lost ground on the dollar, falling from $1.3 to $1.25 over the month. With fuel traded in dollars, this also impacted wholesale prices paid by fuel companies. 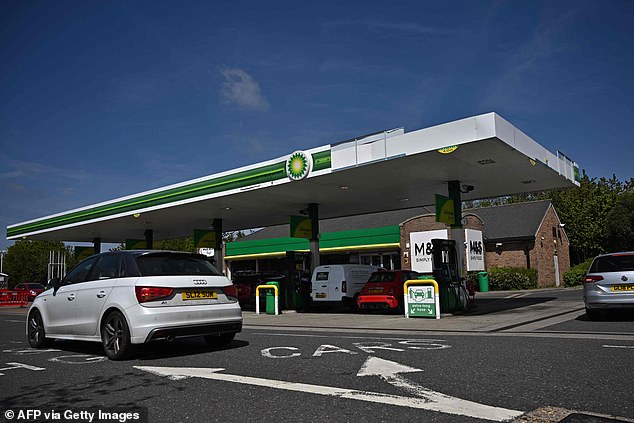 While the cost to fill up across the UK fell marginally, average prices at motorway services continued to rise by almost a penny a litre

The RAC’s fuel spokesman Simon Williams said retailers should have been quicker to pass on savings they were benefitting from when wholesale prices were lower at the beginning of April.

‘Instead, the biggest retailers, which buy most frequently held out, protected themselves from future rises,’ he said.

‘They will no doubt feel they were justified in not lowering their forecourt prices as wholesale costs are now rising again, in part due to the pound losing ground on the dollar, making it more expensive for retailers when they buy new stock.

‘It’s also very much the case that retailers’ margins were far higher in April than they were in March. RAC Fuel Watch data estimates they took around 4p more a litre than they did over the course of the previous month.

‘This will surely be a disappointment to the Chancellor who cut fuel duty by 5p a litre in the Spring Statement.’ 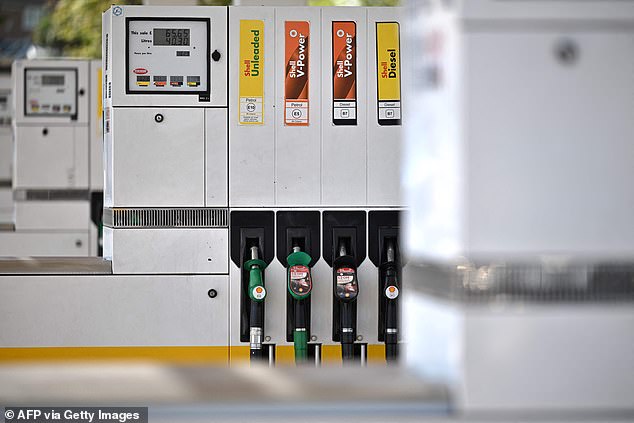 Earlier this week, the AA warned that petrol and diesel prices could hit new records within weeks – just in time for the Platinum Jubilee bank holiday getaway in early June.

Its analysis found that wholesale prices surged by 5p a litre last week – a rise which takes two to three weeks to be passed on at the pumps.

It could mean a repeat of the situation seen in March and sparked new record highs at the pumps.

A spokesperson for the AA said: ‘Drivers need to brace themselves for a jump in the cost of petrol.’

SAVE MONEY ON MOTORING

Plumbing boss Charlie Mullins talks to ME & MY MONEY

MIDAS SHARE TIPS: Why life sciences start-up could be a wealth booster

Sir Rocco Forte: Business is being used as a cash cow