Annual electric car running costs are £1,000 higher if you can’t charge at home

Drivers who had already switched to an electric car – or plan to do so – will have to pay £1,000 per year more to charge one if they don’t have a garage or driveway at their property, according to new research.

A study by electric car website Electriying.com found that motorists reliant on using the public charging network because they are among the third of Britons who don’t have off-street parking can expect their bills to be almost £80 a month more expensive.

The cost to access public devices is much higher than charging at home, despite the recent rise in domestic energy bills. This is mainly due to higher taxation on electricity sourced from the chargepoints in public places.

The report said the gulf in running costs makes electric car ownership ‘less attractive to drivers living in smaller properties within cities’, which is where the Government wants to reduce air pollution levels the most.

Can’t charge an EV at home? Expect to pay around £1,000-a-year more to run one, warns a new report published this week

The electric vehicle site says that drivers with access to their own private charge point who use a cheap night tariff are still saving thousands over the lifetime of their cars compared to those who are reliant on the public charging network.

This is in part due to the higher VAT rate of 20 per cent on public charging points and prices set by operators also reflecting the cost of installing and maintaining the infrastructure.

The research figures are based on a person driving a Volkswagen ID.3 for 10,000 miles per year.

This would cost £13.75 per month when charging at home on a cheap night rate.

Charging costs for owners could be even lower for those who have an EV-specific energy tariff, though these are currently few and far between during the cost of living crisis. 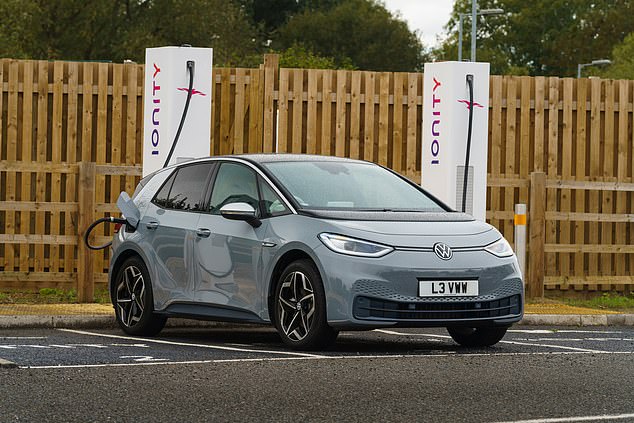 The cost of charging at home and exclusively via the public network was calculated for running a Volkswagen ID.3 hatchback for 10,000 miles per year 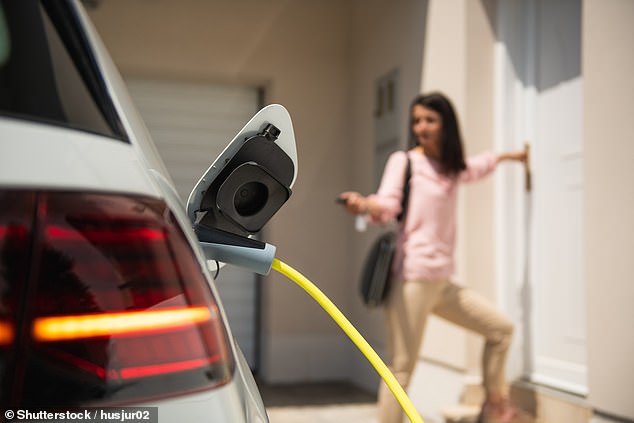 If electric car owners with their own homecharger only plug in during peak hours, that monthly cost rises to £56 a month.

However, the cost to use the public network is quite a bit higher.

Electrifying.com calculated that monthly charging outgoings to use a public charge point at 50p per kWh – which is the typical rate for a DC rapid charger found at a service station or supermarket – is a whopping £91.75.

The research is based on driving a Volkswagen ID.3 with a 58kW battery for 10,000 miles/year.

£13.75 per month if charging during cheapest night rate hours

£56 per month if charging during peak rate hours

£123 per month for a petrol-powered Volkswagen Golf, based on £1.62-a-litre for unleaded

The difference to charge the electric VW is £78 per month, which works out at an astounding £936 extra for those who live in flats or properties with no designated parking.

To put these running costs into context, a petrol-powered Golf – the combustion-engine equivalent to the ID.3 hatchback – costs £123 a month to fuel, based on unleaded being priced at 162p per litre.

Electrifying.com said the stark difference between charging costs for those with and without off-street parking is ‘driving a two-tier nation when it comes to electric car ownership’ that ‘favours homeowners with a driveway who typically live in more affluent and suburban areas and discriminating against those on lower incomes without access to parking at home’.

Latest housing records show that around a third of UK properties are without off-street parking provisions, forcing electric and plug-in hybrid car drivers to either charge at their work place of rely entirely on the public network at premium prices.

‘It also makes electric car ownership less attractive to drivers living in smaller properties within cities, which is the very place zero emission vehicles can make the biggest difference to air quality,’ the report adds.

Earlier this year, a national campaign – which was backed by the RAC – called for ministers to end the ‘unfair’ VAT on public charging.

However, the request was rejected by the Government at the end of March.

Following discussions in the House of Commons, Exchequer Secretary Helen Whately stated: ‘The Government has not specifically introduced a reduced rate for charging EVs at home.

‘Applying the reduced rate of VAT to electricity supplied at EV charging points in public places would come at a cost. VAT makes a significant contribution towards the public finances, raising around £130billion in 2019/20, and helps fund the Government’s priorities including the NHS, schools and defence.

‘Any loss in tax revenue would have to be balanced by a reduction in public spending, increased borrowing or increased taxation elsewhere.’

Whately added: ‘The Government has no current plans to review the current rate of VAT applied to EV charging.’ 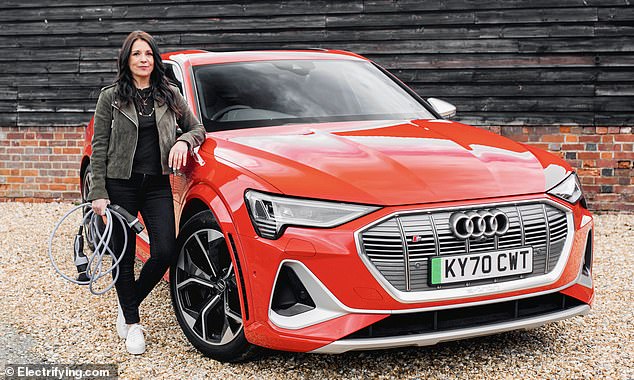 Despite this rejection, Electrifying.com CEO and founder, Ginny Buckley, has again demanded for VAT on public charge points to be reduced to 5 per cent, which would bring it in line with the cost of charging at home.

She is also calling for energy providers to introduce cheaper night tariffs at public charge points to help balance the supply grid.

‘As a country, we need to do better when it comes to the levelling up of electric car ownership. Car buyers have embraced the electric revolution – last month was the best yet for registrations with nearly an 80 per cent growth, and we expect figures this month to be similar,’ Buckley said.

‘But electric car ownership should not be a privilege for the more affluent, and if we want to bring everyone along on the electric journey, we need to ensure that the right infrastructure is in place – and at the right price – so that everyone can make the switch with confidence.’

‘While promises to support drivers by providing ten times as many public chargers by 2030 across the UK are welcome, it’s unfair that those without a private driveway pay more to run their car. Without taking steps now, we risk leaving people behind and creating a two-tiered nation when it comes to making the switch, which is why I’m urging the Treasury to look again at VAT on public charging.

‘The biggest saving from switching to electric comes from the overall running costs and with petrol prices rising to record levels, driving electric gives us the opportunity to gain energy independence through using renewable power for our cars, now and in the future.’

SAVE MONEY ON MOTORING

Are YOU on a sucker list? Scammers compile databases of scam victims